Some fairly simple statistics can yield some interesting findings and many a rabbit-hole to crawl down. One such is a basic method of looking at a team’s pace of play, by looking at how many passes they make on average per shot they take (and the same for their opponents). 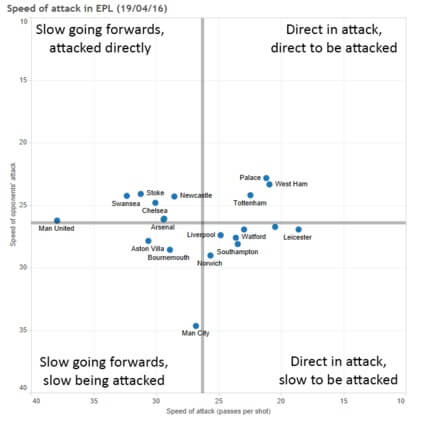 There are a few teams that feature in clumps together (unhelpfully, Arsenal and Everton overlap almost completely, see the chart here to find teams and the exact numbers), but the one that caught my eye was West Ham and Crystal Palace.

West Ham are a team largely considered to be over-performing their underlying statistics, while Crystal Palace looked to be flying high earlier in the season and have spent much of 2016 plummeting. Both have been noted for playing quite direct forms of football (demonstrated by the chart above), and this type of quick-paced, shoot from distance or cross into the box, pounce on loose balls football may be more susceptible to larger swings in conversion.

On raw shots (as of before the 16/17 April round of fixtures), West Ham, though still appearing average, are a bit ahead of Crystal Palace – the Hammers are on a -0.7 difference per game, the Eagles -2.2 per game. However, looking at shots on target and shots in the box the difference is far smaller. West Ham have a +0.2 difference per game for shots on target, Palace -0.2; for shots in the box West Ham are on -0.5, Palace on -0.2.

This similarity in the shot numbers is supported by Paul Riley’s shots on target expected goals model, which has the two teams 10th and 11th on Expected Goals Difference, the Hammers -0.61 just a little above Palace’s -1.09. 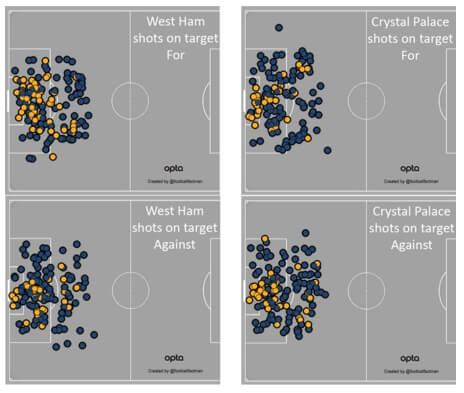 The maps of their shots on targets are, unsurprisingly, fairly similar. One notable difference are the clumps of shots just outside the box on each corner for Crystal Palace, possibly where wingers have cut inside and taken a punt, which don’t quite appear in the same way for West Ham.

So, why are one team in discussions about the top 4 race and the other faintly in discussions about relegation? It could be that the shot numbers and expected goals models aren’t capturing something special that West Ham are harnessing but Palace aren’t able to. It could be, in this season of unlikely things happening, that both are being affected by somewhat unlikely conversion rates to some extent.

Danny Page’s xG simulator shows the likelihood that a team’s shots will become a certain total of goals, the real life total and the distribution helping to visualise this further. 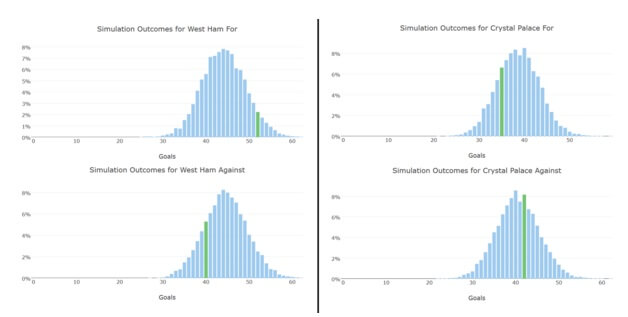 In reality, the differences between the two teams may not be as narrow as those statistics suggest, but it sure looks like the seasons of West Ham and Crystal Palace are two sides of the same coin, to some extent at least.

[http://objective-football.blogspot.fr/ and http://www.footballintheclouds.blogspot.fr/ were also used for this article and are helpful resources. Statistics correct as of time of writing]