When many think of Atalanta, their thoughts initially jump to their amazing attacking weapons like Josip Ilicic, Alejandro “Papu” Gomez, Duvan Zapata, Ruslan Malinovskiy and Luis Muriel or their flying wing backs such as Hans Hateboer, Robin Gosens and Timothy Castagne.

Delve a little beyond their most eye-catching performers, however, and there’s so many others that warrant special mention for their efforts towards Gian Piero Gasperini’s team’s success. One of these men is unquestionably rugged, hard nosed central defender, Jose Luis Palomino.

A real leader within La Dea’s high octane team, the Argentine sets the tone for his teammates to follow with intensity, aggression and his never say die approach. Now in his third season with the Bergamo based outfit, the journeyman, who’s also enjoyed stints in France, Bulgaria and in his homeland, Argentina, has grown into a key player under Gasperini’s expert tutelage.

Suiting his all action style down to the ground, Atalanta’s relentless man marking style embodies his fighting qualities perfectly, as he relishes physical confrontations and engaging in and winning duels.

A fierce presser, Palomino is a master at reacting to his opponents’ movements, for he gets touchtight to them so they can’t turn him or execute their actions cleanly. Imposing himself on his man, this ensures they never enjoy an easy touch and are constantly thinking about when the pressure will arrive. 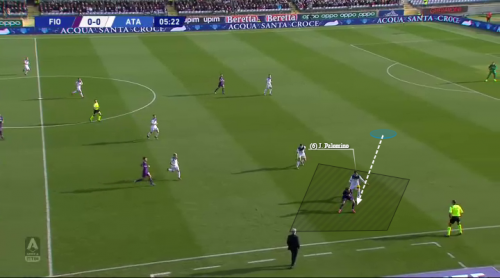 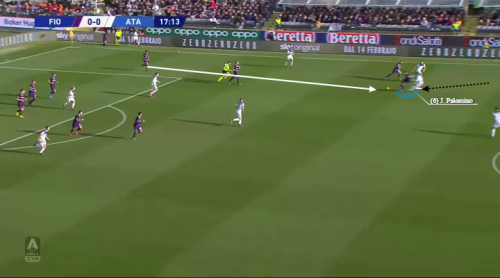 Although his ferocity can cause him to give away many fouls (roughly two a game), Gasperini wouldn’t mind seeing this, as he’s only following his instructions. Moreover, these fouls while crude at times can actually be of great benefit to his team, as they can stop counters and quick transitions before they develop.

The combative stopper accompanies the afore with a sound positional sense when not pressing a marker directly, for he’ll maintain his shape, step up, drop back or shift across in unison with his backline. 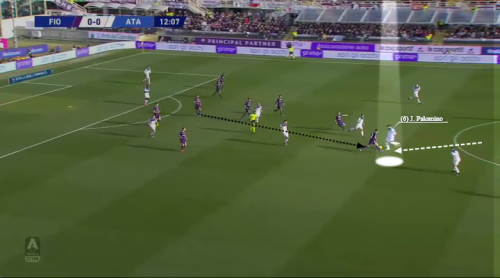 Palomino’s stepping out conviction to break up the counter attack 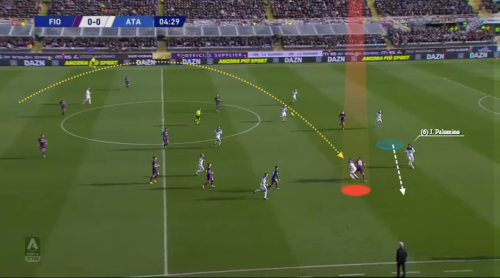 Despite not being blessed with searing pace, Palomino makes up for this by reading the play well to track runners in behind and into the channels. Awake and sharp to react to their movement he gets on his bike and will often impede them and limit their momentum by shouldering or putting a subtle arm across them.

Seeing as Atalanta commit so many numbers forward, with both fullbacks and often one centre back overlapping ahead joining the attackers, this can sometimes tend to leave them exposed, but Palomino’s been solid in snuffing out danger if teams break through Atalanta’s counterpress.

Formidable in aerial battles too, the sturdy defender competes manfully in these situations, as his size, strength and judgement ensure he wins a good portion of his headers. His prowess here means he can read the ball’s trajectory quickly so he can cut out crosses and cutbacks, be an asset on set pieces at both ends and win second balls following long balls and goal kicks.

Palomino’s nicely positioned to cut out a cross 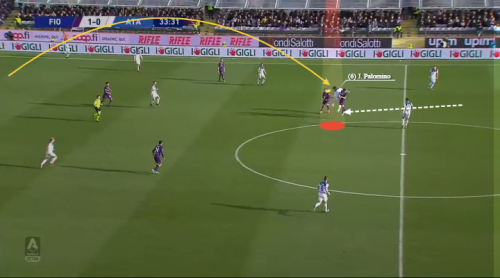 Brave, experienced and a real leader of La Dea’s backline, his influence has been integral towards his team’s defensive efforts that see them have the seventh best defensive record in Serie A.

By the numbers, his 7.01 interceptions per game, 3.2 tackles pg, 2.61 won aerial duels pg, 2.60 clearances pg and roughly one blocked shot pg demonstrate what a power of work he gets through.

Upon watching him consistently prove himself as a quality Serie A defender, it’s remarkable that he persistently gets overlooked for an Argentina national team call up, for his form certainly deserves selection. Although there’s still time for the 30-year-old to make his Albiceleste debut, it must be frustrating for him to continually miss out even though his performances both in the Champions League and Serie A have been of a high standard overall.

Only time will tell if he’s rewarded by Argentina coach Lionel Scaloni, but for now you can guarantee he’ll keep doing his best and be appreciated for his work by grateful Gasperini and his Atalanta teammates.