Since joining Real Sociedad on loan this season, Martin Odegaard’s made quite the impact for the Basque outfit.

After two seasons in the Eredivisie with Heerenveen and Vitesse respectively, which proved crucial in the Real Madrid loanee’s development, Odegaard’s well on his way to fulfilling his potential. The 2018/2019 campaign was especially brilliant for him, as not only did he rack up 11 goals and 12 assists but also made the Eredivisie team of the season.

It’s amazing to think the Norwegian starlet’s still just 20 and that it was four years ago that Los Merengues snapped him up. With his development heading in a steady upward trajectory, this trend certainly looks set to continue at La Real.

Working within Imanol Alguacil’s attackingly geared framework that Odegaard is an integral component in, he’s started the new season brilliantly. Playing in an offensively minded central midfield role, he’s relished the freedom afforded to him, as he’s been a key driving force behind their solid early season form.

Possessing exquisite control and a lovely first touch, the fleet footed, quick thinking youngster has been superb with the ball at his feet. So good at progressing the ball forward, beating his man 1v1 or weaving out of trouble, his ball carrying has been crucial towards his effectiveness. Using a wide array of maneuvers to outfox opponents, including feints, shimmies, shoulder drops, nutmegs and rapid changes of pace and direction, he’s shown what an extremely elusive proposition he is to handle.

Accompanying this with some crafty scanning over his shoulder and to either side, and this has given him a fine foundation to know where his opponents, teammates and the vacant spaces are before tailoring how best to receive the ball. So good at protecting the ball, spinning away from his man, using his first touch to gain separation or knowing when to receive in a forward facing posture, he’s gotten these details spot on to enhance his output.

Very press resistant, the nimble and beautifully balanced Odegaard’s dribbling has also been key when luring out opponents to press him, which has crucially generated a free man upfield. In addition, this has caused issues for the opposition’s defensive organisation, for someone has had to leave their post to mark him, thus weakening their structure.

Supplementing this with his incisive passing, which has enabled him to create many chances and orchestrate many positive moves, Odegaard’s been adept at unlocking defences and constructing passages. Capable of playing neat through balls in behind, clipped balls over the top, combining intricately in tight spaces and hitting penetrative vertical and diagonal line breaking passes, this has so far served as a key element of his armoury. 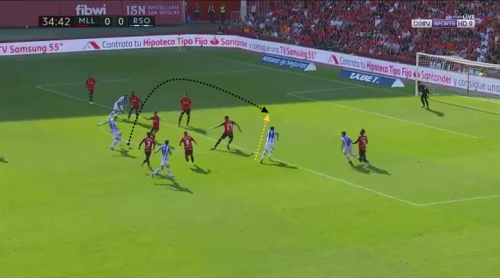 Lovely dinked ball over the top 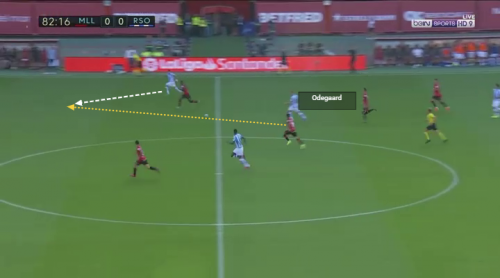 Classy through ball in behind 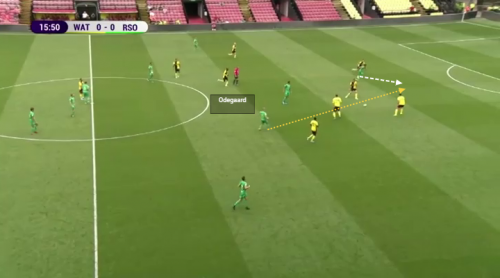 Sublime through ball in behind

Weighting his passes so they can be controlled comfortably on his intended recipient’s preferred foot, this has meant they are in a position to use the ball cleanly. An effective chance creator, who’s able to produce those moments of magic with his playmaking skills on the dribble and with his passing, he’s been a real difference maker in the final third.

Tying everything together with his clever movement, and Odegaard’s probing means he’s frequently supplied his colleagues with good options. Mixing things up shrewdly, his spatial understanding, allied with the freedom Alguacil affords him, has given him the platform to shine.

So quick to identify weaknesses in the opposition structure and where openings are present, he’s exploited them efficiently. Be it through slick runs in behind or into the channels, finding room in the 10 and half spaces or dropping deeper to aid build up, he’s always looked to find space to get on the ball. 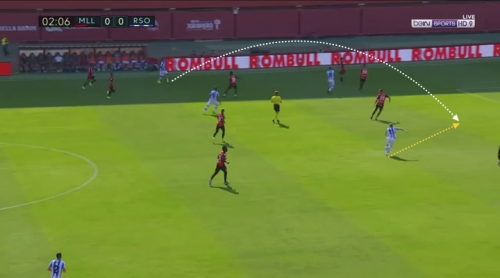 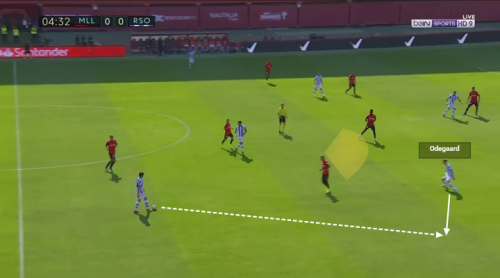 Odegaard smart movement as he moves out of opposition cover shadow

Excellent space finding between the lines in front of the defence

Quick to notice when the opposition fullback pushes wide onto his winger, the way he’s exploited the gaps that arise has been a real feature, with him dovetailing nicely with Adnan Januzaj in particular. Odegaard himself has been good at drawing and pinning markers himself so he can return the favour and help manufacture space for his teammates.

Already performing some nifty rotations, slick one-twos and opposite movements to further unbalance backlines, it’s been encouraging to see how nicely he’s working with his comrades. 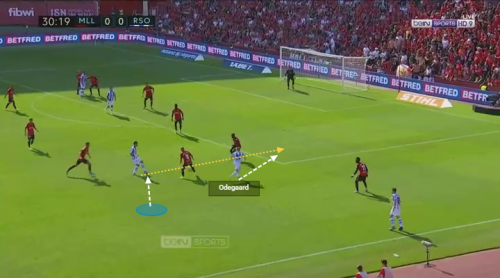 Neat one-two exchange to get in behind

Ultra fit and eager to succeed in the Spanish top flight, it’ll be fascinating to see if he can keep up his eye-catching form as the season wears on. If he can, he just may return to his parent club ready to make an impact and wholly vindicate their decision to sign him at 16 back in 2015.

But for the time being, persistently proving his worth and gaining crucial experience in one of the world’s finest leagues will be his sole focus.