Rodrygo’s magnificent performance in Real Madrid’s 6-0 Champions League demolition of Galatasaray, where he scored a hat trick and supplied an assist, served as a testament to what a tremendous talent he is and why Madrid were willing to part with €45 million to secure his services back in 2018.

One of the finest youngsters in world football, Rodrygo’s historic display demonstrated a maturity beyond his years, as he stepped up and proved himself on the big stage.

Seemingly unnerved by the occasion, the 18-year-old wreaked havoc against the Turkish giants, on a night where his movement, technique and dynamism ensured Galatasaray struggled to come to terms with him.

While he enjoyed stints on the left wing and centrally, he played predominantly on the right wing against Galatasaray, with his movement and partnerships he formed with his colleagues key to him shining.

To start with, he dovetailed nicely with his fullbacks (mostly Dani Carvajal), as he would hug the touchline or drift infield, which created room for the them to underlap or overlap as Rodrygo’s opposite number would track him hard. 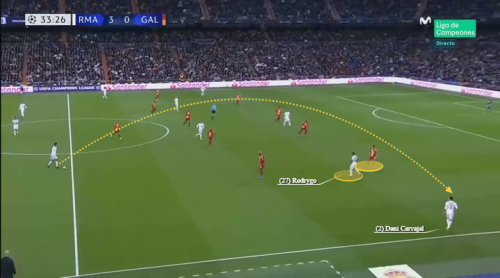 Rodrygo drawing his man to create space for Carvajal

It was also notable how he’d check deeper towards the ball carrier, which would provoke his man to follow him, thus manufacturing space for an onrushing midfielder or Karim Benzema to utilise.

Rodrygo dropping deep to create space for his teammate

The Brazilian’s complementary relationship with Benzema also extended to when they performed opposite movements to generate space for one another, as shown in the example below where Benzema pins two men with his run in behind while Rodrygo comes short to receive in plenty of space. 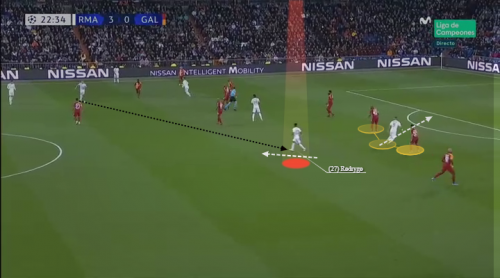 The timing and directing of his runs was a highlight throughout, for he did a fine job of picking gaps between defenders and exploiting the blindside of his markers to give his teammates a fantastic progressive option. 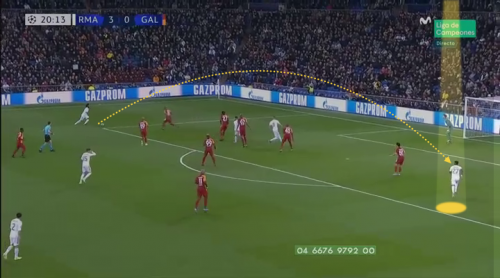 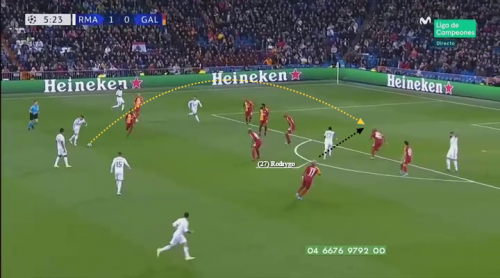 Rodrygo wickedly timed run in behind

Indeed, all of his goals illustrated how effective he was in this regard. The catalyst for his first was a shrewd blindside run, his second arose courtesy of crafty run into the box and his third from a slick run to get on the end of a one-two with Benzema. 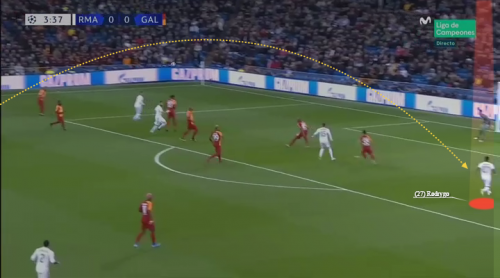 Rodrygo’s brilliant blindside run prior to his first goal 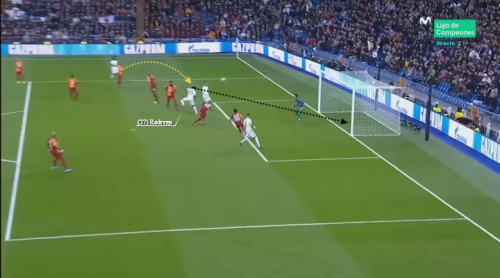 Rodrygo’s super leap, header and run for his second goal 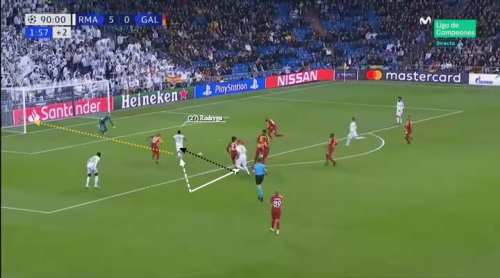 The way he accompanied the afore with his clinical finishing was a joy to watch, with all his goals demonstrating his confidence, composure and class in front of goal. Scoring a perfect triple, the way he took his chances with such conviction certainly bodes well moving forward.

The former Santos sensation also wreaked havoc with the ball at his feet with his crafty dribbling. Possessing brilliant close control and a top first touch, this formed the platform for him to get at his opponents. From here, the skillful attacker then used some neat shoulder drops, feints and rapid changes of pace and direction to either beat his man, gain separation to execute his actions or to provoke pressers to free up a colleague.

Breathing life into offensive moves with his dribbling and stretching the opposition horizontally and vertically with his electric movement, there was no doubting what a key man he was during Los Merengues’ rout of Fatih Terim’s men.

By the numbers, his six touches inside the box, four progressive runs, three shots, three dribbles and the fact he completed 48 of his 54 attempted passes punctuated his sterling output.

Still only 18 and a player who frighteningly still has so much room for improvement, the gifted Rodrygo unquestionably looks set for a future littered with success at the highest level if he can keep producing performances like this on a regular basis.