Possession adjusting. It’s been around for a couple of years now in football statistics, originally an attempt to help make sense of defensive stats for players; for example, this link from the always-good Statsbomb. 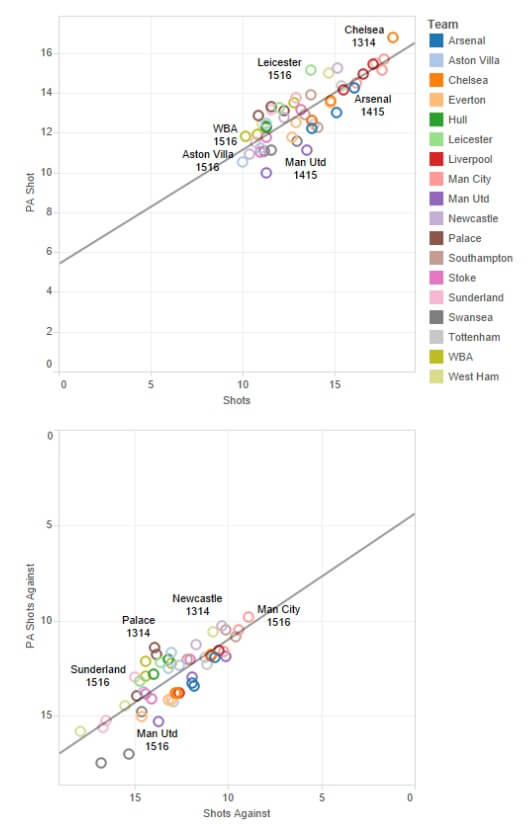 This is data from the last 3 seasons of the Premier League. The idea – or the theory – is that those above the line are more ‘efficient’ with possession, and those below the line less so.

On the left, this is in attack, when teams have the ball. You can see teams like Leicester 15/16 and Chelsea 13/14 hovering with clear space below them, while Manchester United (in all three seasons) hang below.

On the right, is how teams fare without the ball. The word ‘efficient’ doesn’t quite work in the same way here, but you get the idea. Crystal Palace (the darker brown circles) of 13/14 and 14/15 are both hovering in a nice area above that line, suggesting that they ended up conceding fewer shots than might be expected when taking into account the amount of possession they had. Manchester United 15/16, and Swansea (darker grey) in 13/14 and 15/16 are all some way below that line of best fit.

It should be noted very explicitly that this is a very quick and crude method of trying to glean deeper meaning from the stats. If one is wanting to know how ‘efficient’ a team is in creating shots, or preventing them, there will undoubtedly be a lot of better methods. For example, a team may have a high shot total but this may be a result of a very large amount of poor quality shooting opportunities.

Being above or below the line also doesn’t necessarily mean the team is ‘good’ or ‘bad’ – we can see that Manchester United 14/15 made marginally fewer possession adjusted shots per game than West Brom 15/16, but I know which team’s attack I would rather have.

When combining both the attack and defensive sides, the teams get far more spread out. 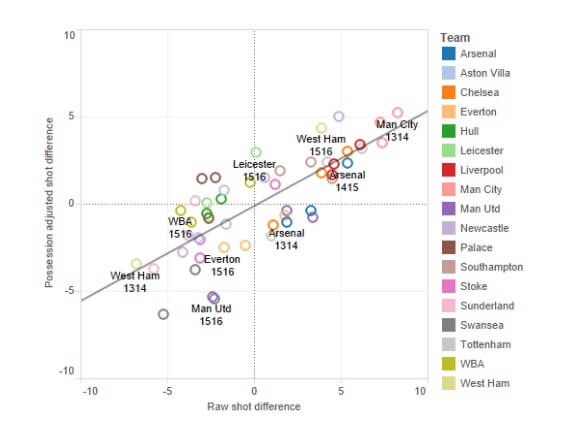 One notices that Manchester City have their three seasons clumped pretty close to the line of best fit, and with some of the most superiour shot differences using both non-adjusted and adjusted numbers. Leicester 15/16, almost dead on a zero shot difference, get propelled up to one of the better shot differentials in the sample.

It’s also interesting, in some cases, to see a team’s progression over the three seasons. I take, as an example, Everton. 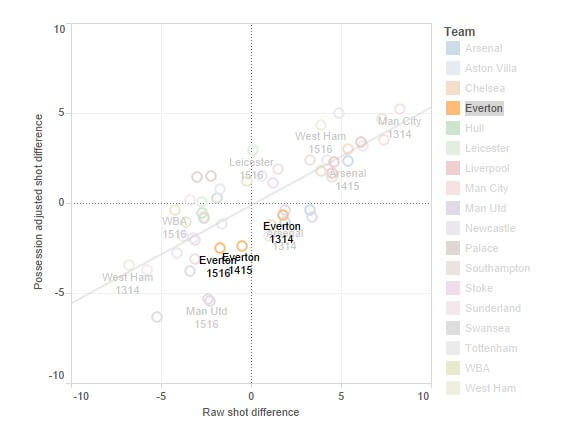 A backwards slide in shot differential terms, both in raw numbers and possession adjusted. It was probably right for Roberto to go.