Santi Cazorla’s sensational performance vs. Real Madrid on Thursday was unquestionably a night to remember for the little genius.

In what was a man of the match showing, the Spaniard bagged a brace to earn his side a draw over the star studded World and European Champions.
Having endured a wretched recovery that lasted two years and saw him endure 10 operations, it’s been fantastic to see him back playing with Villarreal this season, the team he made his professional debut with. Registering a pair of decisive strikes, his first was a scintillating, well placed finish following a brilliant forward run, where he opened up his body perfectly prior to striking home from the edge of the box. 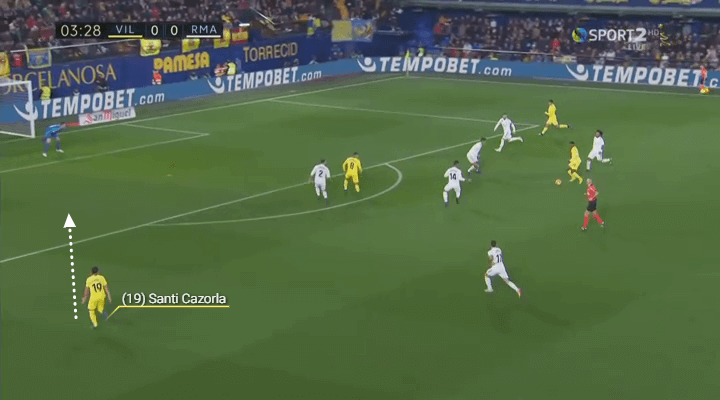 Santi Cazorla’s run prior to goal 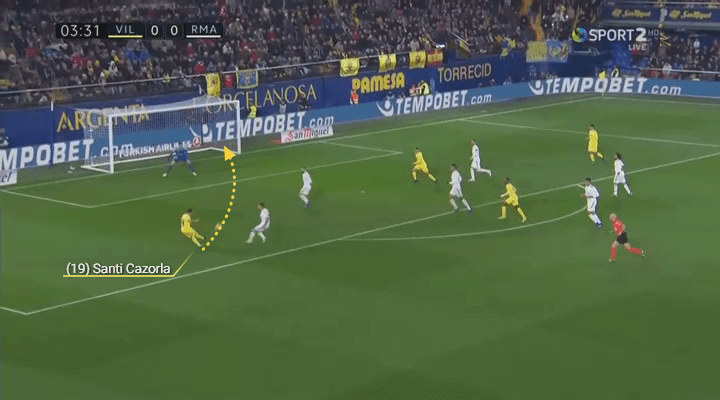 Then his second was a rare headed effort from the diminutive 168cm midfielder, which was actually his first aerial goal in La Liga and just the second of his career. Cazorla’s masterclass was much more than just his goals, however, for his intelligent movement, supreme distribution and ball handling were equally impressive.

Full of variation in his movement from his nominal left wing post, the former Arsenal whizz was clearly afforded much positional freedom by new manager, Luis Garcia. Whether hugging the touchline, venturing infield into the 10 or half spaces or dropping deep into midfield to support his team’s build-up, he was vital towards the Yellow Submarines’ possession phases. 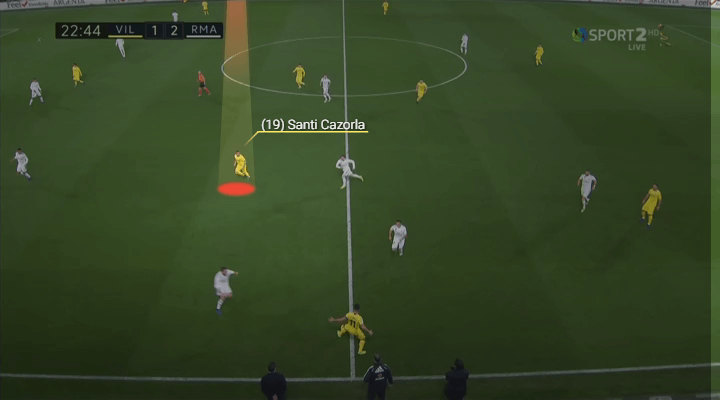 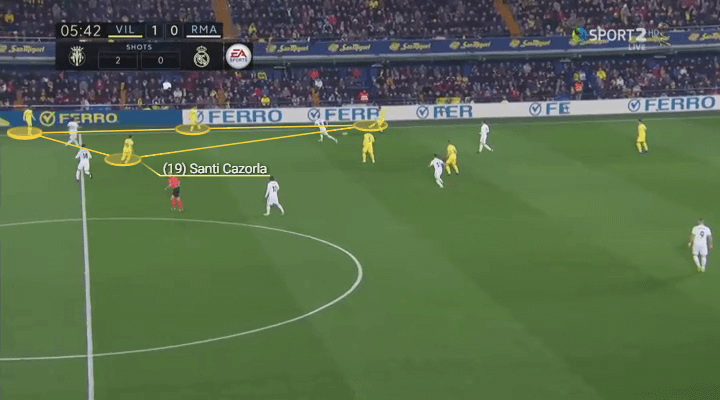 On top of finding spaces for himself to receive in, his positional nous notably generated space for others. A prime example of this arose when he straddled the touchline, which drew his man, Dani Carvajal, towards him and subsequently made a big disconnect between the nearby Real Madrid centre-back and Carvajal for runs to be made into. 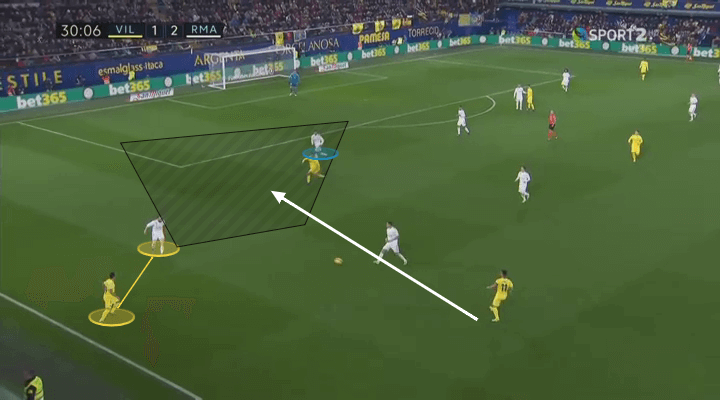 Causing constant dilemmas for Los Merengues’ defensive setup, he pinned his man, drew markers away from exploitable space and provoked pressing actions to manufacture a free man or open passing lanes. His spatial awareness allowed him to assist his team in producing vital overloads in wide and central areas to further enhance their offensive progressions too.

Once in possession, the 34-year-old was just as menacing, with his wicked first touch, razor-sharp ball control and wide array of feints, shoulder drops and 1v1 moves ensuring he excelled when placed under pressure. So aware of his surroundings and exemplary in his receiving body postures, he knew precisely when to spin away from danger, protect the ball play a fast pass or flick on, as he had the answers for whatever predicament he found himself in.

Meanwhile, when it came to his passing, his class shone through brightly. Hitting incisive, line breaking ground passes, pinpoint crossfield diagonals and combining beautifully in close quarters, the two-footed genius’ aptitude in this regard was a joy to behold.

The imaginative and ingenuitive Cazorla’s attacking quality was suitably demonstrated by his three shots, five key passes, two successful dribbles and obviously his pivotal double.
After the game Cazorla proclaimed this was his best display since coming back to Spain. New manager, Garcia, then spoke in glowing terms of his inspirational veteran, explaining: “Santi is a phenomenon, the first two games he did not play with me, but he is an example, I think he’s going to get more, he’s starting to find things better.

“He’s an example not only for what he’s done today. The good work of Santi Cazorla is a good example for players to see that the important thing is not individual work and that one player or another stands out more or less, what is important now is Villarreal.”

Seeing the hugely likeable magician back playing after his injury nightmare with that iconic smile on his face has undoubtedly been one of the highlights of the season. And his mesmerising efforts against one of the finest teams in Europe served as a testament to his tremendous ability while reminding us all of his formidable mentality and footballing quality.