Road to Winning the Premier League

Manchester City walked away as Premier League champions after the fall of rivals Man United in the hands of West Brom on Saturday. This is to add in Pep Guardiola’s achievements for the Citizens this year, having led the club into another win after the League Cup last February. Accruing 87 points from 33 matches, this triumph is the team’s fifth top-flight title on record.

Since the launch of the season, City has remained in intact form; smashing past Stoke City, Watford, and Tottenham while finishing at the top of their Champions League group in December. They’ve only lost twice in their title-winning campaign and garnered 2.82 goals per match and 234 shots on target. On the defense side, they’ve managed to intercept balls and block shots at staggering figures. 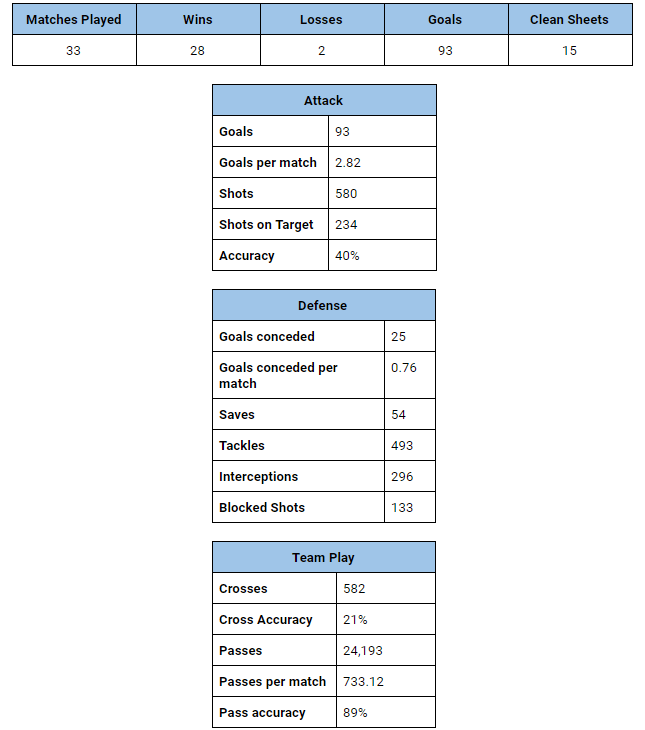 – New club record of 14 away League wins in a season.

– It’s the first time City has had three players shortlisted for the PFA Player of the Year with Kevin De Bruyne, Leroy Sane, and David Silva making the list.

City v Arsenal at 3-0 (March 1, 2018, Emirates Stadium)
Arsenal did not have the engine to stop juggernaut Man City and the latter took three goals of the highest caliber. These are courtesy of Sane’s mazy runs past four defenders to finish off with a curling shot into the top corner; swift passes among Sane, Silva, and Aguero, and the peak of the free-flowing technique where Kyle Walker crossed for Sane to make the net. Arsenal was clearly floored.

City v Stoke at 7-2 (October 14, 2017, Etihad Stadium)
The Potters knew they were in for an intense match but they likely had no idea just how fervent Guardiola’s side can be. City’s lynchpin scored a 30-yard strike and that was not even the top three goals for the match. The jaw-dropping goal from De Bruyne left Stoke manager applauding. De Bruyne was unstoppable, producing City’s second, fourth, and sixth goal with his passes. Towards the end of the clock, De Bruyne strode forward and delivered a low spread pass to Sane. The City’s first-rate midfielder is set to claim the first ever “Playmaker of the Year award” with 15 assists so far in the season.

City v Watford at 6-0 (September 16, 2017, Vicarage Road)
City tore through Watford’s defense in the blistering 10-minute assault on their opponent. They left quite an impression on the Hornets with some of the players weighing it as the best team performance they had faced against. City’s players showed true team spirit in this match with Aguero giving way to allow Raheem Sterling to earn the spot-kick. This group collaboration in every game is a key factor to why they will presumably continue to put on tremendous performances in the leagues that will come their way.

It’s all in a day’s work for Pep Guardiola who is no stranger to winning a Premier League title. The recent victory is Guardiola’s 50th English top-flight win, and it is quite special as it not only allowed the Catalan to prove naysayers wrong after his Manchester United debacle. It also speaks volumes of how the brilliance of Guardiola’s team is rooted at his having previously gone through the worst of his career.

Manchester City is not one to bask in the glory for too long. As early as now, City captain Vincent Kompany has challenged his teammates to clinch the title next season saying he has never been able to retain the title and he would like to see if his team can get even more successful. Kompany further praised Guardiola’s impact at City and his ability to improve individuals and unlock their full potential.

This season has been quite a ride for Manchester City. It’s surely worth to keep a close eye on this football club. Stay tuned for this team’s fixtures and take a shot at our Skype betting. Don’t have an account yet? Contact Eastbridge sports betting brokerage for details!