“Walcott’s GoalImpact hits again” came the tweet following Arsenal’s equalizer in the Community Shield. For those who don’t know, ‘Goalimpact measures the extent that a player contributes to the goal difference of a team’. It’s more technical than just a plus/minus, but that’s the essence of it (the players impact on the goal difference, impact on the goals, their goal-impact, if you will).

Amongst those aware of Goalimpact, Theo Walcott scores famously highly for a player who is often so dismissed in the minds of the English public, as someone who has failed to live up to potential talent. In a semi-recent blog post in December 2016, he appears at 15th in a list of the 50 players with the best Goalimpact ratings.

This article is not so much, or at all, to analyze whether Theo Walcott deserves this high Goalimpact rating, but to use it as a starting point to look at a particular game – the Community Shield. Did the tide turn towards Arsenal because of Walcott, or was his Goalimpact a happy beneficiary of something that could have happened anyway?

For what it is worth, I have been convinced by cleverer people than I that Walcott has been underrated by sections of the English audience (though this underrating is likely because he was overrated by other sections of the audience). He has some great positional sense and attacking instinct, but never really fit into any role he was given – traditional winger or central striker – until Arsenal played him in more of a free right-wing role where he could drift around and Bellerin would offer width on that wing.

As for the Community Shield, Walcott didn’t seem to move the needle in terms of shots. Arsenal led Chelsea 6-5 before he was substituted on and 5-2 afterward. However, if one looks at the ‘optimal shots’ (open play, non-headed, in the box; shots which are generally better quality chances than the alternatives) the gap narrowed once Walcott came on, not widened. Pre-Walcott, Arsenal led Chelsea 4-1 in optimal shots, and this shrunk to 2-1 in the time that Walcott was on the pitch.

Shots, of course, are not the be-all and end-all, and they’re fairly infrequent events to be counting anyway so if Walcott were to exert an influence on the game, it may not necessarily be reflected in the shots. Instead, it may show up in how successfully Arsenal progressed the ball, although with the basic stats available (on the WhoScored match dashboard) this is not a particularly easy task.

Areas in the final third are not equal in their value, the inside edges of the box being *the* area to assist from (think pull-backs and the added benefit of potentially winning a penalty), with the edge of the area a good area to either create shots or create chances to get into the box to then create shots. This kind of area is what I’m thinking of, for this not-wholly-scientific purpose, and for ease let’s call it the ‘Creation Box’. 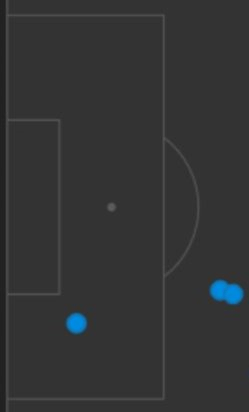 As a ‘best possible option available’ replacement for all ball progression in this area, I used the number of passes attempted (which ended in the final third) and the number of take-ons attempted. While Arsenal got a spike in these shortly after Walcott came on in the 67th minute, this wasn’t necessarily out of the norm for the pattern of the match. 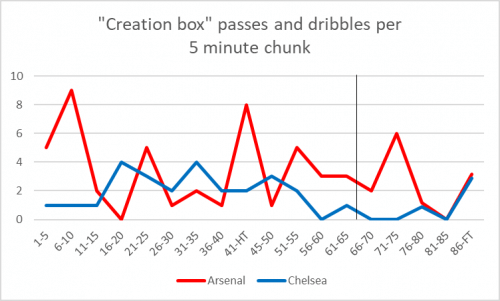 As a side note, this is an interesting way to view the match (I should also note that the values for 76-80 minutes and 86-FT have been adjusted slightly, in order to show both teams on the same value rather than the blue line of Chelsea completely consuming and overlapping the red line of Arsenal). It’s interesting to note that Arsenal didn’t make their man-advantage felt after Pedro was sent off in the 80th minute.

Conveniently for the sake of pub debates, there is evidence (the spike) to suggest a Walcottimpact, and evidence (the lack of spike before and after) to suggest that he made little difference over who he replaced. If you’re talking about a straight-swap, that would be Alex Iwobi, although Olivier Giroud came on for Alexandre Lacazette at the same time.