It is that time of the week again for our Football betting analysis. The time to look at the interesting things that Pep Guardiola is doing at Manchester City.

A lot was made of his inverted full-backs after the opening game against Sunderland – instead of bombing up and down the wing like we might expect, they drifted inside to help keep the ball, prevent counter-attacks, and generally confuse the hell out of the opposition. “I’ve literally got no idea what I should be doing” must be a regular thought in the defending oppositions of Guardiola’s sides.

In the game against Sunderland the invertedness (surprisingly, auto correct counts that as a word) of the full-backs was abundantly clear and can be seen quite easily in their touch maps. For these touch maps these lines will be used as a visual aid. 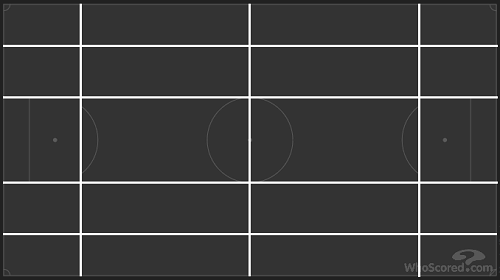 First, here are the touch maps of Sunderland’s full-backs, as a kind of reference point.

Van Aanholt’s are a bit more central, and attacking, but Love’s definitely look like a full-back having to defend, touches only central when they’re near his own box. Now, here are Clichy and Sagna’s touches from that opening day.

Both maps look like mountains, stretching up into the sky of central midfield. This only captures their movement when they touch the ball too, and remembering the game by eye (rather than by stat) almost everyone has noted that they were milling around centrally a lot more than the normal full-back would.

It was noted though that Kolarov in particular looked to take positions that were more like those of a regular full-back in the following game, against Stoke. His touch map looks even more restrained than Van Aanholt’s.

That’s around 75% of his touches in the wing area, compared to around 35% of Clichy’s touches at left-back against Sunderland in that wing area. It’s an extraordinary change from one game to the next, and presumably indicates that Guardiola is not just an ideologue, religiously wedded to rigid principles, but is more than able to adapt to what he sees before him.

At right-back, Zabaleta was more inverted, showing a fairly similar touch distribution as what Sagna had in the Sunderland game, both with around 54% of their touches in the wing area.

This time, both full-backs had around 64-65% of their touches in the wing area. It’s a little too early, after just three games (and none of the full-backs playing the full three) to look at whether their event statistics are different under Guardiola, but there are more touches per game so it seems more likely that significant patterns can emerge.

So Guardiola’s gone from two full-inverted, to one-inverted and one-non-inverted, to two possibly lightly inverted full-backs in the space of three games. Who knows what will come next.