FIFA World Cup 2018: Goalscoring heroes and playmakers to watch out for

Players to keep an eye on 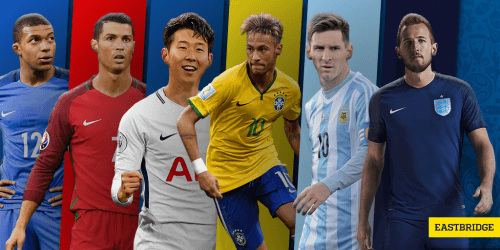 The World Cup is not only a masterful football showpiece. It’s also host to international sports drama. It has pitted the greatest nations against one another and we can only expect this year’s edition of the event to be even more climactic. The former winners’ circle will not permit middling and they come to terrorize in their respective group stages. Germany is just one win behind Brazil’s record haul of five wins. That’s enough motivation for the defending champions. Selecao, on the other hand, will hope their players get to avenge the heartbreak suffered from that traumatic 7-1 home soil loss to Germany. Uruguay is aiming for a third win while England, Spain, and France want to add another star above their crests.

The 32 participating teams have all sent their representatives and some of them are anticipated to scintillate in the global stage. The Russian summer awaits these players to dazzle and make their World Cup history. Be on the lookout for these guys.

Before joining Paris Saint Germain, Mbappe has brought the Ligue 1 title to Monaco. He’s considered as a field sensation in French football and is the world’s second most expensive player. This huge football talent is only 19 years old but everyone is expecting he’ll have an ace on his sleeve for the tournament.

Uruguay is counting on Luisito’s brilliance and all-important goal to power them through this year to the final stages.

He was the man in Brazil’s official World Cup qualifiers scoring 7 goals and providing 3 assists in 10 games. This rising star could be the deity who can save the national squad from a serious loss. (His surname is already a sign!)

Make no mistake. De Gea is the goalkeeper that will make you rise from your seats. His nearly impossible and triple saves are always unbelievably in time for the big moments.

This midfield architect was regarded as Germany’s best player in the 2014 World Cup. Bank on him to create and improvise goals for his team this time around.

Asia’s finest. Korean maestro Son Heung-Min has already cemented his status as one of the best players Asia has ever produced in the course of two seasons. The 2017 KFA Player of the Year awardee has also become the top Asian goal scorer in Premier League history and is being compared to his idol Park Ji-Sung. This is his 10th appearance for South Korea.

Net hitman Azmoun has a whopping 23 national side goals and has caught the attention of top European clubs. This June will be his first foray into playing among talents of international caliber. But the Iranian seems eager as he heads to Russia in top form.

Kagawa currently holds Japan’s football banner. He played a key role in the qualification rounds of the Samurai Blues and he might just propel his team farther into the World Cup stages.

England’s captain Harry Kane is a world-class striker with over 50 goals scored in 2017. He has become Europe’s top goal scorer, beating Lionel Messi and Cristiano Ronaldo. He could lead the English side to a win if he can unleash that same level of goalscoring finesse in the tournament.

The Spanish magician could light up the game for his country this year. He’s a technical leader, a team player, and he has proven to be too much for even the best defenders to handle.

Hwang plays for Austrian club RB Salzburg and was voted as Asian Young Player of the Year in 2017. His make-or-break showing in the qualifiers has wowed experts. This forward can cause major defense problems for opposing teams in Russia. (The dynamic duo of Son Heung-Min and Hee-Chan Hwang can get South Korea past the knockout stages).

Saudi Arabia has their own football star in the person of Al-Sahlawi. This Asian goal poacher has a sensational net record for club and country. How far the Arab nation can go in the playoffs partly depends on the striker’s performance.

The stats hails this Argentinian “La Joya” as the next Lionel Messi. Dybala has a long way to go, but if he can keep up his insane shooting technique, positioning, and pace, he can be the La Albiceleste’s much-needed new hero for this World Cup.

Werner led Germany to their Confederations Cup win with a return of three goals and earned the tournament’s Golden Boot award for it. He’s looking to get another one this year. And with his finishing skills, it’s not that far-fetched. Die Mannschaft’s main striker is all too capable of giving the winning goal in the finals.

Belgium is not to be neglected as long as King Kevin is in the field. Pep Guardiola’s “complete player” is every team’s dream playmaker. He’s a restless engine, dynamic in both attack and defense. He had an impressive season with Manchester City that saw him bag the first ever Premier League Playmaker of the Year award.

This talisman gave Egypt their long-awaited return to the World Cup. He has been included in the final squad despite a recent shoulder injury and this comes as no surprise to many. The striker has been scoring in nearly every game he has played in and his fascinating way of playing makes for exciting football, win or lose.

The No. 10 jersey has been worn by Pele, Kaka, and Ronaldinho among others. Now, Neymar gets to wear the number and he more than stands up to the challenge of stacking up to his predecessors. He has the skills, the confidence, and the natural gift to wreak havoc given half the chance. Everything points to Neymar bringing Brazil the world title.

Of course, the world is gonna tune in to what Ronaldo is gonna do for his World Cup participation. The Real Madrid star has guided Portugal to its first major title in Euro 2016 and expectations are high. This long-range shooter continues to break personal and league records despite advancing years. His speed and strength are guaranteed to be in exemplary display this World Cup.

Arguably “The G.O.A.T” (The Greatest of all Time) is described by the London Times as a creature made to play football. A bloodhound for the goal. We’re gonna watch closely what miracle Messi is gonna pull to claim the World Cup for Argentina. This could be his last international appearance and there is no way the Tango star is gonna let anyone easily steal his chance to win the only major achievement he is yet attain. If he will be able to repeat Maradona’s 1986 feat, he is bound for all-time glory (I mean, if he isn’t already).

Such powerful players are about to square off in a competition that’s for the ages. Don’t get left behind on the action. Sign up with Eastbridge broker betting and place bets on Skype today. Want to get World Cup bonus? Visit VOdds sports trading platform for details.