The Copa America 2016 is nearly upon us – the centenary of the competition, hence a Copa in 2016 after having one in 2015 too. It staggers the summer’s football nicely, starting a week before the European Championships on June 3rd (early on June 4th for Europeans).

In the back of most nations’ minds though, particularly ones who don’t have a chance of winning, is how their squad might lay foundations for future success. Is the squad one that’s going to blossom in 2, 4, or 6 years’ time, or is it a squad whose Copa America 2016 will be its last hurrah?

Overall in the tournament, the squad make-up is a pattern you would expect, with the bulk of players coming from ages usually identified as the ‘peak age’ range of 25-28. There’s more of a skew to the older than younger side of that in terms of who has been picked; understandably, given that these are likely to be players who have played a lot for their countries and may only have recently left the peak age range. 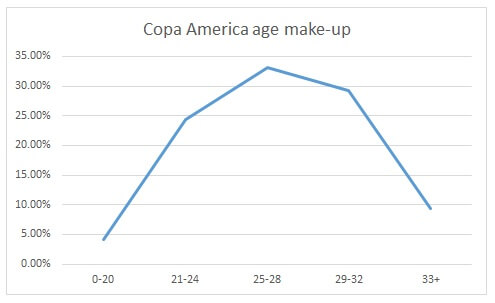 By position, goalkeepers are unsurprisingly the most skewed towards the elder ages, although the extent of the skew may be more than expected, with around 25% of goalkeepers picked aged 33 or older. Forwards are the most symmetrical, with a spike in the peak-age age group. Perhaps the most interesting are defenders (usually considered to peak later than the more advanced positions) where there are marginally more 21-24 year olds picked than 29-32, and the opposite for midfielders. 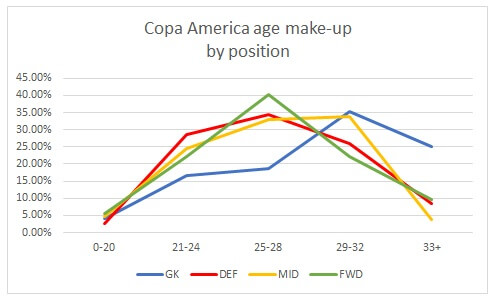 Individual squad make-ups get quite interesting. 21 of Argentina’s 23 players are in either the 25-28 category or the 29-32 (11 in the peak range, 10 in the 4 years after it), by far the heaviest concentration of any squad. By the time the next World Cup comes around, this squad will only have 5 players in the peak age range, and 15 aged 29-32. It looks, by the birth dates, like a squad in need of regeneration.

This is exactly what Brazil have done. 9 of their 23 are aged 21-24, with 6 in the peak age range. They, age-wise, are weakest at forward looking long-term, with a 29-year old (Hulk) and a 36-year old (Ricardo Oliveira), although this is without Neymar, who is due to play at the Olympics instead.

Elsewhere, where they have 29+ year olds, they have players around the age of 22 as well: Fabinho at right-back for Dani Alves; Douglas Santos at left-back for Felipe Luis; Ederson and Alisson in goal for Diego Alves. Quality is a matter all in itself, but they also have talented young players like Marquinhos, Coutinho, and Casemiro. It will be interesting to see whether this difference in squad ages of Argentina and Brazil begins to show over the next 2-6 years.

Outside of the big guns, Colombia have picked more players younger than peak age (24 or less, with 12) than peak age or above. Venezuela and Peru have picked the most 20-year olds and younger (3 each), with both nations also picking 8 players aged 21-24. Uruguay are the opposite, with 15 players aged 29 or older. They can’t even use the Olympics as an excuse for an absence of youth, as they didn’t qualify.

Finally, just to give the Americans a mention, the teams who are taking the most 33-and-older players to the Copa? The United States, and Panama.