Scoring a goal is one of the hardest things to do in football, and one of the things coaches think most about how to do (for obvious reasons).

Football has known, since the days of Charles Reep back in the mid-twentieth century, that goals often come after sequences of only a few passes. This is more due to the effect that quick movement can have, rather than an astounding efficacy of route one football.

It’s interesting to look at the build-up of goals and see just how clearly this bears out in real life. Using FourFourTwo’s StatsZone app, one can see just how short the immediate build-up to a goal is.

Of the 20 open play, non-own goal goals in the Premier League’s first gameweek, 9 of them involved either one or zero passes in the StatsZone defined build-up, and another had just two.

At the other end of the scale, Liverpool strung 19 passes together before their third goal (and the 13 before their second was the second longest build-up on the list).

However, if we look at both of these lengthy build-ups we can identify something of a pattern. 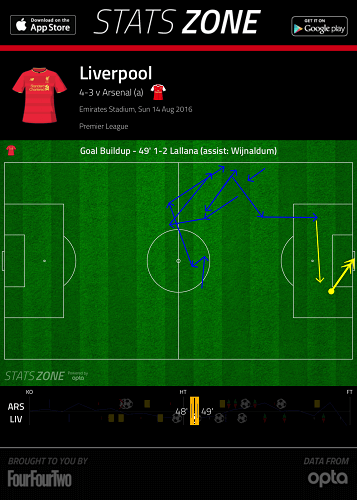 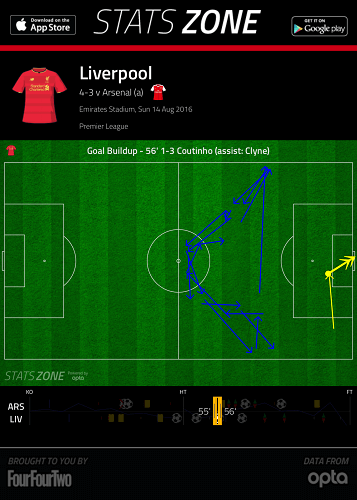 For both, the bulk of the passes are outside of the final third (or probably more accurately the final quarter of the pitch), and many of them not even particularly close to the opponent’s goal.

Both then involve a single move (in one a pass, in one a dribble) into the final third, a single pass, and then the goal. In some ways then, even though these goals were preceded by a long string of passes, they follow the ‘few passes’ trend.

The third longest string of passes, 11 by Watford, is somewhat similar. 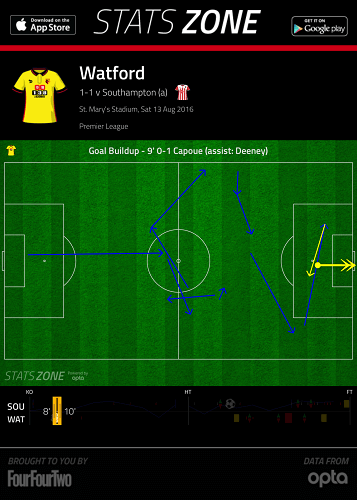 What is probably unusual about these goals is not that they were phenomenal team efforts, but rather simply that a goal came directly after a spell of possession.

For Coutinho’s second goal, the 19-pass move, if Clyne had been tackled as he dribbled down the right but picked up the loose ball, that would have broken the possession chain. Suddenly, a ‘brilliant team goal’ is reduced to a simple pinpoint driven cross.

There is an obvious reason for there being only a handful of passes in the final third being involved in the build-ups to goals, and that’s that there are fewer final third passes.

It’s hard to pass the ball into that area due to the increased amount of bodies there, and even more difficult to complete a good pass, where the recipient has the opportunity to do something meaningful with the ball.

But this leads me to a larger question of how one might be able to tell when a team enters a new ‘phase’ of possession. Does movement into certain zones of the pitch indicate a newly focussed intent to attack, and therefore a new phase in their possession? Would speed be a better indicator, although the two are likely to be linked.

This type of investigation could be useful for understanding how the game works, but also for coaches planning their systems for upcoming matches. Who are the players in the opposition teams who, statistically, initiate ‘attacking’ phases of play most often, and which are the most successful at it? Where are these phases initiated from? If a team has had possession for a long time, is there a certain point at which they often try and spring an attack?

These questions, though, would require much more analysis of a much larger sample of data, but it shows the kind of ideas that can come just from looking at a few charts.

Menu
© Eastbridge 2021
We use cookies on our website to give you the most relevant experience by remembering your preferences and repeat visits. By clicking “Accept”, you consent to the use of ALL the cookies.
Cookie settingsACCEPT
Manage consent