Joaquin Correa’s followed on from his positive first season at Lazio, where he played 44 times in all competitions on his way to notching nine goals and six assists, as he’s now firmly established himself as one of the stars of Serie A.

Already on seven goals and four assists from his 21 games, Correa’s been instrumental towards Lazio’s amazing start to the season, that sees them sit third in the league having not lost in 12 matches and won the Italian Super Cup over Juventus in style.

Growing with every passing week, Inzgahi certainly deserves credit for how masterfully he’s managing his team and getting the best out of them, with Correa unquestionably being a key beneficiary.

Technically gifted and elite with the ball at his feet, he’s used his quality here in a multitude of ways to hurt opponents. His wizardry on the dribble is a great place to start, as he possesses a tidy repertoire of skills, including stepovers, shoulder drops, feints and nifty changes of pace and direction, to either beat his man, win fouls in dangerous areas or buy time as he assesses his options. Accompany the afore with his superb ball control, first touch and electric acceleration, and it’s easy to understand what a weapon he is, both in confined areas and when carrying the ball forward on the counter, where time and space are aplenty.

As his assist tally shows, Correa’s a very useful passer too. Quick to identify a colleague’s run and to oblige it with a neat through ball, this is another important string to his bow. Moreover, his one touch combination play in and around the box, slick cutbacks from wider areas, neat array of flicks and layoffs and ability to break the lines from deeper areas offer further upside.

His finishing also deserves mention, with him demonstrating a good level of accuracy on both feet, as he’s struck some clinical 1v1 finishes, shown how he can round the keeper coolly, hit some powerful blasts to beat the keeper and shown his striking instincts with some quality close range and short back lift efforts.

Tying everything together with his astute movement, this compartment of his game elevates his game to another level. Boasting a brilliant, complementary relationship with his fellow attackers, Correa and co dovetail superbly to create space for one another by manipulating their adversaries incisively. They predominantly do so with some wicked rotations and opposite movements, plus by positioning themselves on different heights when receiving in the final third and when crosses are fired into the box, as Inzaghi’s tactics to create confusion for opposing marking schemes bears fruit relentlessly. 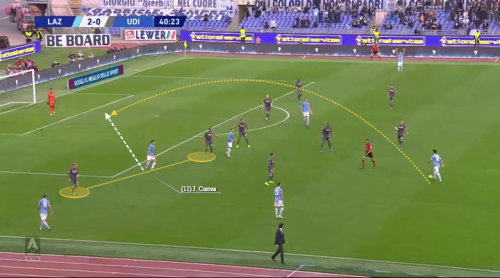 On an individual level, Correa’s movement has been a tremendous weapon for Lazio. Timing, curving and directing his runs sharply in behind, down the channels and into the box, he reads when the ball holder has their head up and begins his runs accordingly. 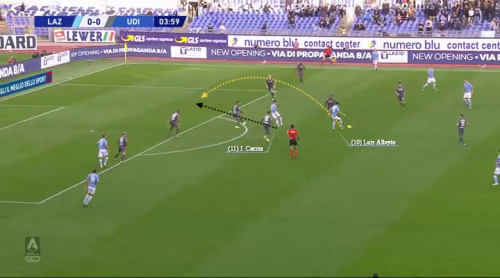 A master at exploiting the channels and taking advantage of gaps between defenders and when a teammate draws markers to generate room, he targets these gaps expertly to place himself in promising attacking locations. 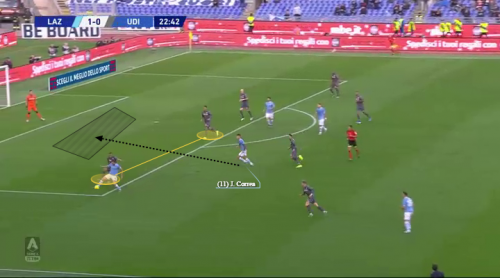 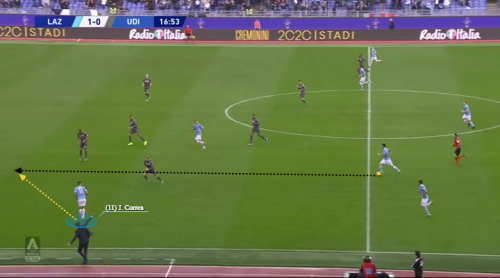 Correa’s well timed out to in run in behind 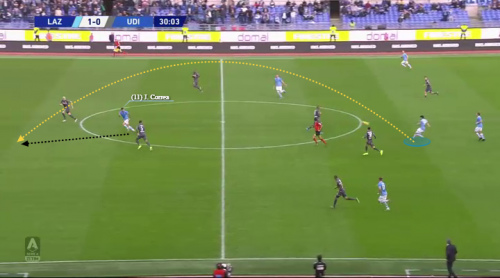 Correa’s wonderful depth run to get in behind 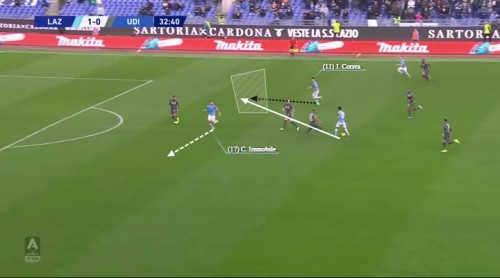 Immobile making room for Correa’s run in behind

Correa’s quick to repay the favour, for he constantly pins and draws markers out of shape to free up space for colleagues in the final third.

The way he works with Immobile especially has been intriguing to watch, for whenever one drops deep, one will usually always stay high and maintain depth and act as an advanced target. This consequently stops the opposition backline from stepping up, with this frequently generating room between the lines for a colleague to utilise to impact proceedings. 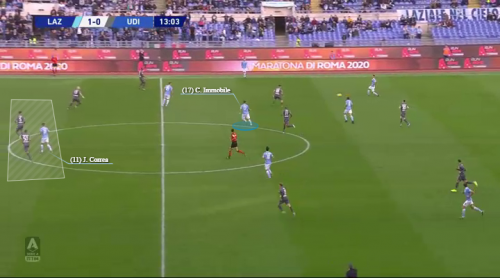 The way Correa smartly drops deep into midfield to help the Eagles progress upfield has been another positive, for he times his checks towards the ball in order to achieve ideal 4v3, 4v2 or 3v2 overloads. 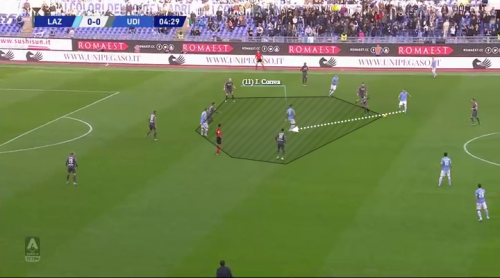 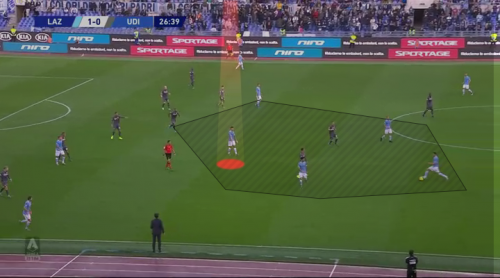 Correa’s good positioning to find space while generating a 4v2 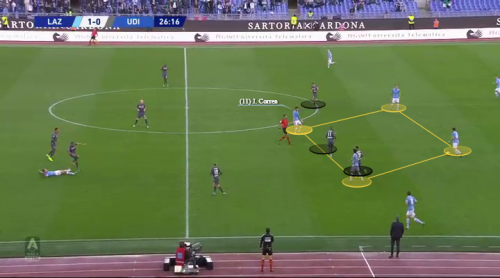 Another thing that warrants praise is his head scanning, which gives him an updated mental imagery of his surroundings so he knows whether he can turn while receiving, protect the ball or play a quick pass. In addition, it lets him know where teammates, opponents and vacant spaces are located nearby to enhance the quality of his actions. 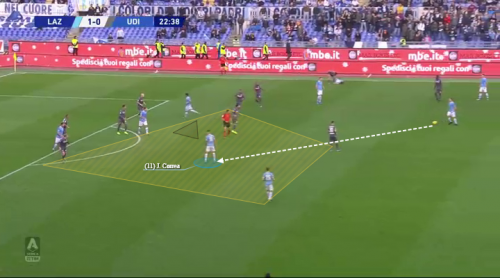 Elusive, hard to read and a massive menace on the offensive end, Correa’s remarkable form has helped propel Lazio to Serie A title challengers, which is something his numbers back up. Ranking fourth in the league for Expected Goals and assists on 10.52, fifth for XG on 8.51, 15th for attempted dribbles on 89, sixth for touches inside the box on 81, fourth for deep completions with 37, joint 22nd for progressive runs and equal 22nd for key passes on nine, his stats demonstrate his class.

About to enter his prime and playing some of the best football of his career, Lazio have smartly extended the 25-year-old’s contract, for he’s justifiably attracting the interest of many elite teams across Europe.

Looking right at home in Rome in his second season at Lazio, Correa would be wise to stay in an environment where he’s thriving and forged such marvellous relationships with his teammates. Having already won a Coppa Italia and an Italian Super Cup with the Eagles, there’s a strong chance more silverware could follow if he remains at this magnificently drilled, ultra competitive Lazio outfit.