The wild swings of Swansea under successive managers

The bottom of the Premier League is strange. Swansea, in particular, are strange, and not just because they changed their manager twice in half a season. Their regular midtable finishes, and particularly strong 56-point 8го place in 2014/15, significantly colour our perception of what they are and where they should be.

As has been noted in various places, they’ve had a poor couple of years on the transfer front. In attack, Wilfried Bony was not adequately replaced by Bafetimbi Gomis, and then Gomis was replaced by a good but ageing Fernando Llorente and never-used Borja Baston. Chico Flores was not adequately replaced by Federico Fernandez, and Ashley Williams was barely replaced at all, promoting long-time (for a reason) back-up Jordi Amat to a first-choice centre-back spot. Meanwhile, in midfield, the spectre of long-gone Joe Allen as a force to balance, and therefore hopefully bring the best out of, Sigurdsson and/or Ki also looms large.

Added to, or probably contributing to, the manager troubles, Swansea also have the worst conversion rate difference in the entire league. Long-time sufferers Southampton and West Ham have each gone on result-runs which have pushed them up towards normal levels on this front, to differing extents, but Swansea are still on -5.41 percentage points.

This is essentially by virtue of the defensive side. In attack, they’ve converted at league average levels of 10.5%, but have been conceding at a rate of 16%.

And that second figure is all Bob Bradley’s fault.

But wait, Americans, hear me out. Both of Swansea’s sacked managers this season had one side of the ball on which shots were converted at an acceptable rate, the other with a conversion rate to the detriment of Swansea.

There were a lot more goals under Bradley (4 versus 2.5 under Guidolin), but the goal tally went up for both sides, rather than balancing in Swansea’s favour.

What’s odd is that, on the face of it, Bradley really shouldn’t have suffered that huge conversion rate increase that Swansea’s opponents saw in his tenure. Swansea’s own improving conversion can, on the face of it, be put down to a slight increase in shots on target (3.86 to 4.36, and a big increase in proportion of all shots from 32% to 40%). However, the oppositions’ shots on target per game stayed virtually exactly the same (5.14 vs 5.18).

However, the location of these shots on target changed a fair deal between managers. 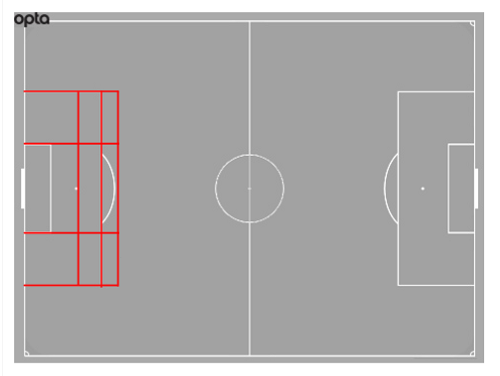 Using Paul Riley’s shot maps and their location definitions, we can look at how many shots are where. Under Guidolin, just over a single shot on target per game for Swansea came from the close central area – the width of the six-yard box, stretching out to the penalty spot. Under Bradley, this almost doubled to 2. This probably was not a perfectly desirable amount, but it was a lot better.

However, on the defensive side, Guidolin was only conceding around 1.7 shots on target per game from this area, which went up to just under 2.3 under Bradley.

Shots on target being concentrated closer to goal seemed to be a feature of Swansea life under Bradley. In matches where Guidolin was manager, around 30% of all shots on target (for Swansea and then for their opponents) were in this area; during Bradley’s reign this was around 45%.

Yet these increases still can’t fully explain the increasing rate that Bradley’s Swansea conceded goals compared to his predecessor.

It’s all highly bizarre. On the surface, looking at the conversion rates (and I’m painfully aware at the amount of times you must have read those words in this article so far), it would look like Bradley, in trying to fix his side’s attack, had opened a highway for opponents to waltz down the middle of them. They conceded nearly 1 of every 5 shots they faced!

But if that was the case, you’d expect the difference in volume on the defensive side to be radically higher than it actually is.

However – one final however – perhaps it’s the conversion rate of these shots on target which offers the key.

Guidolin’s side scored their shots on target in this close central area at a rate of 37.5%, conceded them at a rate of 66.67%. This probably shows the disparity in quality between the chances they were making and letting their opponents make too.

Under Bradley – unsurprisingly given what we’ve already seen – these rates went up on both sides of the ball. The increase for Swansea was noticeable and healthily so, but not ground-breaking, going up eight percentage points to 45.45%.

In defence, the oppositions’ rate goes up much more substantially, by almost 20 percentage points, from Guidolin’s 66.67% to an absolutely gut-punchingly huge 84%. That’s four goals for every save in that area.

And this is why Swansea are weird. The two managers seem to have offered two sides of the coin – Guidolin giving a starvingly poor attack and an average-to-bad defence. Bradley came in and improved the attack – both in volume and conversion rate on multiple levels, a probable indicator of better quality chances – but messed with the defence.

The volume where it matters was worse, but only marginally, but when they did concede shots where it mattered, it seems Bradley’s Swansea handed goals to opponents on a plate.

Hopefully, for Swans fans, Paul Clement will combine the right parts of both of his predecessors’ sides. After only two games – and those two being against Arsenal and Liverpool – we can only wait and see what will happen.