You want goals? Here’s where to see them – by @stufferonald

We all know that the best part of football is seeing a goal fly in, but the harsh truth of football is that they seem to happen all too infrequently. It is what sets the sport apart from all other sports, the fact that you could watch an entire game and not actually see one makes it more special. Anderson and Sally found in The Numbers Game that for team sports football had the fewest scores per game than any other sport by a long way. With sports like American football seeing a score every 9 mins, Rugby every 12.5 mins and Hockey every 22 mins. Football on the other hand sees a score every 69 mins. The best example of how much effort a score in football is worth compared to other sports is as follows. In the Champions League final between Inter Milan and Bayern it took 1421 events to occur before a goal was scored on average (Anderson & Sally, 2013, p. 71-72).

The question is then where is the best place to see goals? Having looked at the top 6 European leagues (Bundesliga, Serie A, Eredivise, BPL, BBVA and Ligue 1) we may have some answers for you. Most of the leagues have played around 8 game weeks now, so it seems a good time to look at where you can get the most value for your time spent watching. 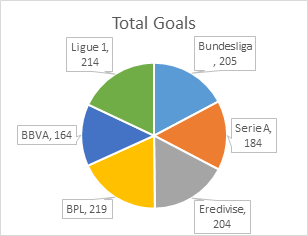 In terms of total goals the Premier League is ahead by 5 goals with Ligue 1 just behind (Ligue 1 has however had one more game week). Despite the stars that hail from the Spanish league they are trailing their closest competition (the ‘conservative’ Italian league) by some 20 goals! Despite the Dutch national side failing to qualify for the European Championships, the national league is looking healthy in terms of goal production only 1 goal behind their noisy neighbours the Germans (205). Assuming most people reading this will be avid Match of the Day viewers, so which county would make the best Match of the Day? The answer is the original, the premier League currently averages 27.38 goals per game week. This is the point at which we leave the French eating our dust in terms of goals production as they score a mere 23.78 goals per game week (Still outscoring the Spanish superstars (23.43). The Italians finish a relatively close second with an impressive 26.29 goals per games week. The Germans can’t help but be just ahead of the Dutch gain with 25.63 and 25.50 goals per game week respectively.

If your a knowledge of the European leagues goes beyond the Champions League you will be aware that they all have differing numbers of teams in them (Bundesliga 18, Serie A 20, Eredivise 18, BPL 20, BBVA 20, Ligue 1 20). Therefore the Premier Leagues 219 goals is spread out over 20 teams whereas the Bundesliga’s 205 is spread out between 18 teams. So in the Premier League on average a team will have scored 10.95 goals by this point in the season, where as a Bundesliga team will have scored 11.39 goals. As you’ve probably guessed by now the Eredivise is just behind the Bundesliga on 11.33 goals. Ligue 1 comes in at 4 with 10.7 and the Serie A and BBVA bring up the rear with 9.2 and 8.2.

So to finish, if you want to see goals England, Holland and Germany are the places to see them. However football isn’t played with numbers, so beware the sleeping giants in Spain.

Anderson, C. & Sally, D. (2013). The Numbers Game: Why Everything You Know About Football is Wrong. Edition. Viking.