Why Harry Kane should win the Premier League Golden Boot

The race for the Premier League title is not the only one being contested by Leicester City and Tottenham Hotspur – the (slightly less coveted) Premier League Golden Boot is as well. With just a medium-sized handful of games left still to play, the current top 5 looks like this:

After an extraordinarily strong start to the season for Vardy (and Mahrez), Kane is now in the lead – and will probably stay there.

Over the course of the season, Kane’s shot numbers – a decent if basic way of looking at the quality of positions he’s getting in – have been good, whereas those of the others have not quite been the same. 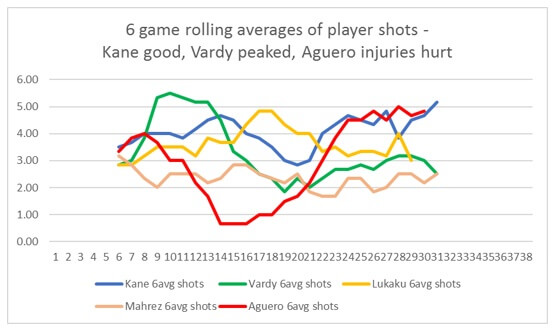 Kane’s closest competitor, Vardy (green) had a fantastic spike in shot numbers early on in the season, but his 6 game rolling average has actually been a little mediocre since about December. Kane’s meanwhile has been consistently pretty- to very-good, barring a mid-season dip, and recently seems to have hit a vein of good form. As far as these two go, it seems unlikely that Vardy will be able to outscore Kane between now and the end of the season.

Mahrez, for his part in the narrative, has been pretty good but not great, in terms of a goalscorer’s shot output, though this is probably because he hasn’t been utilised as a main goalscorer. His (as well as a couple of others’, who we’ll discuss later) tally has also been boosted by penalties – 4 of them versus just 1 for Aguero, so maybe Mahrez should be dropped from contention altogether.

Aguero’s line has probably also drawn your attention, the huge dip in the middle coming through injury. Good health is vital to a topscoring season, and Aguero has missed 6 games through injury as well as presumably being below par for several others, while the other four haven’t missed a single one (according to injury data on transfermarkt).

We can see that, this injury-hit dip aside, Aguero’s rolling average has been almost the same as Kane’s, so perhaps the Argentinian would have been much higher up the list if he’d had a healthy year.

Lastly, Lukaku. He hit a vein of form around the time that Kane was dipping (in these stats at least) in mid-season, but for the rest of the year he’s been consistently a little below the Englishman. He’s pretty close though, and (like Aguero) only one of his Premier League goals this season has come from the penalty spot. 5 of Kane’s 21 have been penalties.

Were penalties to balance out, that could be the difference, Lukaku already being ahead of Kane in non-penalty goals this season, 17 vs 16. Another potentially key factor is the fact that Everton have two more games than Spurs still to play this season, leaving Lukaku with a nice 180 minutes extra in which to add to his total.

However, he’s on an Everton side that hasn’t been having the best of times, whereas Kane is on a far superior Spurs side which will be doing everything to win the title (I’m talking about the league title this time, not the Golden Boot). This could also have an effect on the penalty count too, with teams spending more time in the opponent’s area probably more likely to win spot-kicks.

With the added games that Lukaku has, the race between him and Kane is probably quite close, although making up a 3 goal difference will be tough. For his shot numbers though, I would venture that Kane will be the one to win the Golden Boot, even if his team falls short in the race for the league.