5 most underrated strikers this season 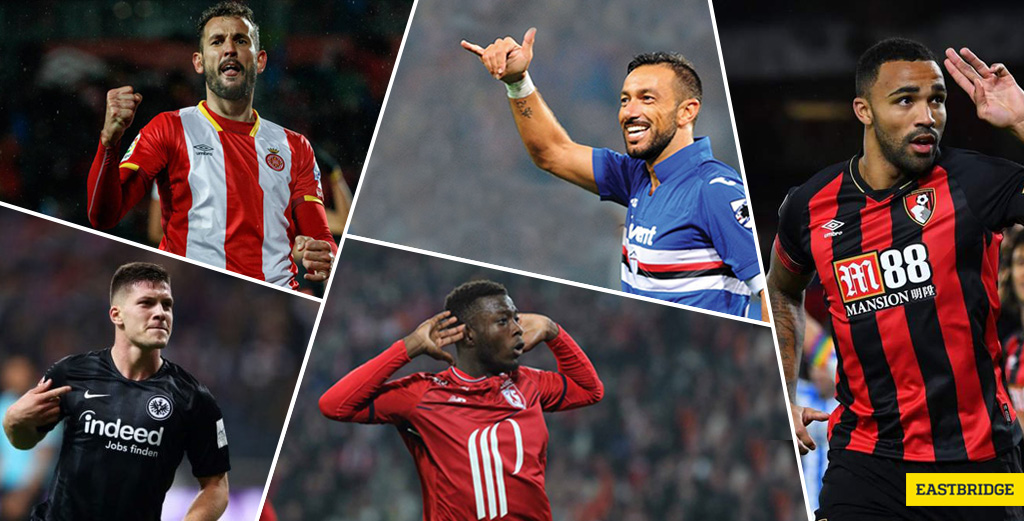 European football has definitely modified itself in the modern times, particularly in the transfer market. Each club, especially those from the elite class, is always willing to spend millions and billions on top-notch goal-scorers to secure their skills and play for their teams.

With the biggest names in the industry like Cristiano Ronaldo, Lionel Messi, Neymar, Harry, Mo Salah, etc., taking over the world of football, a lot of brilliant talents in several European leagues often go unnoticed. The growing competition in European football makes elite clubs pursue only the popularly-known forwards. However, there are plenty more strikers who are able to deliver stunning performances for lesser-known clubs.

Here are some of the best underrated strikers in the world for this season.

This Uruguayan national definitely blossomed ever since he joined La Liga side Girona. Last season, he was able to score 21 goals in 33 La Liga fixtures including a brace that earned a draw against Atletico Madrid, a make or break equaliser in their victory against Real Madrid, and another two goals in their return fixture again at the Bernabeu.

This season, Stuani is definitely playing on a completely different level. Aside from the fact that he managed to outscore Barcelona star Lionel Messi in the Spanish top flight, his ruthless efficiency is what makes him stand out. Ever since his arrival in Girona, he has been the main man the team looks up to when goals are needed.

Cristhian Stuani is currently the third top scorer in the La Liga, just behind Lionel Messi and Luis Suarez.

Despite his age, this 35-year-old Italian forward is showing no signs of stopping. Quagliarella has been quite a consistent performer for Sampdoria from his previous two seasons with the club. He even managed to surpass Dries Mertens, Edin Dzeko, and Gonzalo Higuain in the league for having the most goals scored.

This centre-forward is currently placed in the second spot in the Serie A top scorers, hovering just behind Juventus’ Cristiano Ronaldo who recently transferred to the Italian club from La Liga side Real Madrid. With his consistency and his astounding record in the league, he is certainly one of the most underrated strikers in the world of European football.

This French-born Ivorian forward is probably one of the most deadly forwards in the world.  Since making the move to the French top flight, Pepe has captivated the Great Danes with his inexhaustible form and performances.

So far this season, he was able to notch up at least 13 goals and 9 assists in 21 of his appearances. He was also recently linked with Premier League side Arsenal. With his goal-scoring prowess, expect this man to be one of the superstars in European football in the future.

Nicolas Pepe is currently the third highest scorer in the Ligue 1, ahead of Neymar and just behind Edinson Cavani and Kylian Mbappe.

This 26-year-old striker has been performing well ever since the start of the 2018-19 season. He has already managed to set up 15 goals in 20 Premier League appearances he has made so far, which made him the standout player for Bournemouth this campaign.

The English striker has been involved in almost half the goals Bournemouth were able to score so far this season. He is currently the seventh highest goal-scorer in the English top flight, even surpassing Roberto Firmino and Sadio Mane.

With his remarkable goal-scoring performances lately, he has attracted the attention of several Premier League clubs including West Ham United, and top-ranked team Chelsea.

At just a young age, he’s already a multiple record-breaker. This 21-year-old became the youngest player to score give goals in just one Bundesliga fixture. Dubbed as a sharpshooter, he has been making history in the Bundesliga as the top-scorer in the league, even beating Robert Lewandowski and Marco Reus.

He ended 2018 on a high, leading the goal-scoring charts in the Bundesliga along with Paco Alcacer.

With his excellent performances not only in the domestic league, but in European football as well, elite European clubs would definitely come calling for Luka Jovic in the next transfer window.

Support the teams of your favourite underdogs by signing up with our partner VOdds to bet on your chosen teams’ latest fixture! You will definitely come out as winners since VOdds provides the highest odds and prices in the market as well as exclusive deals and offers.