Despite Torino enduring a challenging start to the season, which sees them currently occupying 11th place on the table having only won one of their last eight matches, the form of central defender Lyanco has certainly been a positive.

A very talented young defender, Lyanco’s produced a series of excellent displays at the back in spite of his team’s struggles. Coming on in leaps and bounds this term, the Brazilian’s been one of the most promising young defenders in Serie A, as he’s clearly taken on board Walter Mazzarri’s teachings.

Blending physicality and smarts in his defending, the Brazil U23 captain’s overcome his injury and form issues from the beginning of the season to grow into a key piece of Il Toro’s puzzle, with him starting six of their last 10 league matches.

Standing 187 cm tall and boasting hulking strength, Lyanco’s certainly a formidable, imposing figure to face off against. Whenever an opponent ventures into his designated area of operation, he approaches his duties wholeheartedly, looking to apply pressure and get touchtight, so he can limit the effectiveness of their actions. 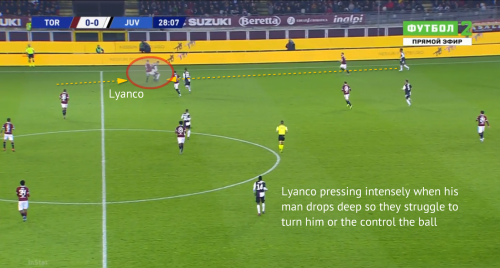 Harrying and jockeying foes well, this often forces his opponents into mistakes or sees him use his long legs to nip in and win back possession, as he’s a tough customer to hold off. Couple this with his reading of the play, which sees him react quickly to pressing triggers, and it’s easy to understand why he makes life uncomfortable for his foes.

His anticipation and awareness also holds him in good stead to track runners in behind. A frequent scanner of his surrounds, so he can gain an updated mental imagery of where his teammates and opponents are situated, this, in combination with his ability to predict what will happen next, ensures he’s alert to depth movement. 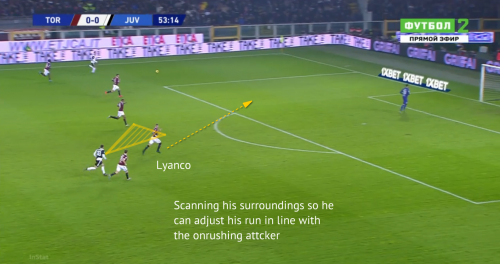 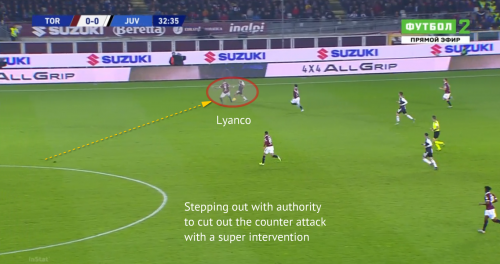 Lyanco stepping out with authority

Exercising sound judgement and clarity in his decisions for the most part, he’s also done a good job of taking on the reigns of blown markings assignments from midfield, pushing across to track runs into the channels, dropping back to cover for a colleague and known when to crossover a marking assignment with a colleague. Despite his size, Lyanco’s pace is decent too, thus seeing him cover the turf pretty well to keep up with his markers. 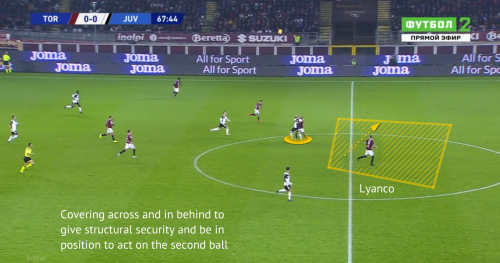 Lyanco covering in behind and across smartly 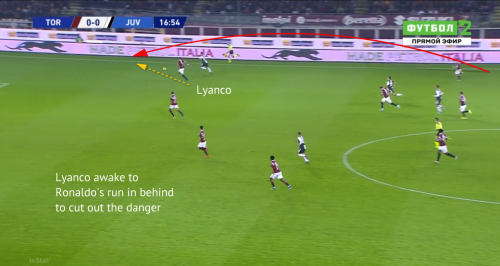 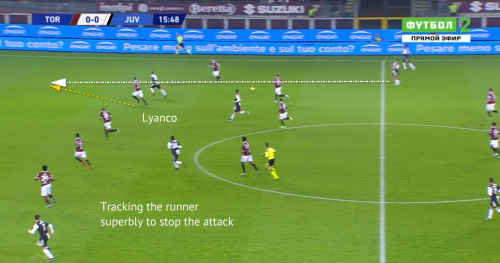 Adept at picking up the ball’s flight, his aerial prowess has been another highlight, for he rises up strongly to deal with crosses, set pieces (on both ends) and following goal kicks to help clear the danger to help his team’s chances of winning the second ball.

Although he initially failed to convince the Granata supporters after much was expected of him following his positive loan spell under Sinisa Mihajlovic at Bologna last term, it’s been encouraging to see him gaining some traction.

Having recently starred in Torino’s narrow derby loss to Juventus, where he did a tremendous job marking Cristiano Ronaldo and Paulo Dybala, Lyanco will have gained much confidence from his dazzling body of work.

Now the challenge will be keeping up his level, as he looks set to be a key component in Torino’s quest to get their campaign back on track.