Now into his fourth season in Serie A, it’s been encouraging to see how Erick Pulgar’s began to truly demonstrate his quality on a consistent basis in the second half of this term. While he’s undoubtedly a massive talent and showed glimpses of his quality throughout his time in Italy, he’d struggled to really stamp his mark on the pitch.

A real driving force behind Bologna’s fight for survival, his form has been especially excellent since Sinisa Mihajlovic took over the managerial reigns from Filippo Inzaghi at the end of January when the club were in 18th and three points from safety. Finishing in a very credible 10th in the table, six points clear of the drop zone, Mihajlovic’s impact’s been amazing, for he’s won eight, drawn three and lost five of the 16 matches he’s been in charge of. Not bad at all considering their predicament only a few months ago.

Pulgar’s certainly been key towards the upturn in fortunes for the Rossoblu, as he’s scored six vital goals, which have all come from penalties or free kicks, plus contributed excellently in all phases of the game. Interestingly, in every game he’s scored in Bologna have won, so the set piece specialist’s influence has been absolutely integral, with him clearly picking up some pointers from his Serbian manager, who was one of most lethal operators from dead ball situations during his playing days.

To start with his defensive output, and the Chilean international’s energy, intensity and determination have seen him cut out many attacks and make life as difficult as possible for his adversaries. Fierce in the tackle and never one to take a backwards step if he believes he can recover possession, he challenges for the ball with authority, conviction and physicality.

Reading the play adeptly, he also knows when to hold his post, drop back, shift across or support a teammate if required. In addition, when Bologna are pressing high, Erick Pulgar’s executed his manager’s demands nicely, for he times and directs his pressing to arrive on time to force an error while using his cover shadow and body orientation to block passing routes or funnel his opponent wide. An ever willing tracker of runners too, he undertakes his duties with gusto. 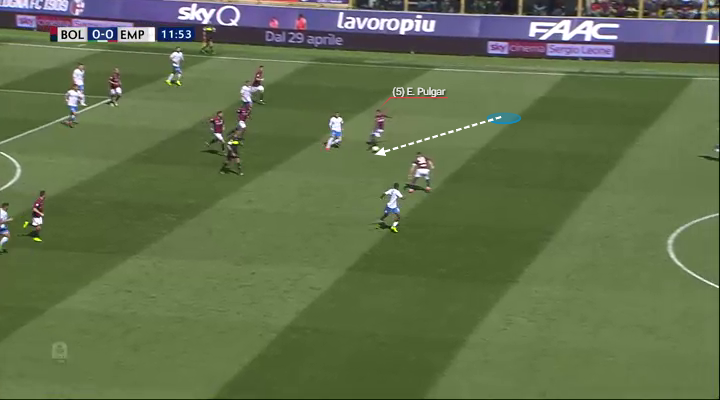 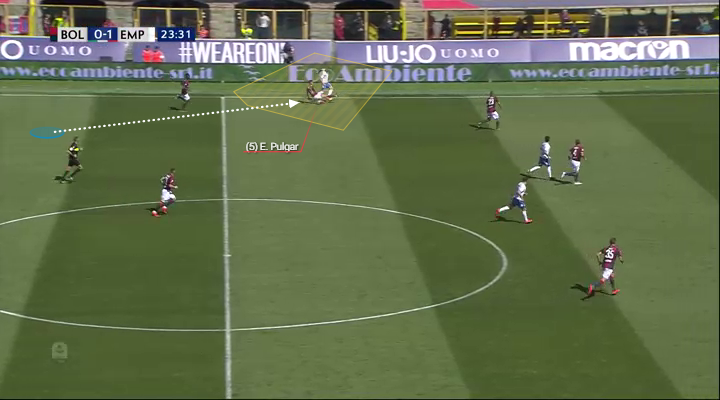 Fantastic tracking back and tackle

Another element as to why he’s such a ball winning machine comes from his stamina and fitness. Covering so much ground, he’s always at the ready to help out his colleagues and snuff out attacks. The fact he averages running roughly 11.5 kms per game (placing him inside the top 10 in Serie A) is a testament to his athleticism.

Moving onto the offensive end, and the Antofagasta born whizz is equally effective in this phase too. Keeping things ticking over nicely with his passing quality, he does a fine job of constructing and connecting his team’s passing moves. Possessing a solid range of distribution, he uses this efficiently to strike penetrative line breaking passes, recycle possession while he waits for an opening, hit raking diagonal switches of play to his wide men or launch through balls in behind. It’s also worth noting how he transfers his elite ball striking skills over into his shooting, for he boasts a ferocious shot from range. 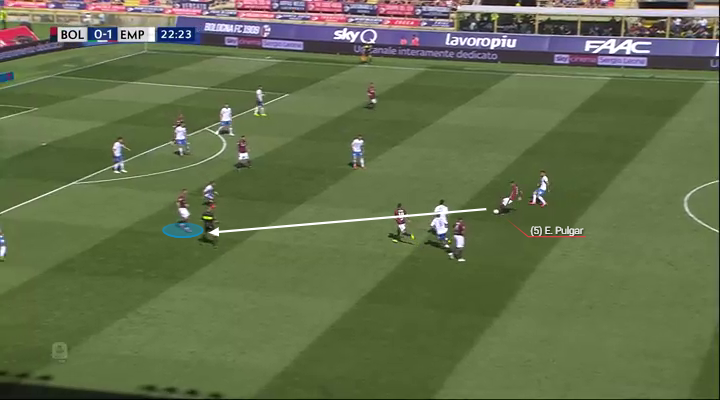 Lovely pass to Dzemaili between the lines 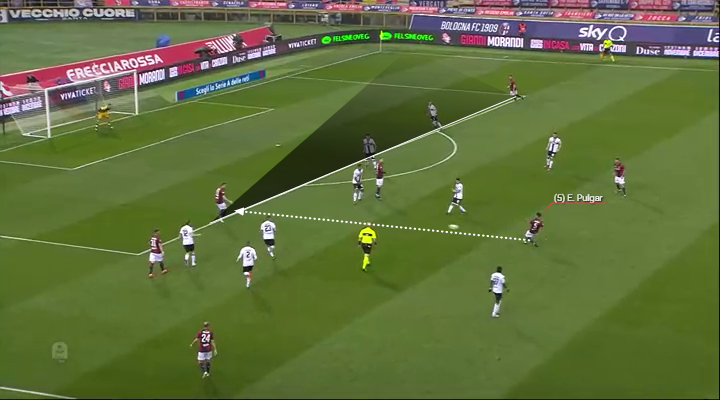 Sublime pass to set up a chance 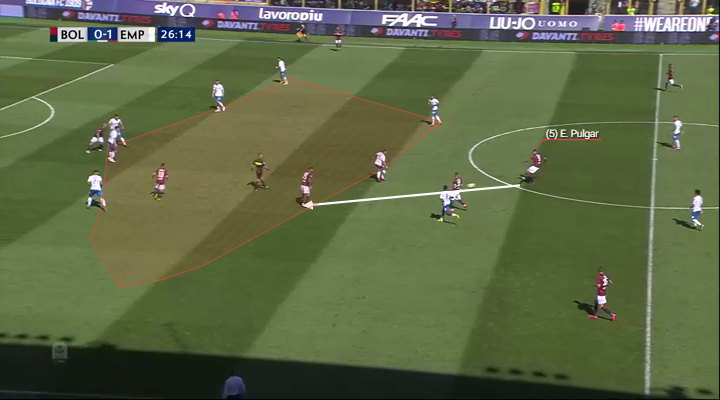 Although he commits the odd turnover due to overdoing it sometimes, more often than not he finds his targets.

Very comfortable on the ball, he carries it upfield with purpose when granted the opportunity to do so like when the opposition sit off. Possessing good control and speed, he surges upfield with purpose as he demonstrates his ability to provoke a press or beat his man.

Positionally sound and awake to where the vacant spaces are present, his movement ensures he gets into advantageous positions to help progress attacks. Whether dropping deep in build up to create 3v2 numerical superiorities, pushing up beyond the opposition first line of pressure or supporting wing attacks, his aptitude in this regard is very valuable indeed. 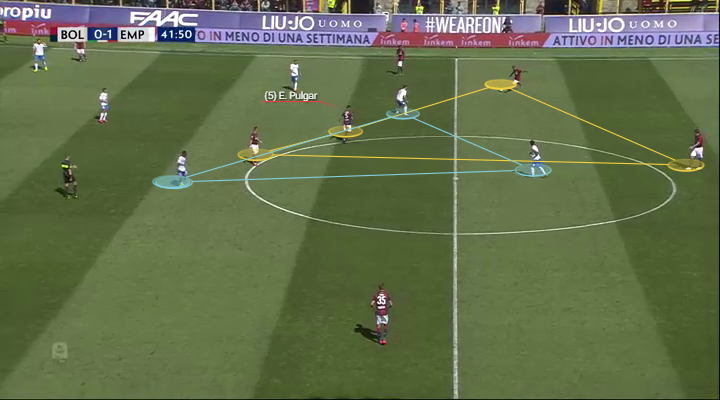 Helping to create a 4v3 and freeing up far side 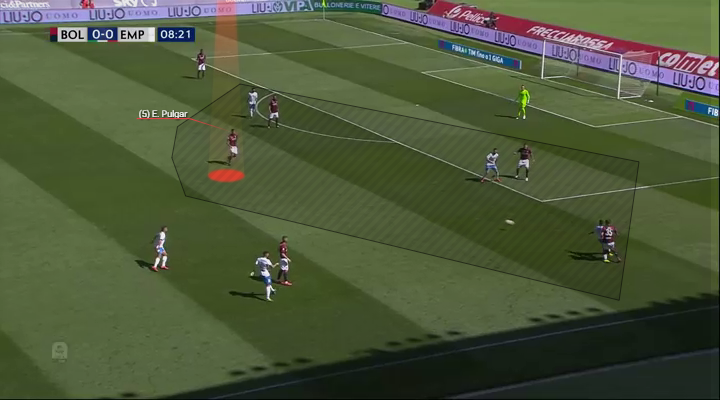 Smart movement to create a 4v3 to progress

Setting the tone wonderfully on both phases, Erick Pulgar has grown into a brilliant embodiment of his team’s philosophy, who are currently playing some of the most aesthetically pleasing football in Italy. Full of grit, force, finesse and intelligence, he’s definitely been one of the most in-form midfielders in Serie A in 2019.

As a result of this, apparently, the likes of Napoli and AS Roma are showing interest in acquiring the former Universidad Catolica prospect. Considering his release clause is set at just €12 million, it’s understandable why many teams would be keen on snapping him up at that bargain price.

But the man who idolises countryman Arturo Vidal and Barcelona legend Sergio Busquets will have to think carefully about leaving just yet as he’s relishing fulfilling his potential under Mihajlovic’s tutelage – so staying put might just be his best option seeing what fantastic form he’s found under the Serb’s guidance.

For more analyses, previews and highlights, visit Eastbridge’s insights page and get the latest on sports. New to betting? Try VOdds.