Despite recently turning 34, the irrepressible Jesus Navas is proving age is only a number, as the Sevilla star, who just recently broke the record for most La Liga appearances for his beloved club, has been in sensational form this season.

Oozing experience, intelligence and quality, Navas has excelled from his right-back post under Julen Lopetegui’s stewardship, with him unquestionably being one of the best fullbacks in Spain on current form.

The Sevilla captain’s work has been so impressive that he justifiably earned call-ups to recent Spain squads alongside Sevilla’s superb left-back Sergio Reguilon.

While his defensive work has been littered with upside courtesy of energetic pressing, selfless support of his teammates and unwavering commitment, Navas’ impact has been most keenly felt on the offensive end.

Playing an integral role in Lopetegui’s offensive mechanics, where he’s handed plenty of responsibility to provide width and depth to attacks, he’s been a real force to be reckoned with.

Motoring up the touchline with gusto, the former Manchester City man’s wicked pace and clever timing of his runs has meant opponents have had a tough time dealing with him. Stretching backlines both vertically and horizontally, Sevilla have done a fine job of creating the conditions for the hard running Navas to thrive.

Regularly implementing the overload to isolate principle, this has seen Sevilla initially direct play down their left, which forces their foes’ block to shift across. This then inherently means their opponents are defending in a narrow shape, thus allowing Sevilla to hit diagonal switches of play over to Navas, who has oceans of space to maraud into. Key to the success of this tactic has been how Ever Banega will typically drop into the deep left half space, a position that gives him the freedom and field of view to use his wonderful passing to pinpoint Navas.

Navas providing a great outlet for the switch 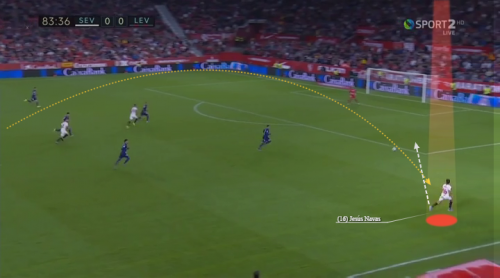 The way Lucas Ocampos from his right wing post often tucks in to drag his marker infield has been significant too, for this has afforded Navas extra room to surge upfield. In addition, the way Ocampos will drop deep towards midfield, which attracts his man, before Navas then surges in behind (also known as opposite movements), has caught many opponents cold. 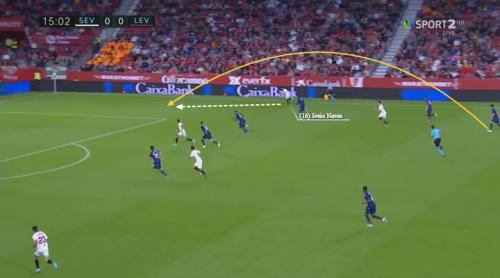 Navas fantastic run in behind

Sharing a complementary relationship with Ocampos, Navas and the Argentine have dovetailed effectively to act as vital pieces of Lopetegui’s attacking framework.

Very comfortable on the ball, Navas’ quality here has been at an equally high level. To start with his distribution, and the fearless leader has done a fantastic job of connecting play, creating chances and getting the ball into the feet of his attackers and midfielders.

Assessing his options thoroughly and quickly making his decisions, his crossing has been a real highlight. Striking the ball cleanly and with incision, he’s provided some precise service for the likes of Ocampos, Luuk de Jong, Nolito and Javier Hernandez to latch onto. 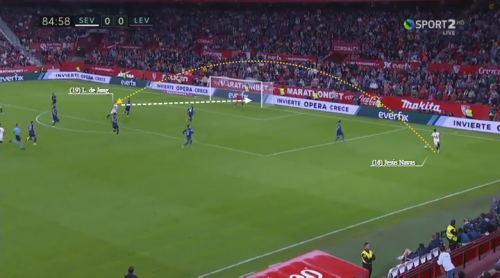 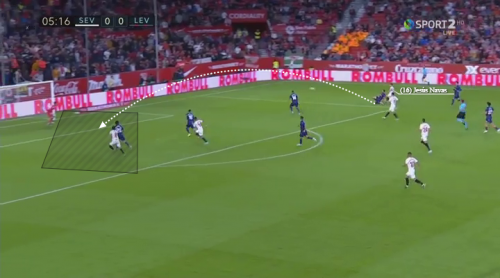 Navas precise cross into the box

The way he can hit driven, chipped, lofted, curling and whipped deliveries into the box, plus usually beats the first man, has meant he can tailor his crosses and cutbacks depending on the situation. Two footed and proficient at spotting runners at the back post, near post, central and when they hold their run at the edge of the box, Navas’ measured deliveries have been crucial. 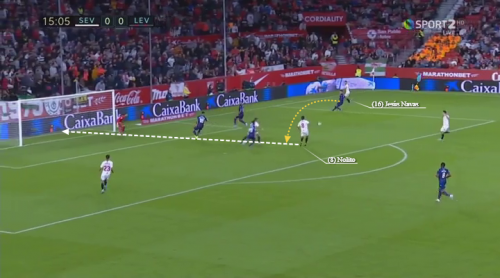 Navas wicked cutback into the box to pinpoint Nolito 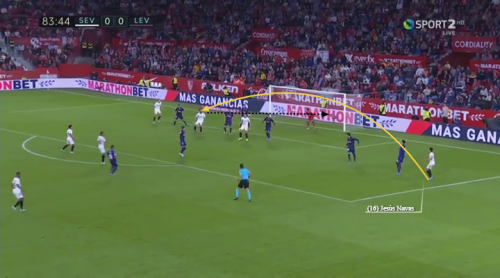 Navas lovely left footed cross to set up a chance

Navas has further proven his worth by playing some crafty through balls in behind to his forwards, slick one-twos with teammates to unbalance opponents and by hitting some penetrative line breaking passes into the feet of his attackers. 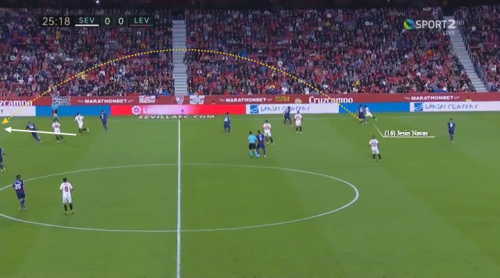 Navas booming through ball in behind 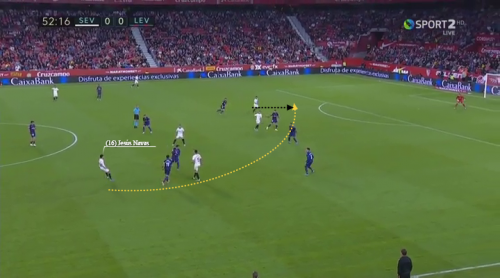 Navas super through ball in behind 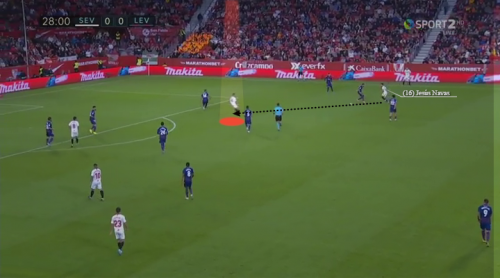 Navas neat pass between the lines

Dynamic and always looking to make things happen on the dribble, the pacy fullback’s aptitude in this regard has been another key piece of his arsenal. Capable of beating his man with some shimmies, feints, stop go moves, crafty cuts infield, alterations of pace and razor sharp changes of direction, his 1v1 dribbling has caused major issues for his adversaries.

Also able to weave out of trouble, provoke multiple pressers to free up a colleague or gain separation to fire in a cross or a cutback, his work with the ball at his feet is a big weapon of his.

With Sevilla currently occupying third place in the table and playing some excellent football under Lopetegui, there’s no denying how crucial the form of their inspirational leader’s been towards their encouraging start to the season.

Ultra fit and competitive, the way the veteran club legend’s fulfilling his extremely demanding fullback role is a testament to his character, as he continues to prove that age is only a number.