Having joined Real Madrid in the summer from FC Tokyo after previously spending four years in Barcelona’s La Masia youth academy, the signing of Takefusa Kubo was a real coup for Los Blancos.

To make matters worse for Barcelona, in an ideal world they would’ve loved to have kept him, but FIFA sanctions forced him to leave back in 2015. He then went onto stamp his mark for FC Tokyo, where the gifted wonderkid, who made his professional debut back in 2017, caught the eye of many elite European clubs.

Faced with the choice of rejoining Barcelona, moving to PSG or switching to Madrid, he choose to join Los Merengues, in what was another blow to Barca.

Agreeing to a six-year contract reportedly worth €1 million a season, the details of his deal underline Madrid’s desire to get their man.

After showing glimpses of his talent in Japan’s Copa America exertions and in preseason with Real Madrid, the diminutive attacker was loaned out to newly promoted Real Mallorca, where he’ll gain some valuable first team experience in La Liga.

Already debuting for Mallorca in their clash with Valencia and then winning a penalty in his second outing vs. Athletic Club, once he’s fully adjusted to life and integrated into Vicente Moreno’s side, the fans of the island club will be in for a treat watching the Japanese starlet.

So calm and composed in possession, Kubo’s an absolute master with the ball at his feet. To start with his dribbling, and his Velcro like control, pristine first touch and ability to outfox his foes using stepovers, feints, dummies and wicked changes of pace and direction ensure he’s a nightmare for defenders.

Mesmerising opponents both in 1v1 situations out wide before driving infield, during counter attacking scenarios or in close quarters in and around the box, the superbly balanced, fleet footed whizz is so effective in many situations. Boasting a low centre of gravity and able to twist and turn out of danger when under intense pressure, he’s such a challenging and unpredictable customer to combat on the dribble.

Accompanying this with his creative passing, he’s adept at unlocking defences with his ingenuitive distribution. Whether hitting penetrative line breaking passes, precise through balls over the top or on the ground, switching play with aplomb, striking neat cutbacks or unlocking defences with some intricate dinks or combination play, this is another wonderful weapon of his. 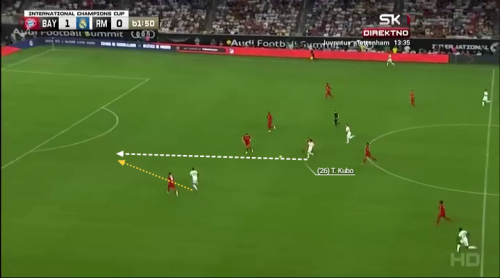 Takefusa’s piercing through ball in behind 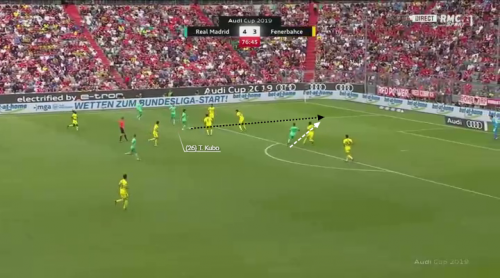 Takefusa’s superbly weighted through ball in behind 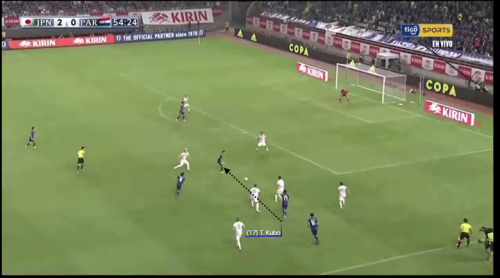 Very handy at delivering teasing set pieces into the box too, this notably increases his threat, as he whips in driven, lofted and curled balls into the area depending on the location of the dead ball.

Kubo’s movement forms a strong platform for him to get on the ball in the first place, as he swiftly recognises openings within the opposition structure to exploit. Scanning his environment proficiently, he gains a good picture of where unoccupied spaces and opponents are so he can take advantage of any vacant zones. Very good at drifting in between the lines or venturing into the half spaces, plus knowing when to stay wide or burst into the box, his intelligence ensures he knows where best to be placed to breathe life into attacks and generate overloads. 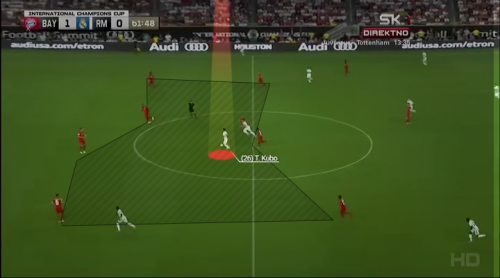 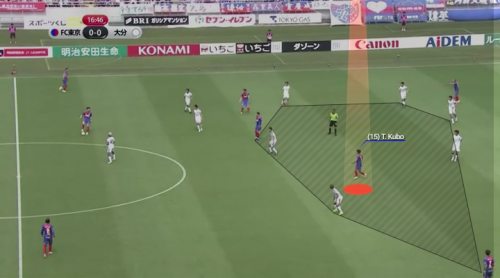 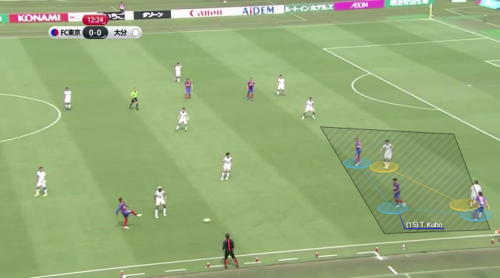 It’s also notable how he moves out of opposition cover shadows to provide options for his colleagues by smartly shifting laterally.

While it’s understandable why he’s been labelled the ‘Japanese Lionel Messi’ due to his size and similar playing style to the Barcelona maestro, and he’s honoured to he compared to the legendary figure, he prefers to focus on his own game. “Being called the Japanese Messi is an honour and makes me proud, but I’m still not at his level and I prefer to concentrate on my abilities and strengths. There are several players like me, but I’m me, not some other player,” he stated.

Upon looking at his numbers for this calendar year so far, and they demonstrate what an exceptional talent he is. On top of scoring 0.33 goals per game and supplying 0.14 assists pg, he’s also completed 2.57 shots pg, 4.04 dribbles pg, 3.8 progressive runs pg, 3.04 touches inside the box pg, 2.04 shot assists pg and has been fouled 2.38 times pg.

Still just 18 and with a tremendous future ahead of him, it’ll be fascinating to see how the Japanese international fares at Mallorca. All the conditions are there for him to continue his remarkable upward trajectory, now it’s up to him to prove he has what it takes to thrive at the highest level. Judging on his sensational talent, top attitude and the fact he’s spent many years in Spain and speaks the language, Kubo looks set to shine.