So you’ve identified a value betting opportunity – how much do you wager? The answer will probably make or break your chances of long-term success. Even if you consistently spot genuine value, the capricious nature of chance dictates that undisciplined staking is the road to ruin. Yet, whilst there are no guarantees in the fickle world of uncertainty, a sensible and disciplined staking strategy should reward value recognition over the long term.

Common examples of dangerous staking behaviours are; aggressively increasing bets to recoup recent losses, or randomly betting whatever happens to be in your online account. Both are likely to result in an empty betting pot. But fortunately there are many strategies that better nurture long-term value.

Betting a fixed amount or percentage

There’s a lot to be said for simply staking a fixed amount for every bet. Say £30 per bet, or 3% of a £1000 betting pot. A fixed stake has the benefits of being slow, steady and simple. It also has the advantage that you don’t need to assess the size of your edge – just determine that there is some value. However, whilst this approach manages uncertainty reasonably well, there is still some risk – for example if you had a 5% edge for an event with 50% likelihood (i.e. 2.1 decimal odds) there’s around 2% likelihood that a £1000 pot would be extinguished within 500 £30 bets.

A fixed bet approach doesn’t take account of increasing (or decreasing) pot size – intuitively it makes sense to increase stake size as betting pot increases. So, instead of betting a fixed amount, a fixed percentage of the betting pot could be wagered. This strategy has a beneficial feature that it should avoid bankruptcy, as the bet is always a percentage of the remaining fund (although in practice the fund can get close to zero very quickly).

This gearing effect, illustrated on the graph below, means that it’s usually best to choose a low percentage of pot – e.g. 3%, if risk management is a priority.

To illustrate the potential impact of these different strategies – the chart below shows theoretical pot fluctuations over the 2015/16 Premier League season, using a shot based statistical model to determine value, assuming all matches are played consecutively. The purpose is to illustrate the potential risk/reward profile of the staking strategies rather than the ultimate return at the end of the season. 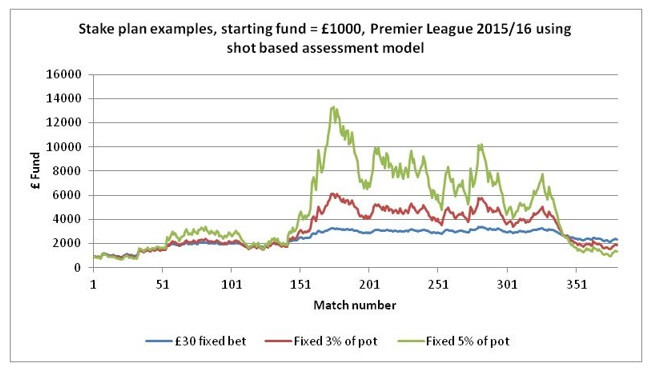 This shows the enormous gearing effect of increasing percentage pot size from 3% to 5%. The latter is significantly more volatile. And, in this case, the slow and steady fixed amount strategy limits losses towards the season end – when the statistical model underperforms.

As discussed, fixed staking is simple and effective – but if you actually go to the effort of independently assessing the likelihood of an event occurring, shouldn’t the stake amount better reflect this assessment? By applying a statistical model (which could range from simple to complex) it’s relatively simple to assess the chance of a particular outcome. This likelihood together with the market odds allows calculation of the bettor’s edge, which equals E = L*O-1, where L = likelihood and O = decimal odds (E is only an edge when positive!).

Intuitively, the stake should increase as the edge increases (to increase expected return) and decrease as likelihood decreases (to manage risk). Fortunately there is a famous staking method that takes account of both edge and likelihood – with the added bonus of being mathematically proven to maximise betting pot over the long-term! This is called the Kelly strategy or criteria (from a paper by J. L. Kelly Jr published in 1956). It can be described in many ways, and using the terminology above is simply E/(O-1) – so for example, if the likelihood of an event is 50% and the bettor’s edge is 5% – then the Kelly stake is 5%/(2.1-1)= 4.55%.

The graph below shows the Kelly Stake varies by edge and likelihood. 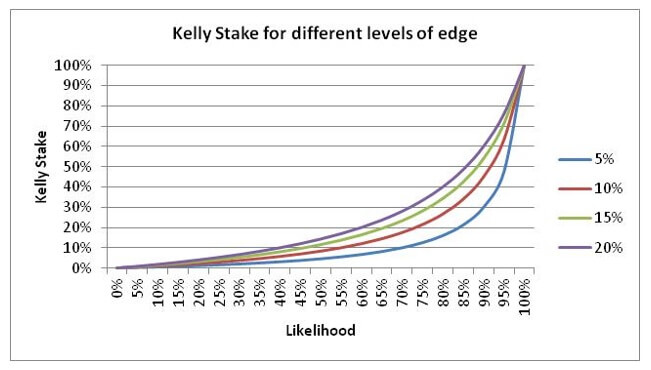 As can be seen the pot percentage can become high, for example a 20% edge for an event with 60% likelihood delivers a Kelly stake of 20%. This reveals one of the problems of the method – the strategy is designed to maximise return, not manage risk. So, with Kelly staking there always remains a reasonable chance of ruin, due to the high percentage stakes.

The other key issue with the Kelly criteria for sports betting is that it’s extremely difficult to accurately assess the edge for a particular event. Often a high edge may just indicate a poor assessment of likelihood (e.g. the market is taking account of more information). In these circumstances Kelly staking is particularly dangerous.

The Kelly method can be adjusted to reduce its riskiness – for example by applying a factor (such as 50% or 30%) to the staking amount. This is attractive because it significantly reduces volatility. Another alternative is to use a combination of fixed and Kelly staking – by betting the Kelly percentage up to a maximum of (say) 3%. This applies a fixed 3% for most bets but reduces the stake even more for unlikely or low margin events.

The chart below shows the theoretical pot using full Kelly and adjusted Kelly stakes over the 2015/16 Premier League season, using a statistical model to identify value – to illustrate the effect of these staking strategies. This particular season was unusual because there were many high odds winners in the first half of the season – under these conditions Kelly performs badly, compared with fixed staking. 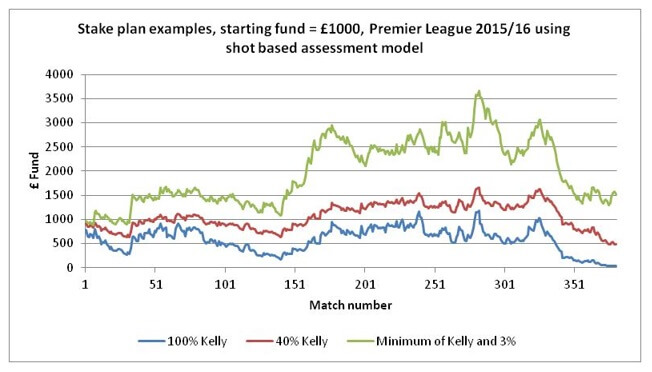