Possessing an insatiable appetite for work and serving as Leicester City’s fearless midfielder anchor, Wilfred Ndidi’s been one of the most important factors towards the Foxes’ fantastic start to the season.

While he doesn’t often draw the headlines like Jamie Vardy, James Maddison, Ayoze Perez, Youri Tielemans, Ricardo Pereira, Caglar Soyuncu and Ben Chilwell tend to, the Super Eagles star has been just as crucial. Consistent, durable and reliable, Ndidi’s performed his role to perfection, adhering superbly to Brendan Rodgers’ demands of him.

Unquestionably one of the premier defensive midfielders in European football this campaign, the ball winning machine is a formidable adversary for any team to come up against.

Doing an exemplary job of recovering possession and breaking up attacks, his scanning of his surroundings, in combination with his concentration and reading of the game, have ensured he’s wide awake to what’s going on around him. This subsequently means he reacts smartly to any nearby threats and makes sound decisions whether to step out and press, shift across, drop back, hold his post or cover any missed marking assignments from a colleague.

In addition, the aforementioned ensures he’s ready to pounce smartly to step up to recover possession for his team, with his measured yet proactive approach paying dividends handsomely.

The fact the rangy holder has such long legs and impressive acceleration sees him nip in smartly to time his interventions too.

It’s also been notable how swiftly he springs into action upon seeing certain cues like a foe receiving with their back to goal, in an open body posture or if they’re on the end of an under hit pass. By responding rapidly to these triggers and angling his pressure to block forward pass routes, this compounds issues for his opponents, who are heaped under immense pressure and subsequently can’t execute their actions cleanly and are more susceptible to committing turnovers. 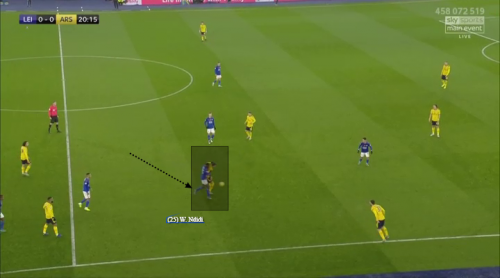 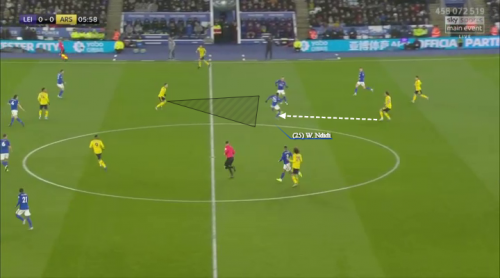 Energetic and full of intensity with his pressing, this transfers handily into his counter pressing, where he does a brilliant job of applying pressure once the ball is lost so his team can enhance their chances of winning the ball back high so they can attack again from advantageous areas. 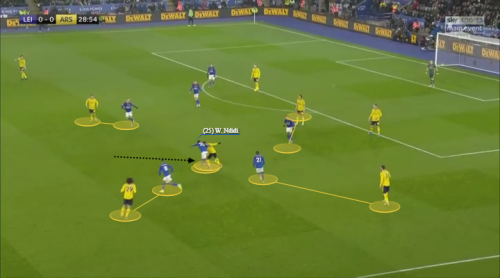 Meanwhile, when it comes to his heading, he stacks up well, for he uses his good leap, judgement of the ball’s flight and strength to persistently get the better of his marker. This comes in handy not only when winning second balls for his team but also when defending crosses into the box and for set pieces situations at either end.

A player who’s so tactically disciplined, makes minimal mistakes and is so difficult to beat in individual battles in the air and on the ground, Ndidi’s stopping output has definitely been of the highest order. Indeed, this is something the numbers back up too, as he ranks first in the premier league for most defensive challenges with 320, is fifth for interceptions on 133, is twentieth for free ball picks ups on 182 and is fifteenth for ball recoveries on 171.

“Ndidi is absolutely key for our team, but for any team, you need a good defensive midfield player that can do a lot of the dirty work as they say,” Rodgers gleamed.

“He is improving all the time. His defensive qualities, he has a great brain to read the game. He smells danger. He can cover the ground so fast, he can press up to the ball, he can cover in. Tactically he is improving and playing better. He is playing in a specific position we haven’t played before where he can run and he has got a clear role to sit and protect and be that link player.”

Despite his offensive contribution being less influential than his elite defensive work, there’s still plenty of upside attached to the 23-year-old’s offensive efforts. Moving efficiently to create good conditions to help the Foxes progress upfield, he’s been excellent at generating numerical superiorities in build up, drawing opponents to open passing lanes and in supporting attacks all over the pitch. 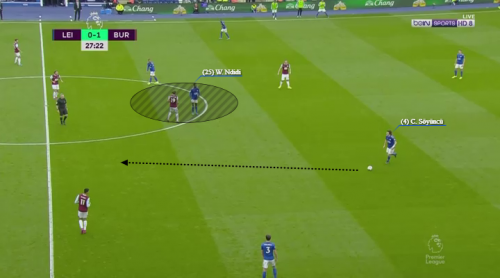 Often manufacturing 3v2 or 4v3 overloads during various stages of possession, this has seen him serve as the free man to bypass pressing structures or to recirculate possession. When doing so, it’s been notable how he persistently receives in forward facing body postures both in between the opposition defensive and midfield lines and their first line of press and midfield lines. This allows him to continue his momentum and keep attacking with a great field of view ahead of him, which is far better than inheriting the ball back to goal or in a closed body shape. 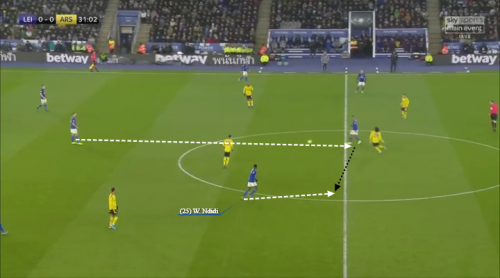 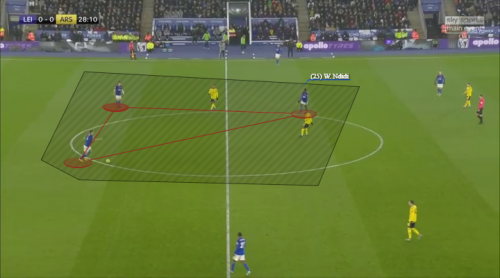 Ndidi beneficial 3v2 against the first line of pressure 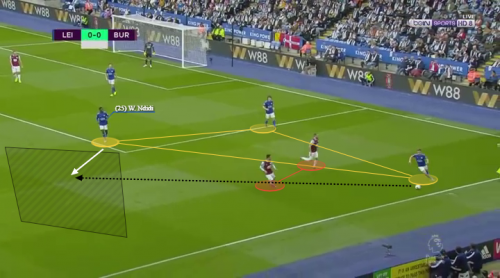 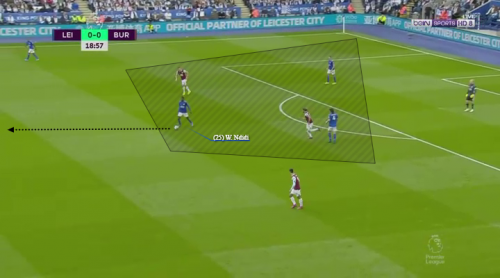 Ndidi dropping smartly between the cbs while forming a 3v2 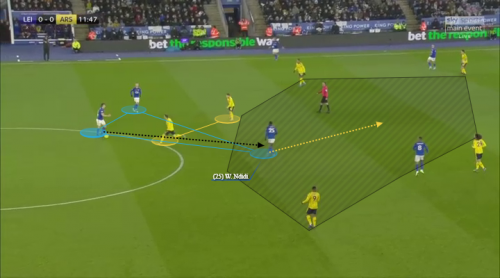 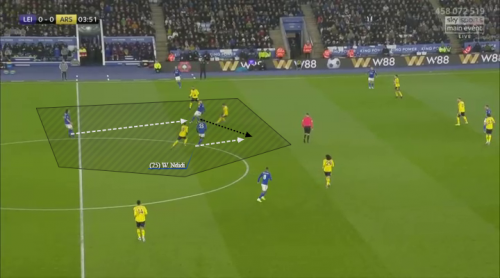 By smartly moving out of opposition cover shadows and exploiting the blindside, Ndidi finds room neatly to receive. Factor this in with his crafty rotations and opposite movements with Tielemans and Maddison, that unbalance and add variety to Leicester’s attacking mechanics, and this amplifies his worth. 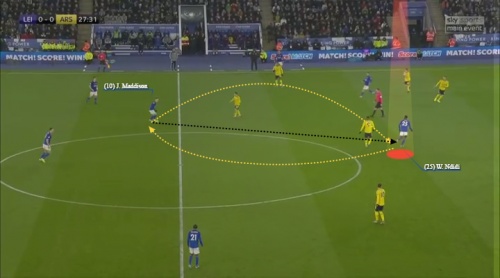 Ndidi crafty rotation with Maddison to get free 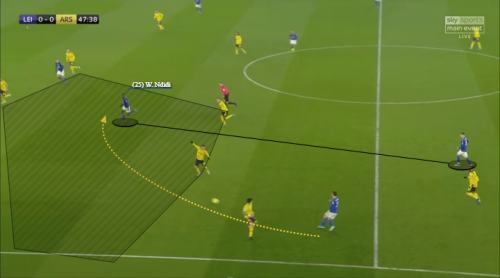 Ndidi top positioning between the lines after switching with Maddidon

Getting better and better with his work with the ball at his feet, Ndidi’s passed the ball coherently to facilitate passing moves and got the ball into the feet of Leicester’s more dangerous technicians. Largely accurate and able to use both feet, he often keeps things simple so to not cheaply turn the ball over cheaply.

It’s been impressive to observe how he’s developed his skills in this area by striking some sharp vertical line breaking passes, quality switches of play and the occasional piercing through ball.

Capable of dribbling upfield with gusto to gain territory and propelling his team upfield, his ball carrying has been another reason for positivity.

“With the ball, he is getting better. His game is simple. He just needs to serve the players in front of him and be an option to play off the centre-halves and full-backs and continuity in the game,” his manager commented.

Providing essential balance and tactical stability to this high flying Leicester outfit, the formidable defensive midfielder’s performed his role to perfection. With still plenty of room for improvement and at still aged just 23, expect his remarkable upward trajectory to continue under Rodgers’ expert tutelage.