In what was an impressive transfer window for Arsenal, the £72 million capture of Nicolas Pepe was a deal that really caught the eye.

After a fantastic season at Lille, where he registered an impressive 22 goals and 11 assists, Pepe underlined his attacking quality. Helping to propel Lille to a memorable second place finish in Ligue 1, he terrorised defences with his explosive skill set. Boasting the unique capacity to score and create, he thrived under Christophe Galtier’s guidance, who formulated a system to get the best out of him.

Predominantly deployed on the right wing, he dovetailed brilliantly with the likes of Jonathan Ikone, Jonathan Bamba, Rafael Leao and Loic Remy. Scoring 53 of Lille’s 68 league goals, this served as a testament to their effectiveness. Indeed, Pepe will be looking to enjoy similarly fruitful partnerships with the likes of Mesut Ozil, Dani Ceballos, Pierre-Emerick Aubameyang and Alexandre Lacazette.

Finishing behind only Kylian Mbappe in the Ligue 1 top goalscorer race, he proved he can consistently find the back of the net against any team. Scoring against Marseille (three times), Rennes, Saint-Etienne (twice) Lyon and amazingly bagging four vs. PSG, he demonstrated he could step up and punish the big boys in Ligue 1.

Clinical and taking his chances with composure, he can score a wide variety of goals. Be it 1v1s with the keeper, cool placed finishes, long range efforts or driven strikes, he’s got a finish to match any situation. Some extra notable details come from how he smartly uses the defender to block the keeper’s view when shooting and how he remains balanced despite being under pressure. 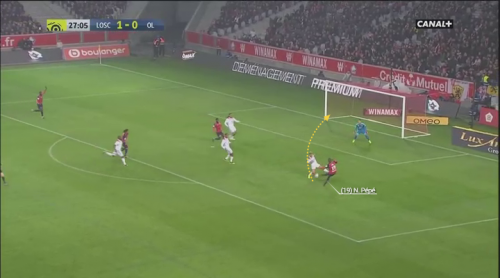 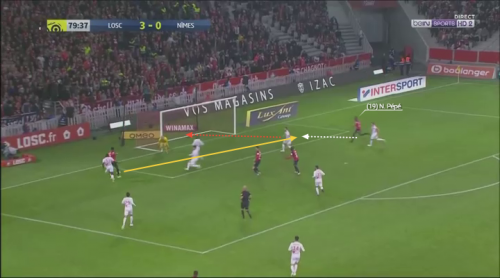 Fantastic blindside run into the box allows him to score 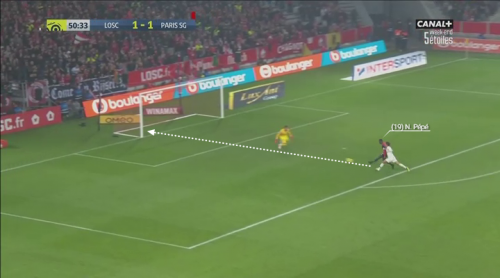 Precise finish when 1v1 with the keeper allows him to score

Bagging eight penalties to boot, this is another endearing attribute, as he takes his spot kicks with conviction.

Pepe’s intelligent movement is vital towards him getting into ideal goalscoring locations. Timing, angling and directing his runs effectively, he’s always searching to break in behind to get into the box. By targeting the gaps in between defenders and starting his runs on their blindside, he can therefore gain vital separation. This subsequently allows his runs to be unimpeded so he can surge forward unchecked. Upon allying the above with his searing pace and this only amplifies his threat. 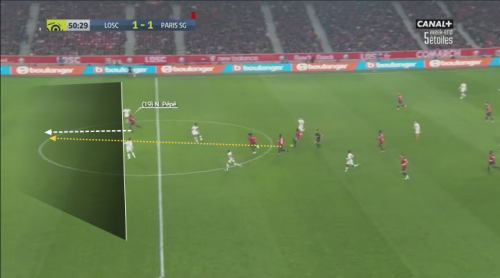 Superb run in behind as he times his movement perfectly 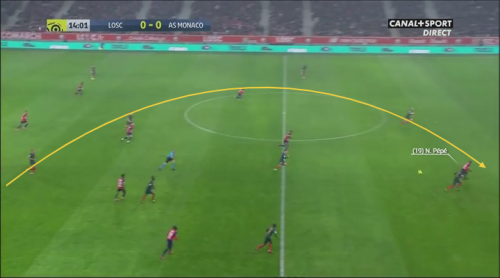 Crafty run in behind as he catches his man off guard

Quick to identify dangerous openings inside the box, he tailors his movement to be an outlet depending on the situation. Efficient at arriving late in the box to latch onto crosses or holding back his run as the defence collapse so he has room to shoot, Pepe instinctively gets into advantageous scoring locations.

His movement is also beneficial when he’s not providing a goal threat, for his shrewd variations compound issues for defenders. At his best when given an element of freedom, he’s great at finding space between the lines too. 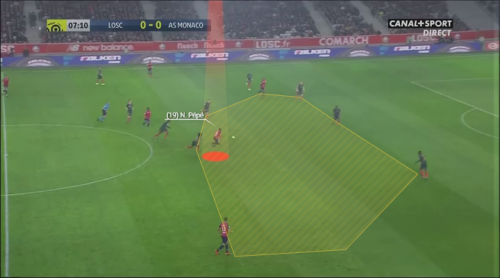 Receiving between the lines in an ideal forward facing posture

From here, he can either link play with his attackers or turn and charge ahead to weave his magic in ideal central zones. A key byproduct of him drifting infield is that it generates room for his fullback to overlap to provide width. At Lille, Zeki Celik was the chief beneficiary of this, with the Turk relishing every opportunity to maraud into the space made available by Pepe.

The way he performs smooth rotations with his offensive colleagues is another positive. By doing so, this means he continually alters reference points for defenders, thus causing marking dilemmas on who should mark him.

It’s also worth mentioning how he can drop deeper to help support attacks, where he can cause overloads to help progress attacks. Another key detail is how he receives possession in ideal forward facing body postures, so he can keep up the momentum in attacks. Indeed, this is much more advantageous than receiving back to goal.

Once in possession, he’s shown what a handy operator he is too. Breathing life into attacks with his creative passing and crafty dribbling, Pepe’s a real difference maker in the final third.

To start with his dribbling, and the 24-year-old’s a nightmare to contend with for opponents. Possessing a neat repertoire of skills, feints, shimmies, plus the ability to change pace and direction rapidly, he’s a force to be reckoned with in this regard. Due to his close control and sound first touch, Pepe can weave out of high pressure situations comfortably or draw fouls in advanced positions.

A vital consequence of his ball carrying comes from how he draws one or more markers, which often frees up teammates upfield while disrupting the opposition’s structure. So hard to read what he’ll do next, Pepe’s a very unpredictable and elusive proposition for any defender to handle 1v1.

One downside to his game is that he turns the ball over frequently and can go alone when a teammate is available for a pass. But as a whole these aren’t huge issues and hardly detract from his overall output.

Meanwhile, when it comes to his passing, Pepe shows plenty of incision and creativity. Never one to pass up the chance to try and unlock backlines, he enjoys piercing defences with aerial and ground through balls. Smart with his combination play in close quarters, he can also link play with some crisp one touch passes and more expansive flicks. 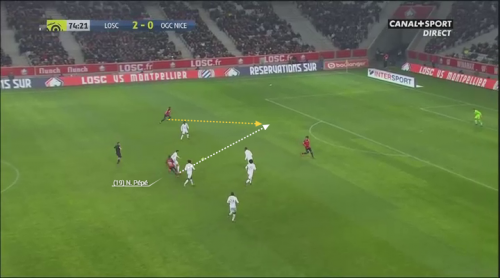 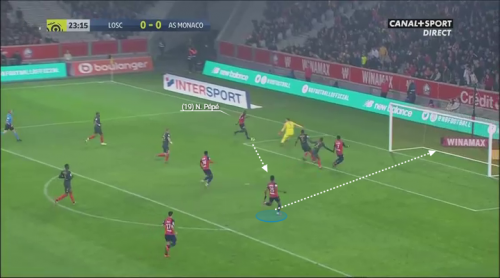 If the defence splitting option isn’t viable, the fact he’ll calmly recirculate possession has evidenced he’s not reckless in forcing the issue.

As his 11 assists suggest, Pepe’s distribution is a handy asset, and one that amplifies his menace in the final third. While it would be unfair for him to shoulder too much of the playmaking burden at Arsenal, it’ll be exciting for Unai Emery to have another chance creator alongside Arsenal’s current band of attackers.

With Emery expected to operate in a 4-2-3-1, Pepe would be a great fit for the right wing slot, a role he’d thrive in having done so in the same base formation as at Lille. If the Spaniard were to opt for a 3-4-3, 3-5-2, or a 4-3-3, a place on the wing or even upfront would also work. It must be said, while he’s familiar playing as a striker, he’s at his best in wider areas where he has the freedom to cut inside, run in behind and isolate himself with his marker.

Whatever’s in mind for him, the former Angers man will certainly give Arsenal another dimension going forward. Still with so much scope for improvement, working alongside Emery and with his talented teammates should do wonders for his development too.

While he’ll need time to adapt to his new environment and the demands of the Premier League, all the signs point to him being a real hit for the Gunners.

Want more analyses and features on your favourite players? Visit Eastbridge’s insights page and be up-to-date with all things sports!