Moussa Sissoko, Newcastle player. Moussa Sissoko, Superman of the Euro 2016 final. Running through walls, finding space that didn’t exist, getting shots away. How Newcastle fans must have wished someone on Tyneside had got him working like that during the past season at the club. Maybe they wouldn’t have gone down.

Moussa Sissoko’s impact on the game is borne out not just from his own individual stats or highlight reel, but something a lot harder to hold. An absence. The complete lack of attacking action down France’s right side during that final. 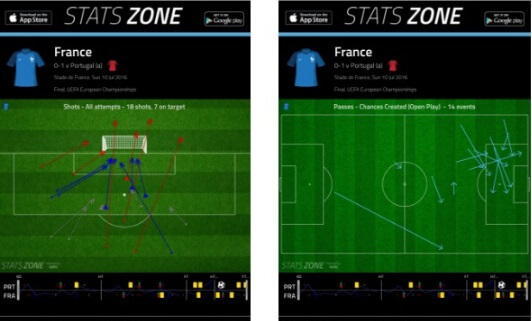 France’s shots came mostly from a central position or towards the left hand corner of the opposition box. When you take a step back in the process to look at where chances created from open play came from, you see a similar thing. Overwhelmingly, it is that attacking left corner of the pitch that is the hub of activity in terms of creating shots.

This doesn’t mean that Sissoko wasn’t involved, he was – he had the most shots and most shots on target of any player during the match (5 and 3, and he did not create any chances). He was just taking those shots from central positions.

Spielverlagerung’s live blog of the final picked up on this in-game. Portugal, largely man-to-man rather than defending more zonally out of possession, were unsure what to do when Sissoko drifted from his starting position on the right wing to a more natural position (for him) in the centre. 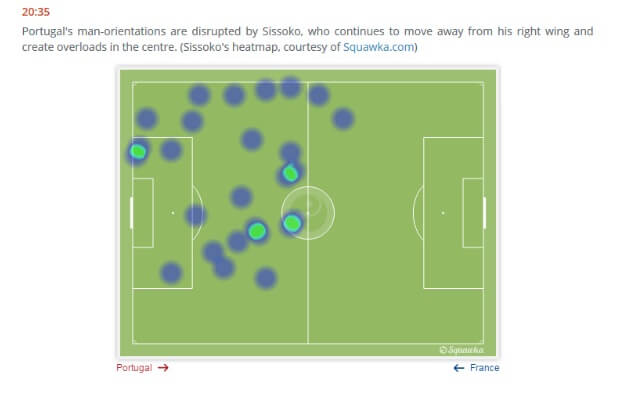 Ageing, neither of France’s full-backs were able to bomb relentlessly up and down their wing, but Sagna in particular is less offensively-minded than his left-sided counterpart Evra. Given that there was so much space on France’s right for him to move into, the fact that Sagna attempted fewer passes in the final third than Evra (13 vs 15) suggests at Sagna’s more conservative preferences.

Perhaps a more attacking player at right-back would have given France even more of a threat in the match than they had. Perhaps, though, this would have left their right flank even more vulnerable. One might imagine that if Sissoko was often drifting inside, Portugal may choose to try and exploit this by attacking down their left while the Newcastle player was out of position.

It may well be, without going back and rigorously studying the match tape, that this was the case. While Portugal only created four chances from open play, scattered pattern-less across the French defensive half, their shots have even less of a right-hand side than France’s do.

It’s true that Payet, Sissoko’s counterpart on France’s left, didn’t exactly set his defensive stats alight (one tackle and one interception). However, the skew of the French team toward that side could easily have flooded the area with bodies and made it difficult to attack down, with the opposite happening on the right.

But this is why football is a chess game. Sissoko starting on the right and moving inside created space and confusion in the Portuguese half for him. But it also contributed, to varying degrees, in a lack of attacking threat and a defensive vulnerability down the right side.

Or maybe football isn’t chess, but physics. For every action there is an (mostly) equal and opposite reaction. Newton’s third law of motion, demonstrated right there with a Newcastle midfielder.