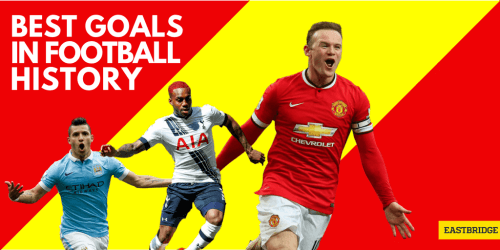 We have seen a lot of great feats on the football field with players displaying show-stopping goals at the height of their club careers. But there are those who cement their status early on in their debut, proving themselves worthy of weighty recruitment deals and dispelling apprehensions from critics. We take a look at the ten best player debuts in football clubs and why they’ll always be in the books for dream first appearances.

Shearer was only 17 years old when he made the leap from the youth squad to the Southampton team. He had his professional debut in March 1988 and quickly gained fame with a hat-trick against Arsenal in his starting game. He assisted the team to a 4-2 triumph and became the youngest player to hit a hat-trick in the top division.

Klinsmann moved to Tottenham Spur in the Premier League for season 1994-1995 amidst misgivings from the media due to his reputation as a diver. He made his debut against Sheffield Wednesday and went on to score an outstanding header. He performed a self-deprecating dive onto the turf in jubilee, thus initiating the now famous chest slide celebration done by players around the world. His humor and skills endeared him to fans and he snagged the Football Writers’ Association Footballer of the Year in 1995.

From Juventus, Fabrizio Ravanelli made a move to Middlesbrough on a £7 million deal and was one of the foreign recruits of the club. The transfer was highly publicized and he more than delivered to the club’s expectant crowd. On his debut, the “White Feather” scored a hat-trick against Liverpool, immediately making him a popular man in Middlesbrough.

Alvaro Recoba first played for Inter in the same match Brazilian football star Ronaldo Luis made his debut. Uruguayan Recoba made a mark though, scoring two goals in the last ten minutes. One shot was from 30 yards and flew past the goalkeeper. The other was an elevated free kick in the top left corner from the same distance. Those two jaw-dropping goals gave way to Inter’s triumph at 2-1.

Alan Smith had the dream debut at age 18. Leeds United was losing at 1-0 against Anfield when Smith was sent in the field. He scored at his very first touch of the ball with a composed strike only a pro would have made. This propelled him into the English football season and he went on to become the undisputed first-choice striker along with Jimmy Hasselbaink.

Stan Collymore moved to Bradford City on a free transfer and scored a marvelous overhead kick against Leeds United in the West Yorkshire derby at Valley Parade. This earned him the title of scoring the best Premier League debut goal.

Wayne Rooney also had the dream start when he was recruited by Manchester United. His £27 million jump from Everton happened to be a good deal as he netted an excellent hat-trick in a 6-2 victory against Fenerbahce. He became the youngest player to score a hat-trick in the Champions League in his first game.

Without their regular starters, Tottenham had Danny as their substitute in the match with Arsenal. It didn’t take long before he hit a volley The Times has called “so thunderous, you could hear the whack off his boot above the din of the raucous crowd.” He gave the Spurs the lead in the 10th minute and the team went on to win. This was Tottenham’s first win off Arsenal since November 1999. That goal has gone down in Tottenham folklore as one of the best in the North London derby.

Aguero came in as a substitute 59th minute into the game of Manchester City against Swansea. He scored his first goal within nine minutes after a simple tap in from Micah Richards. He then topped it off with an assist for David Silva for a late goal. He scored again in injury time with a superb 30-yard strike. Aguero’s debut drew rave reviews from journalists and he exploded into the top flight after that opening game.

Anthony Martial made an early impact in his debut for Manchester United. He hit an exemplary final goal past Simon Mignolet in th 86th minute of the game against Liverpool. In his victory spree, he placed a finger to his mouth as if to hush critics who questioned his big transfer. Martial closed the season with 17 goals, making him Manchester United’s top scorer of the season. He also won the Golden Boy Award for Europe’s best under-21 player in 2015.

Who will be the next players to make historical goal debuts in football? Keep up-to-date with league fixtures in sports betting broker Eastbridge and try your hand at Skype betting.