Felipe Gutierrez couldn’t have dreamt of a better start to life in MLS since joining from Real Betis, as the Chilean currently sits top of the goalscoring charts, with five goals, and has oozed class and creativity from his midfield station for Sporting Kansas City.

Although he couldn’t propel Peter Vermes’ side to their third straight victory, the 27-year-old put in another shift that was littered with upside, with the slick midfielder being key towards his side coming back from 2-0 down to salvage a 2-2 draw vs. the Colorado Rapids.

Granted much freedom to use his intelligence to identify and exploit open spaces within the opposition defensive structure, Gutierrez’s aptitude in this regard persistently saw him unbalance the Rapids rearguard. Using constant head checks to give himself a regularly updated mental imagery of where the vacant spaces were in relation to his opponents, teammates and the ball, his purposeful movement thereafter saw him take up excellent positions.

The 2015 Copa America champion’s capacity to take advantage of zones between the Colorado defensive and midfield lines, and when pushing up into the gaps between the home side’s central defenders served his side especially well, however. In such cases, he posed a huge decisional crisis to his adversaries, for they were confronted with tough choices on whether to hold their spot or rush out to press him, with both potentially having negative structural connotations either way.

The graphics below illustrate the headaches he caused for Anthony Hudson’s men, for Gutierrez has put himself into tremendously favorable conditions to receive and attack the compromised Rapids. 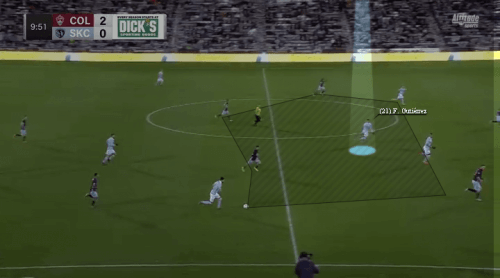 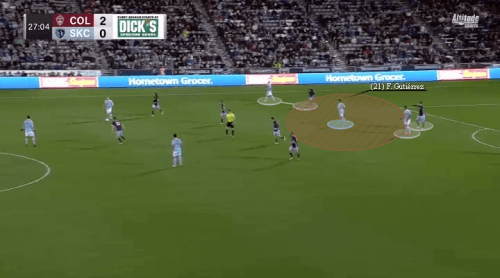 The second one is particularly interesting, as he shrewdly notices Deklan Wynne’s been drawn to Johnny Russell and Khiry Shelton has occupied the attention of Danny Wilson. Gutierrez duly pushes upfield into the sizeable gap, manufacturing a 3v2 numerical superiority in the process, thus supplying a brilliant option for a colleague.

Performing seamless, nicely executed rotations with his left winger, Russell, arose as another key aspect of his display. In doing this, Russell would drop deep towards the ball, crucially bringing his man with him. Upon witnessing this, Gutierrez would accordingly push upfield in the opposite direction to the Scot, something that disrupted the Rapids’ setup, while importantly allowing Gutierrez to use his dynamism in advanced areas. The graphic below is a testament to this tactic’s effectiveness, where Russell’s movement has pinned two trackers and freed up Gutierrez. 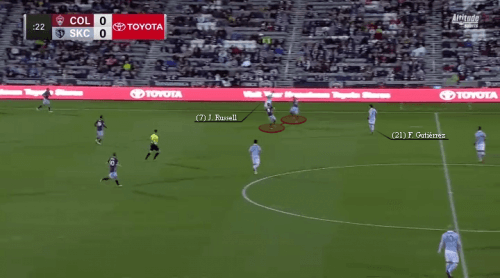 Gutierrez’s scintillating skill on the ball and incisive passing qualities were vital for his team too, adding crucial imagination and creativity to their possession phases. Whether playing raking cross-field diagonals, intricate one-touch layoffs in confined areas, penetrative line breaking ground passes or wicked through balls over the top, his distribution range was a joy to watch. In addition, his Velcro-like ball control, inventive dribbling and razor-sharp changes of pace and acceleration provided an additional source of menace to his opposition.

Indeed, the former Dutch Eredivisie MVP winner with Twente’s contribution to the Wizards’ 91st minute equalizer perfectly encapsulated his mastery on the ball. Here, his beautiful dribble enabled him to get by two men to deliver an absolutely mesmerizing pass, that remarkably took out four Rapids players, to pinpoint Jimmy Medranda, who subsequently found Shelton, with the striker then ingeniously playing in Diego Rubio to score. 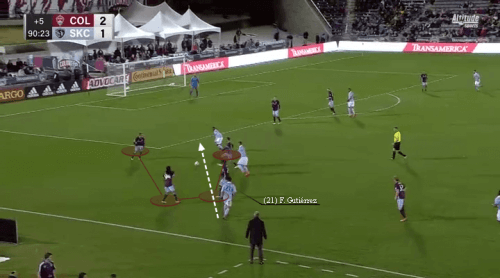 Meanwhile, on the defensive end, his energetic pressing would’ve delighted his manager, with his application and awareness to respond so rapidly to triggers, such as his marker inheriting possession with their back to goal or in an open body posture, in combination with his sound judgement and timing of his interventions, proving very valuable indeed.

“[Felipe] is going to have teams worrying, which means more room for me, more room for Ilie and the front three guys,” gleamed one of his partners in crime, Roger Espinoza. “That’s great that he brings all those qualities – very technical, good passer of the ball, gets on the end of things, gets in the box, and tries to score. When we are defending and teams pin us in, he’s right there helping too.”

His manager then echoed Espinoza’s opinion by explaining what an asset Gutierrez is to the roster, stating: “If there’s a player that fits into our system, he’s one of those guys. He’s relentless in the way that he goes after the ball. He’s got a great engine (and) can go up and down the field. Really, really street smart on the field. Definitely a player that’s going to have an impact on our team.”

Both sets of comments certainly couldn’t be more correct, as the versatile Gutierrez, whose wand of a left foot also sees him produce wonderful set pieces, is looking every bit the astute signing the club intended him to be.

The challenge now will be keeping up his incredibly high levels of form in all facets of the game.

This player analysis will surely come in handy when you place your next bet. And we’ve made that easier for you through our Skype Betting. Make sure to check it out!