Barcelona’s capture of Frenkie de Jong is a fantastic piece of business, and one that makes perfect sense for a team who typically looks to dominate possession.

Even though they’re slightly less expansive and a bit more pragmatic under Ernesto Valverde’s stewardship than in previous years, Barcelona will still look to impose themselves on their foes by playing some progressive football. And de Jong’s dynamism, ambition to drive his team forward and technical prowess make him an ideal man to breathe life into attacks.

Keen to stamp his mark from the outset, he intends to hit the ground running to make an impact for his new club. When quizzed on his move to the Catalan giants and what he makes of the comparisons between him and former legends Xavi and Andres Iniesta, he didn’t entertain such talk, instead focusing on his excitement about his €75 million move. “I don’t want to be compared with those players,” he asserted to BarcaTV. “It’s the perfect club for a midfielder. They hold onto the ball well, they control the play. It suits me perfectly.”

“I want to start most games. All players want that. I’ll work as hard as I can in training to show what I can do in games. I like to play attacking football, for it to be attractive and for people to have fun when they come to the stadium. Both me and Barca are really keen to win the Champions League this year, and I hope that’s what happens.”

Set to be a massive asset in Valverde’s offensive plans, his multifaceted skill set should see him help his team in so many different situations.

A central midfielder who can play in a variety of areas in the pitch, he’s adept at dropping deep between or alongside his central defenders, pushing into the half spaces, venturing into the 10 spaces, operating in true central midfield zones, rotating out wide or even making runs off the shoulder of the deepest defender. 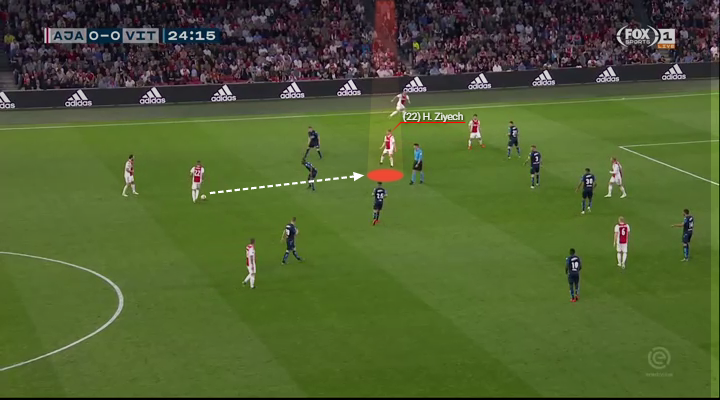 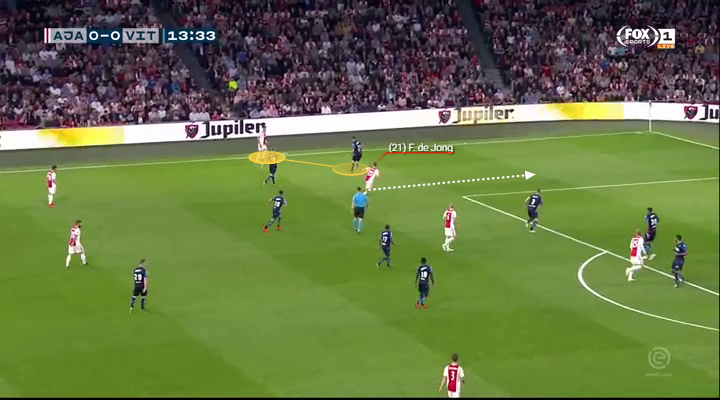 To especially focus on the half spaces, and he uses the strategic benefits attached to gaining possession in this space wonderfully. Allowing himself to receive here consequently gives him more time and space to assess his options with a full view of the field away from the congested central areas. This consequently means he can then carry the ball forward or pinpoint a colleague with his technical proficiency.

A further testament to his smart movement comes from how he times it so he generates numerical and positional superiorities to help his team bypass the opposition. 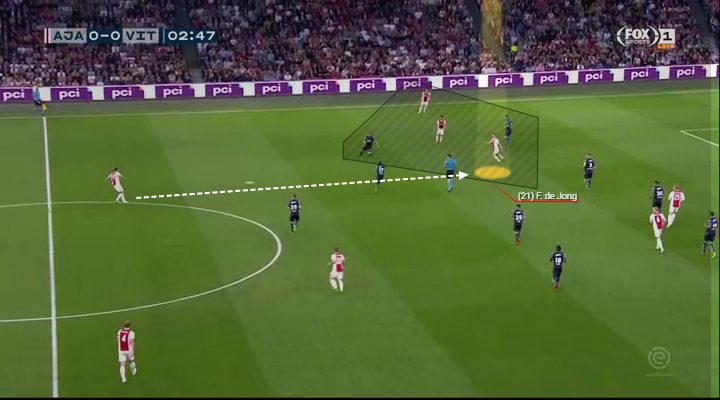 The fact he’s so good at moving out of opponents’ cover shadows to provide a teammate with an option, rotating positions crisply and at pinning his marker to manufacture room for his colleagues only adds to his menace. 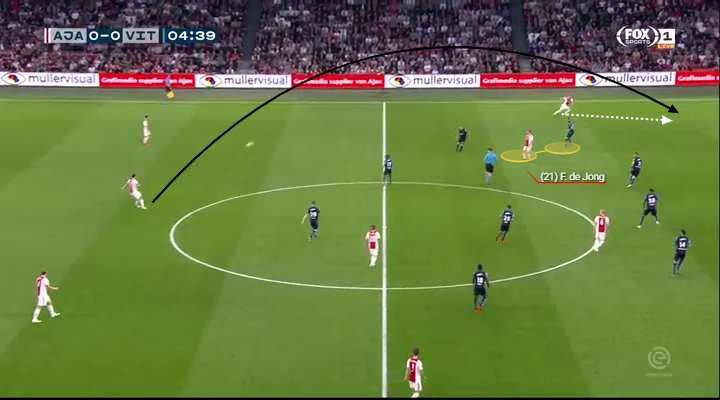 Frenkie De Jong attracts a marker to free up his fullback

Technically masterful, the Dutch international starlet’s capacity to break the lines with his fantastic passing and dribbling will also be a huge source of upside for Barcelona. To begin with his passing, and the Dutchman’s vision, capacity to receive with his head up and execute assuredly sees him persistently able to break down opponents with incision.

Distributing with precision over long, intermediate and short distances, he’s got a pass to match any situation. Whether it be combining intricately in tight spaces, playing penetrative line breaking passes, wicked through balls in behind, raking diagonal switches or building out from the back cleanly, he’s unquestionably proven his worth here. 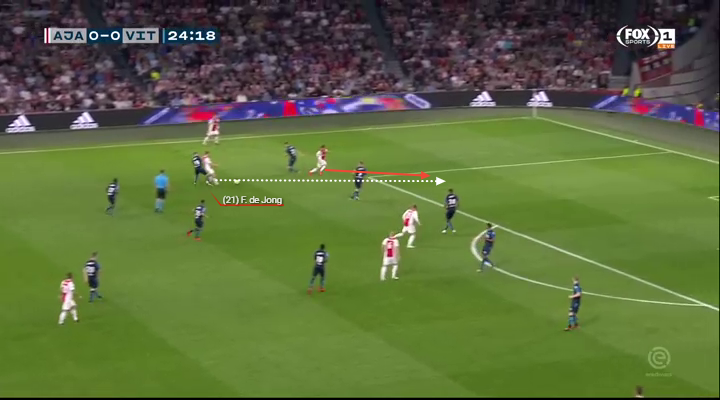 Frenkie De Jong’s incisive through ball in behind

When it comes to his dribbling, the fleet footed de Jong is just as influentially, with his scanning supplying him with the ideal foundation to weave his magic, thus enabling him to know where his nearby opponents are located so he can make informed decisions. 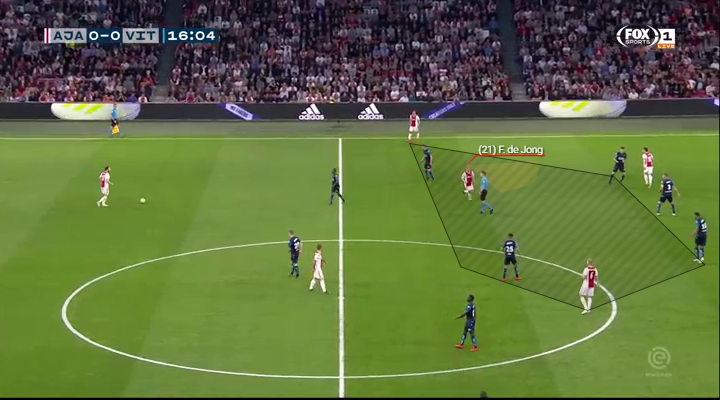 Capable of outfoxing his markers in a multitude of ways, he uses his trademark body feints, wicked changes of pace and direction, lovely shimmies and boasts a nice repertoire of skills and subtle touches. In addition, his impeccable first touch and Velcro like control see him able to weave out of trouble when harried or in confined spaces as the press resistant midfielder’s so hard to keep quiet.

Driving his team forward at every available opportunity, he does a brilliant job of winning free kicks in dangerous areas and drawing out trackers to creating disconnects in opposition backlines courtesy of his ball carrying prowess. 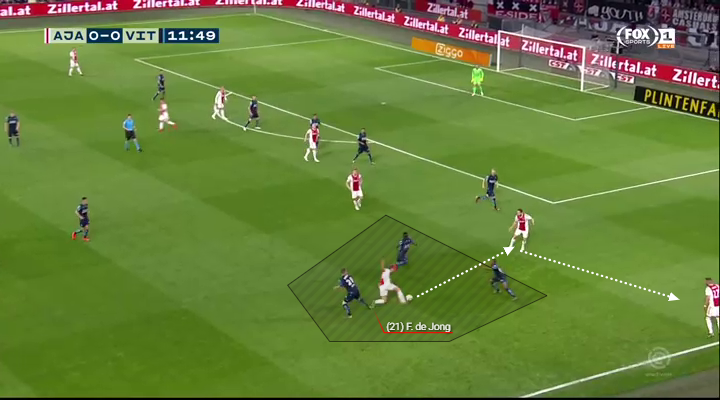 Having just started training with his new teammates, the extraordinarily gifted de Jong will now begin his integration into the vastly talented Barca first team, as all the signs point to this being the start of a long and fruitful relationship with the Catalan giants.