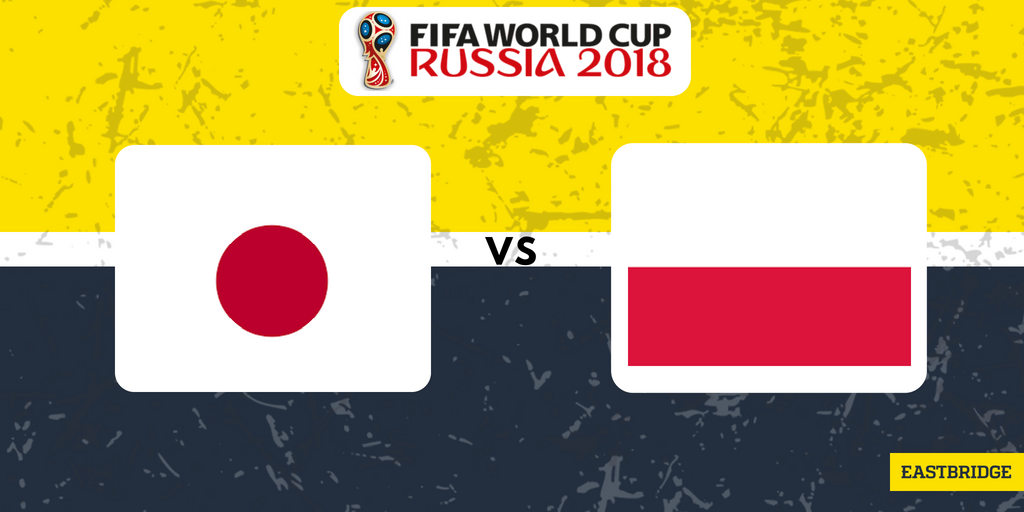 Japan is known to the world as Nippon or “The land of the rising sun”. The term is actually only indicative of the country’s relative position to China. In this year’s World Cup showpiece though, it has meant so much more. The lights are all up and gleaming for Japan as they continue to show they are the tournament’s dark horse on the loose. They’ve had a bright run thus far and sits at first place in their group with four points. They can advance to the last 16 with just a draw against already-eliminated Poland, but Akira Nishino’s hardworking team are aiming to finish on top of Group H.

– Japan left Group H possibilities wide open after putting a stop to Senegal’s surge at 2-2 draw.
– Keisuke Honda made history as the first Japanese player to score in three different World Cups (South Africa 2010, Brazil 2014, Russia 2018). He is now also the top Asian goalscorer in World Cup.
– Poland limped out of the tournament after Colombia’s triple blow (Poland v Colombia: 0-3).
– FIFA fined the Polish Football Association of CHF 10,000 for a political and offensive World Cup banner displayed by Polish fans after their side’s defeat to Senegal.

The Samurai Blue just need a point against the Poles to reach the next round. If they make it through, it will be the third time the nation will compete in the knockouts. (2002 World Cup: Round of 16, 9th position; 2010 World Cup Round of 16, 9th position). Captain Makoto Hasebe is eager to claim all three points in the upcoming match though. Japan looks solid and they’ve been nothing but consistent and stable under Nishino. They currently hold the record for most World Cup games played without referee red card, a proof of just how disciplined their side is. Their cohesion has been their strongest asset going into the playoffs and they are able to come up with attacks from varying patterns.

Poland is out but they still have everything to play for in this match. Pride is on the line and they need to save face before they pack bags and head home. Captain Robert Lewandowski is hoping the early exit can spur them on to victory for the sake of fans and supporters who’ve brought them to Russia. They’ve been one of the worst teams in the first two games and they have zero points in the standings. And so, the Polish camp are up to the arduous task of beating the Japanese. The last time they’ve met with an Asian opponent was in the 2002 World Cup and things didn’t turn out too well. They were defeated by host Korea Republic by 2-0 and they will more or less experience the same here if their strikers don’t go out of their way to fly some through the net.

Poland and Japan hold the same record in last six friendlies and World Cup games with three losses, two wins, and one draw. Asian handicap trend shows that this will be a hard-fought battle between the two teams.

Japan
Keisuke Honda came in the game against Senegal as a substitute. At 78’ however, the unassuming attacking midfielder hit the leveller for Japan in the thrilling 2-2 draw. Long shots and counter attack are what he does best and they will surely be on display in this final group match.

Poland
Grzegorz Krychowiak scored Poland’s first and only goal to date through Grosicki’s assist. His 86’ header came from eight yards out to cut Senegal’s lead for Group H Matchday 1. His ball interception is quite strong and the Poles can rely on him for aerial duels.

Japan: 4-2-3-1
Japan has no pressing injury concerns ahead of clash opposite the Poles. They will likely stick with this set-up and make the most of the advantage of attacking flair and midfield strength combo. An all-action midfielder can line up with a defensive midfielder to carry the ball box to box.

Poland: 4-2-3-1
Utility value/balance will be key to winning this game and Adam Nawalka’s men may take on the field in the same player distribution as Japan will. They can place Lewandowski as primary goal scorer and midfielders can create the chances for each other.

Japan v Poland: 2-2
Exhaustion on Japan’s part and Poland’s drive to get at least one win before bowing out can drag this game to a draw. Japan will put forth a clean-cut play. Nothing insane or fancy, just technical nous. No star striker in their team but cooperative and organized players working together. If they want to get a hold of all the points, the football samurais will need all men forward. Oddly listless Poland will haul for goals as consolation.

Contact us on Skype today to place your bets for this bout. You can also create an account with VOdds to enjoy an awesome World Cup bonus.