After having broken the Premier League record for goals scored in consecutive matches, won a call-up to the England squad, and following the Luis Suarez model of scoring your way back into (some) peoples’ hearts after a racism incident, Vardy will probably be happy with the second half of his 2015. However, recently there has been an image that has been doing modest rounds on Twitter, showing a drop-off in production. So what’s going on? 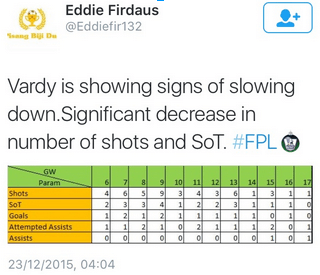 Early on in the season his conversion rates (the percentage of shots he scored) was at 25-30% at times which is extremely high, particularly over more than a couple of games. To put this into some further context, Lionel Messi, the most elite of elites, had a conversion rate of around 23% in 2014/15 and, while Vardy may be good, he is certainly no Messi.

Part of this efficiency may have been down to their quick counter-attacking tactics. Counters generally mean that opponents are out of position, which obviously makes creating scoring chances easier. However, this, and the pressing that Leicester engage in on the defensive side of things, don’t have the feeling of sustainability about them. Some focus was on Pochettino a short time ago for his teams tiring in the latter half of the season, and the same could be true of Leicester and Vardy, who does a lot of work closing down defenders.

The image above certainly suggests that Vardy had started to cool in recent weeks. A longer term look at his season in pure shots terms seems to show that he might be dipping back to his form in the first few weeks in the season production-wise. 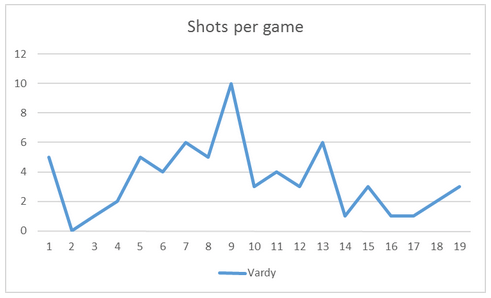 Apart from a strong first game, Vardy didn’t seem to take off until the fifth game of the season. The fourteenth game, the one in which he broke Ruud van Nistelrooy’s goalscoring record, seems to have been the second bookend to the hot streak. However, this has coincided with their hardest run of games yet: Manchester United (home), Swansea (away), Chelsea (home), Everton (away), Liverpool (away), Manchester City (home).

Mahrez, though performing at a lower level to Vardy in terms of shooting (which, while they’re not a perfect measure of attacking ability, are still nonetheless a useful pointer – elite strikers generally have more shots, though this is not to say that having more shots makes you an elite, as Andros Townsend may be able to tell you), has still managed to maintain a somewhat similar level. 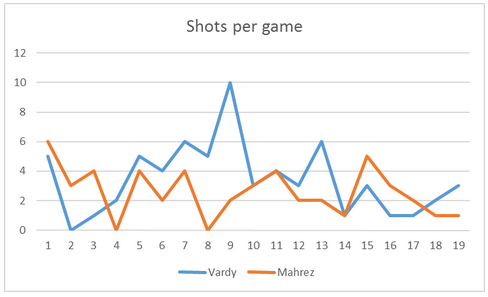 Of course, Vardy can only work as a striker with a team operating behind him. While Mahrez’s shots may have been at a similar level, his chances created have been down and Drinkwater, who has also been highlighted as an important cog in the Leicester machine, missed the bulk of three games through injury. 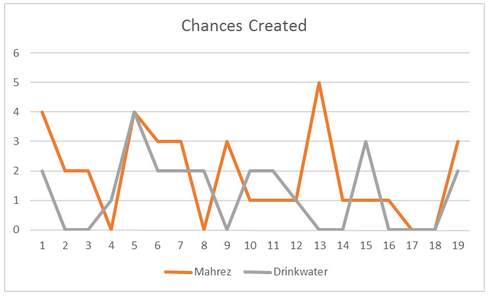 Given Vardy’s sudden rise from relative obscurity to league topscorer this season, gut instinct perhaps edges us towards thinking that this is an inevitable cool-off, at least in terms of goals (his conversion rate for the season is still hovering around the 23% Messi level). The recent run of games, though, does make it difficult to know for sure and, as with many things, only time will tell for sure.