Inconsistency pitted against a struggling unit, which has failed to produce a positive performance since their opening game. This weekend’s, Saturday evening game is littered with potholes. The data provided is constructed of extreme positives and negatives, as a result making it extremely difficult from the prediction standpoint. However, it’s the element that makes this match-up so intriguing. The data produced by Hertha Berlin’s performances at the Olympiastadion reflects similarities to that of Everton on the road in the Premier League. It is becoming ‘hard to-watch after four consecutive negative performances almost inevitably Hertha turned in a positive performance. Consequently, resulting in a much needed three points. From the opposite side of the fence, Borussia Monchengladbach has at times produced sensational numbers. However, those outstanding performances have been overshadowed by a number of ‘horrific’ performances. It’s unfortunate those extreme negatives have occurred, as at times ‘Die Fohlen’ have appeared to be extremely exciting. 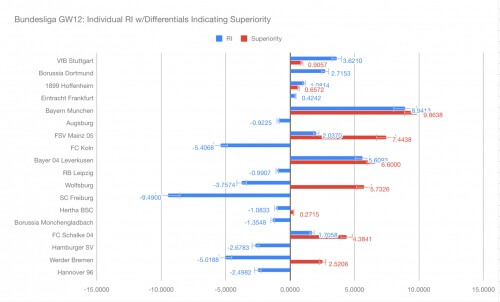 The closest matchup in game week twelve, from the Bundesliga. It’s tight, it’s extremely tight. The data extracted from both Hertha Berlin and Borussia Monchengladbach’s performances (home versus away), indicates the narrowest of margins favoring Hertha. As a result, awarding Hertha Berlin a superiority of 0.2715. Analysing each team’s RI (Rating Index) will enable the experience of observing the levels between the sides if, in fact, they exist. Hertha Berlin’s rating index is constructed of an AI (Attacking Index) of 5.0000 and a DI (Defensive Index) of 6.0833. In comparison with the data they possessed in the 2016/17 season, Hertha held an AI of 6.3247 and a DI of 5.3424. The levels appear to remain similar, while the correlation between AI/DI seems to have been reversed. However, taking into consideration the infantile state in-which the Bundesliga currently lingers. The correlation between AI/DI may well return to a similar state which was possessed in the 2016/17 season. Whereas Borussia Monchengladbach is constructed from an AI of 7.4000 and a DI of 8.7548. In comparison with the data they produced in the 2016/17 season, Monchengladbach possessed an AI of 4.8039 and a DI of 7.4071. Their attacking activities appear to have increased, whereas their defensive abilities seem to have remained in a similar state. 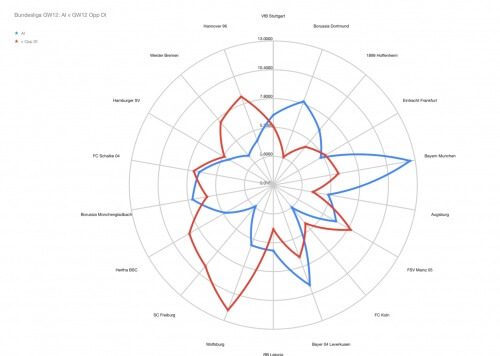 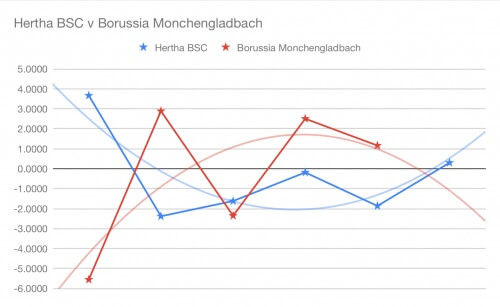 The consecutive negatives produced by Hertha, are evident. However, the upward curve towards positivity is within reaching distance. After weeks of uninspiring performances, Hertha Berlin has the opportunity to produce consecutive positive performances for the first time in the 2017/18 season. The extremes are laid bare for all to observe, the good the bad and the ugly. The extracts of brilliance, are overshadowed by the sub-standard performances put forward by Monchengladbach. The improvement from the numbers in the 2016/17 season is clear, offensively ‘Die Fohlen’ are more productive. However, their defensive woes are still evident. Elements in which the neutral fan needn’t worry, but may benefit. Can we expect an action-packed game from the data which has been presented? If both teams continue on their expected paths, we may well experience a treat.

Check out VOdds to directly place your bet on this match or contact us for further information.