I’ll admit to being a Walcott-sceptic. His “I’m a real striker” shtick never came across as particularly convincing for me. However, I know folk who are very keen on him, and young (not-so-young anymore) Theo has racked up 5 goals in just 9 games so far this season. There are some who think he’s finally arrived.

I intended to spend this week’s article delving into the stats to see whether that was really the case. Maybe, actually, he arrived four years ago.

At the moment, Walcott is scoring 0.6 goals per 90 minutes, with a conversion rate of around 17% – this is probably reasonably sustainable for good strikers (good can either be because they’re getting good chances or because they’re good finishers), certainly not something to get concerned about.

He’s setting up 0.2 goals per 90 (not a whole lot, but assist totals are generally smaller than goal totals). These combine for a goal contribution of 0.8 per 90 – which is pretty impressive. If he keeps it up, he’ll be giving Arsenal almost a goal a game (4 every 5, to be more precise). The question is, of course, can he keep it up.

Because my memory is bad and I didn’t want to have to try and find reliable sources of historic injuries, I looked at how much he played in each season, both the number of 90s, and the minutes per appearance. 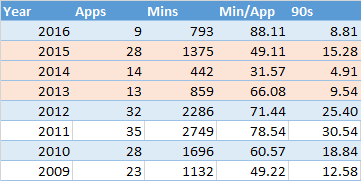 The years in red, 2013/14 to 2015/16, are the ones I’m classing as injury hit. Minutes-wise, he barely played, and when he did it looks a lot like it was as a sub – which either suggests being out of favour or recovering and in need of a slow re-introduction to football.

These are Walcott’s basic stats from the (relatively) injury-less years.

You can argue about performances, but I’m sure ex-pros and other proper football men would prefer to point to the cold, hard, goal-based results; and Theo’s been producing these! Solid results, without even riding suspiciously huge shot conversion rates.

However, it all turns into a tragic tale when you add just one more column into the picture – his age (I’m giving his age at the start of the season, as his birthday is in March).

A player’s peak years are, on average, supposed to be from around 24-28. That’s about four or five years when mind and body mesh together at optimum levels. But not for Theo.

So, Walcott’s totals are good for years he hasn’t been injured in. There’s possibly an argument to be made about the combination of injury and not a starter (due to youth aged 21 and younger) meaning that we don’t have that many proper seasons worth of data on him. Maybe part of those two good seasons, and his current one, was a fluke after all.

Insight on that would have to be given by better minds than mine, with better data to match. However, it does lead me on to something else of interest in Walcott’s numbers.

I’m not aware, at the moment, of any work looking at how often a player’s key passes are converted. Paul Riley noted all the way back in 2012 (in the summer following the 2011/12 season) just how devastatingly effective Walcott’s key passes were.

Mesut Özil’s key pass conversion for his 7 full seasons of data available (excluding this year’s premature campaign) is about 13%. Messi, who due to skill and team quality, always has turbo-charged stats, has a figure around 20%. Walcott’s average from 09/10 to 12/13 is 23%. If I were to hazard a guess, I would say that key pass conversion has a lot to do with where you play – if you’re Messi or Walcott, a larger proportion of your key passes are likely to be cut-backs to the danger zone, whereas Özil is deployed outside of these areas.

It could be that Özil (or similar) are key in Walcott’s key passes being so effective, splitting defences with a ‘pre-assist’ and leaving Walcott with a relatively simple cut-back to do. It could be that Walcott has something elite in him that lets him be in these positions in the first place. Either way, this probably helps understand why some people really like Walcott a lot.

I, I must admit, am yet to be convinced.