While Leicester travelling to Anfield looks a tasty way to round off next Saturday, the match that everyone will be most interested in is of course the Manchester Derby. It’s a game on a knife-edge. United’s home advantage and big names balanced by Guardiola’s aura, tactical nous, and squad.

United go into the match as 2.35 favourties with City at 3.37 and the draw 3.35. Who will come out on top, or will the teams be happy with a draw so early in the season?

The fact that it is so early in the season makes it harder to predict how the battle will go and how the two sides might adjust to each other. We saw last week that Manchester City fielding notably inverted full-backs is not a certainty. It’s probably reasonable to expect that they will move into the centre when City attack as a line of defence against counter-attacks, either stopping them in their tracks or forcing them wide to slow them down or simply to move them into a less threatening area.

It’s likely, though, that they’ll be shoring up the right side of their defence. United’s touches on the ball slightly favour their left side, as shown in the diagram below on the left. 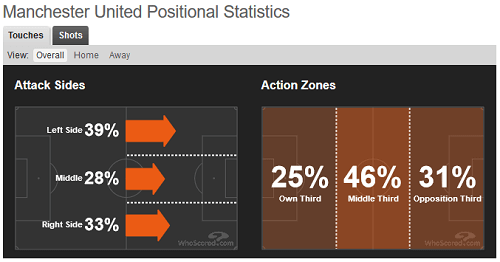 (Manchester City’s touches are similar in that there are more touches in wide areas than the centre, but there the split is more even between wings, going 37%-27%-36% from left to right). United’s left-leaning tendencies are even more apparent in their shot locations. 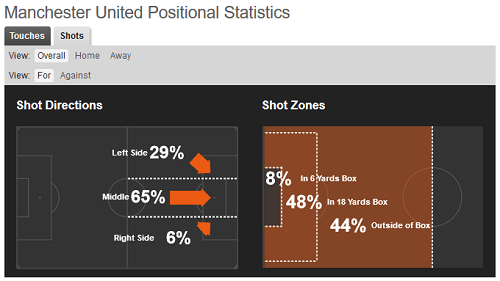 When you consider how Manchester United line-up, this isn’t wholly surprising. The line of players behind Zlatan Ibrahimovic is Martial-Rooney-Mata; a forward placed wide who will always look to cut inside, a former striker who will look to make runs past Zlatan when he comes deep, and an attacking midfielder more prone (and able) to coming inside and rotating with forwards than beating a full-back.

Is it possible that this distribution of touches and shots – and the system which has produced it – make United a bit predictable? If a team were to concentrate on defending their right flank and, as a result, left their left a little more open would United exploit this? Antonio Valencia, who seems like he’s established himself as United’s current first choice right-back, has had a total of one shot so far this season (it was blocked), and 3 of his 4 key passes were crosses. Without being disrespectful to Valencia, City will probably feel fairly comfortable leaving him free as an attacking outlet on United’s right in order to ensure that they have a strong defence against United’s centre and left side.

Perhaps the derby will see the first competitive start for Henrikh Mkhitaryan, though. With an easy run of games, is it possible that Mourinho withheld the new signing to prevent Guardiola from studying his inclusion in a United system during the lengthy international break? That might be straying a bit too far into conspiracy theory territory, but then this is Mourinho.

We’ve already mentioned how City’s touches are more balanced across the width of the pitch, and the same is true of their shots as well. 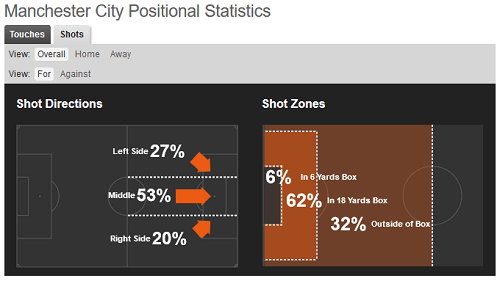 Fewer of City’s shots have come centrally than United’s, and the share on each wing is roughly even, which is probably a result of the strength Guardiola has in those wide attacking positions. Sterling and Nolito, with possible contributions from De Bruyne as well, make the side a formidable opponent across the width of their attack. With Aguero suspended for the Derby, it’s possible that the shot distribution could be even more even.

A larger proportion of City’s shots have been taken from inside the box too (68% to United’s 56%), which is of course preferable, but their opponents have also taken a higher share of their shots in the box too – 66% as opposed to the 50% of Manchester United’s opponents’ shots that have been taken inside the area so far this season. Both sides have similar shot differences too – on total shots City stand at +8.7 per game and United +7.3; shots on target City stand at +3 per game while United are at +4.

The preparation done by the two sides, and their managers in particular, will be key, but this could be a very tight game indeed.