With Manchester City’s race to break records, a gripping Top 4 race, and most of the rest of the league embroiled in a relegation battle, some overseas stories have slipped a little more under the radar than they usually would have this season.

Real Madrid’s bizarre stuttering in the league this campaign is one of them – it’s been noted, sure, partly via the Arctic cold scoring streak that Cristiano Ronaldo was on – but it’s not been looked at in much great detail.

Part of what makes Real’s miserable run – currently battling with Valencia for third place – so bizarre is that their underlying shot stats are not just good, they’re *very* convincing. 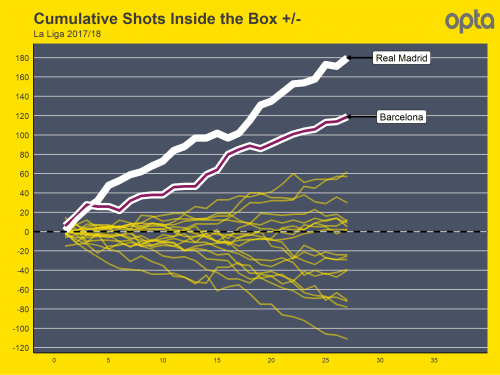 This is a pretty similar distance away from the rest of the pack on this stat as Manchester City are. However, it’s important to note that Real obviously haven’t spent as much time as they’d like in winning positions and have spent more time chasing games which may lead to a stat-boosting effect.

If Cristiano and his team-mates (Cristiano particularly) are chasing a game, they’re likely to be less choosy when taking shots – so, taking them from worse positions – and if the opposition is defending a lead, then they’re more likely to have men in the way to either block shots or put pressure on the shooter.

If we look at the rate that the two teams are converting their chances, there are a few things that stick out. 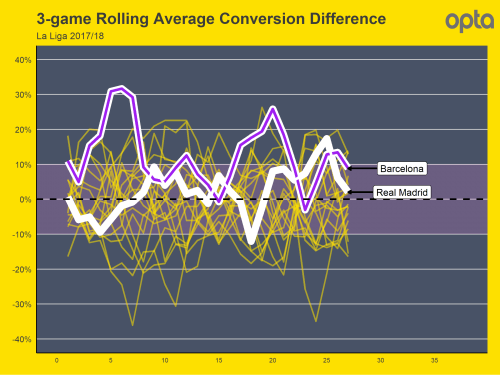 Given that teams like Barca or Real will be creating better chances than their opponents, it would be generally expected for their lines to – most of the time – be between 0 and +10%.

Barcelona has had several peaks of *huge* ‘rubs of the green’, converting their shots at a fiery hot rate while their opponents barely find the back of the net.

Over the course of the season, they’re scoring nearly 17% of their shots. The average tends to be around 10-11% or 1 in 10 shots – Barca is scoring just under 1 in 6(!). Their opponents, meanwhile are converting at a rate of just under 5%, or scoring just once every 21 shots.

If that wasn’t already bad enough for Real, their other big rivals, this time closer to home, Atletico, have almost exactly the same conversion rates on both sides of the ball.

Thanks to their sudden remembering of how to find the back of the net in mid-January, starting with a 7-1 rout over Deportivo de La Coruna, Real have a conversion rate in the attack of just under 13% and their opponents have one of nearly 11%.

And this seems to be a major part of what is driving this weird situation in La Liga at the moment. For a side of their quality and stature, Real Madrid has a fairly average difference between their and their opponents’ conversion rates, while their two biggest rivals are running (likely) unsustainably hot.

The word likely is inserted there as a disclaimer, but only two teams in La Liga in the past three seasons have ended the year with a conversion difference north of +10%, Barcelona in 2014/15 and Barcelona in 2015/16, and even then they were barely over the threshold. This season’s Barca and Atleti are running at +12.3% and +11.1% respectively.

Neither Atletico nor Valencia (currently running at a +6.8% conversion difference) has stunning shot stats, only outshooting their opponents by a smidge per match in terms of shots on target and shots inside the box.

Any normal season and you’d expect Real Madrid, with these shot stats, to be up at the top fighting things out. But they’re not. Football, eh.

Discover an easy way to bet with the best prices and massive limits! Check out our hassle-free Skype Betting.