There are two sides to the argument about whether the current Manchester City side is the best that the Premier League has ever season.

The first is to say ‘yes, they are, look at how they’re playing.’

The other is to say ‘no, they haven’t won anything yet’.

Below is a plot of every team from the Premier League since 2000/01, and La Liga and Bundesliga from 2005/06 (data from football-data.co.uk), plotted by shots taken and shots conceded per game.

There are lines showing the average rate of each, as well as the 95 and 99 percentiles – ie the best 5 and 1% in the sample. Being close to the bottom left is best. 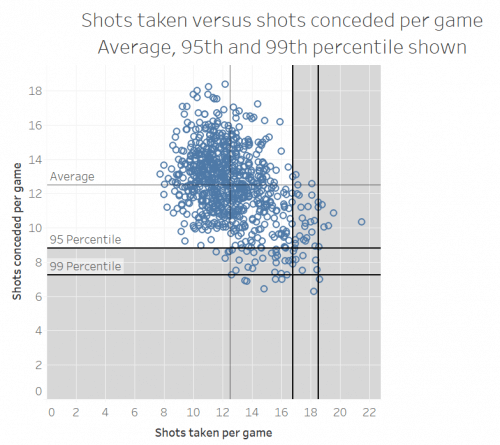 There’s only one team in the past decade-plus of these three leagues that is in the top 1 percent for both counts, in the bottom left black rectangle, and that is Barcelona of 2008/09.

The dot just to the left and a little below it is current Manchester City (after 18 games of this season).

This is a little freakish in itself – there are no other sides that are over the 99 percentile in one of the measures as well as being over the 95 percentile in another.

The other teams that are some of the all-time big guns for either shot creation or shot prevention, tend to be a bit more normal on the other count, but also have a clear pattern.

Take, for example, the other teams who are over the 99 percentile for shots taken per game. They are, in alphabetical order:

A distinctly Madridian flavour there.

Flip the tables to look at the other sides who are over the 99 percentile for shot prevention, and you get a very different look.

Very English. Stupendously English to be the only sides – Guardiola’s City and Barcelona aside – to be conceding fewer than 7.26 shots per game.

This doesn’t necessarily mean that these sides were supremely dominant in their all-round games. Arsenal of 2004/05, for example, was just a smidge above the average for shots taken per game, 12.6 versus 12.5.

Looking at the small bunch of teams who are between 95 and 99 percentiles on both sides of the ball gives a much more expected list of good teams:

You may wonder where the rest of the Guardiola Barca years are. His City years have appeared; his Bayern Munich years have all featured.

It’s possible that Guardiola’s teams in these years may have taken decisions not to shoot as often if they didn’t need to, but still maintained their vigilance in preventing their opponents from creating chances.

Or maybe (whisper it, maybe), Guardiola is closer in mindset to English coaches than we thought.

Discover an easy way to bet on Premier League, with the best prices and massive limits! Check out our hassle-free Skype Betting.