Browsing through stats can sometimes yield some very interesting results. For example, Arsenal and Manchester City both have very high conversion differences – the % of their shots that go in minus the % of their opponents’ shots that go in. It seems, from my experience, that anywhere between -4% to +4% is what any old team can get, and the reasons for it may be hard to discern; anything below the bottom end or above the top end, though, are eye-catching.

Arsenal currently have a conversion difference of +5.36%, while Manchester City’s is +6.71% (you may remember my article from last week focussing on Leicester where it was noted that Leicester conversion rate in their title-winning season of 6.10% was the 3rd highest in a full Premier League season since Opta records of this kind of thing began in 2009/10).

The amusingly coincidental part of this is that both of these high conversion rates are driven primarily by their offences, with both Arsenal and City having a conversion rate of their own shots of 15.7% (the average being around 10%).

Obviously, if you’re creating better chances you’ll probably have a higher conversion rate, but it’s an interesting opportunity to compare the two sides at the top of the table.

To do so, lets first take a look at where all of the goals in this Premier League season have been scored so far (thanks to Paul Riley’s tableau tool). You might have seen something like this before in order to illustrate the principles of Expected Goals, but it’s worth showing again. 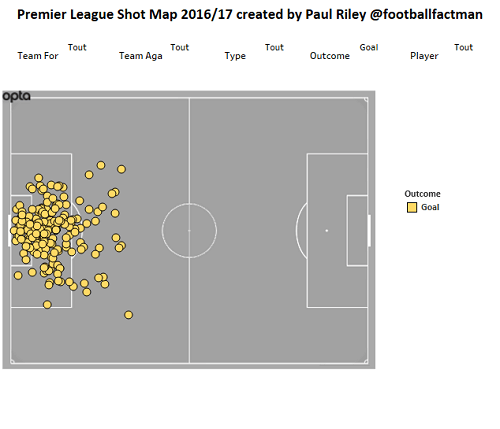 It’s easy to see why ‘danger zone’ shots are valued so highly – that’s a huge clump of goals in the centre of the box, anywhere from 0 to 12 or 14 yards out.

Now, let’s look at a team who are pretty much bang average in terms of their conversion rate from their shots. Again with the coincidences, considering the teams we’re aiming to look at properly, one of the teams that best suits this is Manchester United, whose conversion rate is 10.16%. 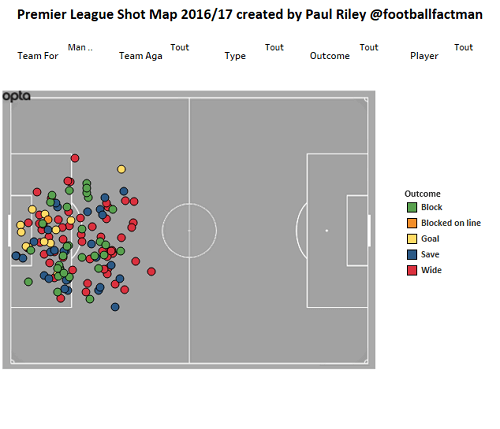 You can see that United’s goals largely follow the pattern seen in the ‘all goals’ image. There’s an interesting clump in the corner of the box where players like Anthony Martial are likely to be shooting from, cutting in from the left side, which isn’t mirrored on the other flank. Dots coloured by their outcome aren’t a full picture of the quality of the chances, but they’re a start, and it looks by a rough eye test that about half of United’s shots in the danger zone are going in.

You can also see why the statosphere isn’t wholly keen on shots from distance – they seem split pretty equally here between being on target, being blocked, and being off target. Only Zlatan’s goal against Bournemouth was converted from range.

So let’s look at Arsenal and City’s maps, one after the other (for size of image reasons). 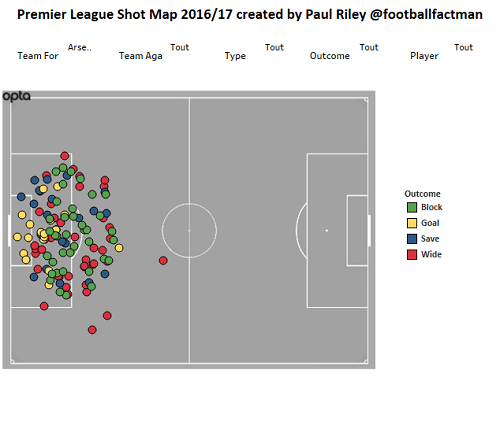 Again, most of Arsenal’s goals have come from the danger zone area, but there are a few from wider angles too. It’s certainly not as if their conversion rate is so high because a ton of their speculative shots from distance have somewhat fortunately flown in though.

It looks a little like there is a larger proportion of yellow in the danger zone than for United. This might be due to better chances, but you’ve got to think that the scoring rate of chances in the six-yard box will slow down. 6 of Arsenal’s 8 six-yard shots have turned into goals, against 5 of 11 for United.

If we switch to City, there isn’t a lot that looks strikingly different to Arsenal’s map. 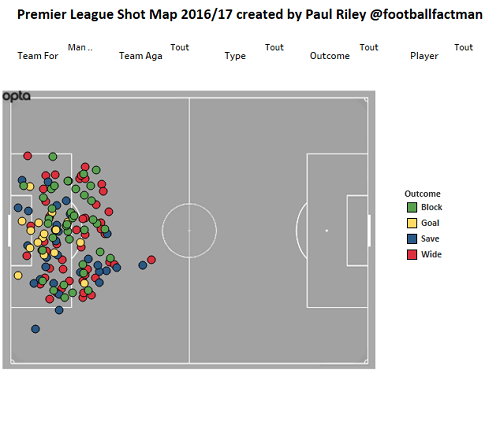 City’s shots perhaps feature a few more from wider angles in the 18-yard box than Arsenal, but again most of the yellow dots denoting goals are in the danger zone with a small handful outside of it. The proportion of danger zone shots that are converted is probably roughly similar for the two sides, although if we go back to the more easily countable (thanks to WhoScored) six-yard box shots, only 3 of 8 City close attempts have become goals.

You’d expect both Arsenal and Man City’s conversion rates to come down at least a little, I think. It’s hard to say without more advanced data. Arsenal’s six-yard rate seems like an obvious ‘something unsustainable’ though. Given the history of conversion differences in the Premier League though, whoever keeps theirs up might be the one to win the league.

This reminds me of something I tried and tweeted about a few months ago. 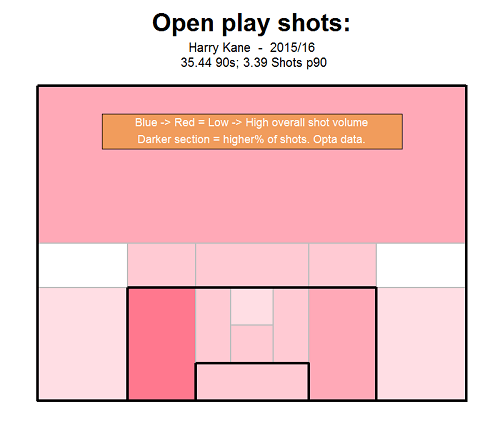 The idea was that looking at maps of all shots players or teams take can be confusing, because both different total amounts of shots as well as where these shots are taken effect how they look. The point was to try and improve this. Garry Gelade later did something pretty similar (and better and more rigorous) here.

Sample sizes may make it difficult, but I thought I’d bring it up again as it was relevant to the article and it was a shame that I couldn’t take these ‘shot heatmaps’ any further than I did. If anyone with expertise and data wants to give them another go, please go ahead.