A Return to the Eternal City

There was an immediate sense of inevitably that AS Roma’s re-signing of Lorenzo Pellegrini would be a success.

Aside from being born and raised in the Eternal City and rising through the Giallorossi’s youth academy as a youngster, the Italian had also crucially worked with the club’s newly installed manager, Eusebio Di Francesco, for the previous two seasons at Sassuolo.

“He’s very clear in his ideas and he always tries to be true to himself. He gave me a chance to play over the past two years and taught me never to rest on my laurels and to always try to do more. That’s vital for any player or coach,” a grateful Pellegrini said on Di Francesco.

The combination of being familiar with his beloved club and well versed in Di Francesco’s possession, position based philosophy has duly seen him make a very encouraging start to life on his Roma return.

Making his Serie A Wolves debut against Hellas Verona a couple of weeks ago, the dynamic 21-year-old wasted little time showing off his capabilities and depicting what an instrumental figure he’s set to become to the squad.

From his customary right-sided central midfield role, Pellegrini’s movement, stamina, relationships with his teammates and dynamism saw him continually pose a threat to his opposition. The way he and right winger, Cengiz Ünder, would perform subtle rotations, in order to create space in the channel for Pellegrini to run into, was a tactic that was hugely effective (refer to below graphic). 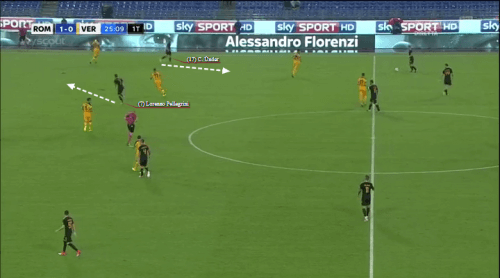 Moreover, his astute reading of the play and positional sense also saw him persistently find vacancies in the right half space, where he’d take advantage of his marker in Marcel Buchel getting drawn towards the ball so he could receive freely (as shown in the image below). 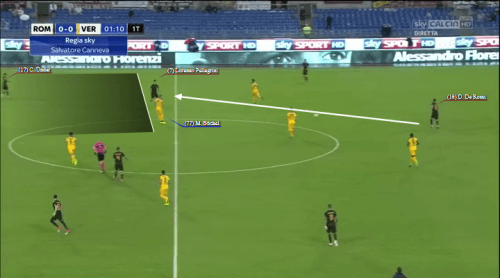 Further highlights from his bow arose from his sharp passing skills, running power with the ball at his feet and his vigorous defensive pressing. “When it’s your first match, you always want to do well. It was really important that we won and we did, so it was the kind of day I’d dreamt of. It was the perfect Saturday,” explained a delighted Pellegrini after the match.

Thereafter, he’s importantly built on his strong start by putting in promising shifts in Roma’s vital wins over Benevento, AC Milan and Qarabag in the Champions League.

The fact Roma were able to sign him for a fraction of his worth, paying just €10 million due to the shrewd club inserting a buy-back clause when he was sold to Sassuolo, definitely make him one of the best deals of the window.

Although competition in Roma’s midfield is fierce, with the likes of Radja Nainggolan and Kevin Strootman to contend with, Pellegrini’s unquestionably going to play a key role in his team’s very busy season.

All things considered, Pellegrini’s return to Roma is, without doubt, a match made in heaven.

Discover an easy way to bet on Premier League, with the best prices and massive limits! Check out our hassle-free Skype Betting.