Courtesy of his sensational form for Brentford, which has seen him score 18 goals in 28 Championship appearances, it comes as little surprise many Premier League clubs are keen on signing Ollie Watkins in the January transfer window.

With the likes of Sheffield United, Crystal Palace and Aston Villa all circling, it would’ve been music to the ears of Bees fans that manager, Thomas Frank, is extremely confident the gifted attacker will stay at least until the end of the season. “Of course Ollie’s form will attract interest, but I see no reason why he should want to leave this month,” Frank insisted.

“Sometimes in life you find yourself working at a special place and that is what we have at the moment. A player as good as Ollie will get more than one opportunity and I am very hopeful he will remain with us until the summer at least.”

Considering Brentford are sitting in fourth place in the table and are well and truly in the hunt to earn Premier League promotion, which they haven’t achieved since the 1946/1947 campaign, it makes sense the club’s desperate to keep their strong squad together.

In absolutely brilliant form this season, Watkins has been one of the most outstanding performers in the division, as he’s adapted superbly to being shifted from the wing into the striking role. Stepping in beautifully to fill the void left by the departing Neal Maupay, the 23-year-old’s transferred his dynamic skill set wonderfully to his new station.

Despite a period of adjustment to begin with, he’s now right up to speed with the demands of being a centre forward, with his goal haul a testament to how well he’s doing. “I didn’t think it was going to be me that was going to be the next person to play there, but I’m enjoying it. I’ve been told a few times that people think I’ll become a No 9 but maybe a bit later on in my career. Hopefully this is the time that I do because I’m loving it at the moment,” he told Sky Sports.

“I’m in the box a lot more and I get the striker goals, as you would say, but my manager has helped me and the coaching staff, even the players that trust me to play in this position.”

Using his technical qualities excellently, Watkins’ usually sound touch, awareness and control have ensured he has a strong base to launch good shots on goal. Clinical and instinctive inside the box, it’s hard to tell he’s not a striker by trade, for he’s produced some marvelous finishes. Be it neat placed finishes, powerful drives, composed 1v1s with the keeper, sharp tap ins and more, the Englishman’s taken his chances admirably from varying areas. 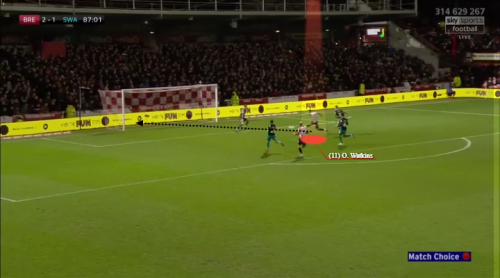 Strong and well balanced, this has duly helped him remain steady while shooting so he can withstand incoming pressure.

Meanwhile, in terms of his passing and dribbling, these have only added to his worth, as he’s been able to link play coherently when dropping deep, play some incisive through balls to his fellow attackers and use his 1v1 dribbling to unbalance backlines. To focus on his dribbling, and this has been especially influential, for his array of skills and athleticism combines to see him frequently beat his man to wreak havoc in the final third. 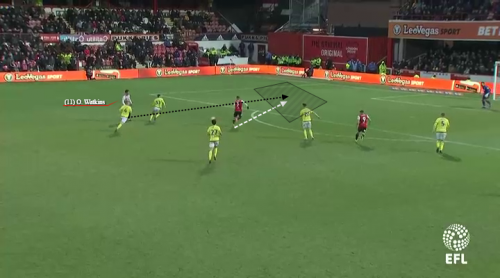 Top through ball in behind to set up a chance 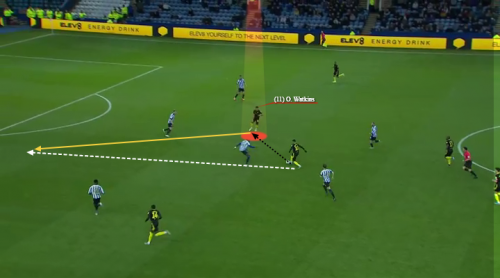 Another aspect of his game that has really shone brightly has been his intelligent movement, something that always gives Brentford plentiful dynamism and impetus going forward. A massive threat in behind due to his searing pace and ability to time and direct his runs, Watkins is so tough to stop for defenders. So good at gaining separation by targeting gaps between defenders, exploiting the blindside, using double movements and dummy runs and by rotating with teammates, this compounds issues for his foes. 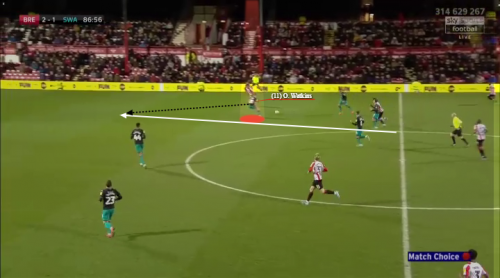 Ollie’s superbly timed run in behind 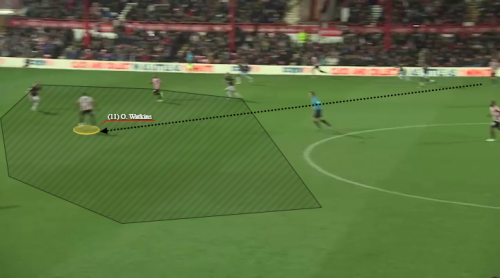 Forever stretching and pulling backlines out of shape to increase his chances of latching onto passes and subsequently scoring, once he has room and good service he’s nigh on impossible to catch.

Moreover, for a winger who’s usually delivering the crosses, the way he takes up good positions inside the box has provided extra reason for positivity, as he picks up the ball’s flight smartly to adjust his runs and body shape to give himself the best possible chance of scoring. 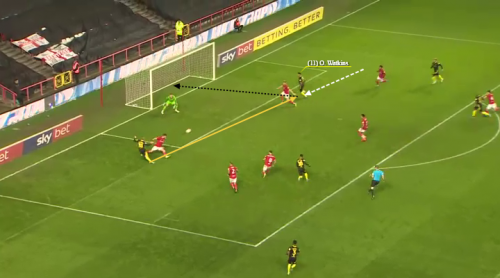 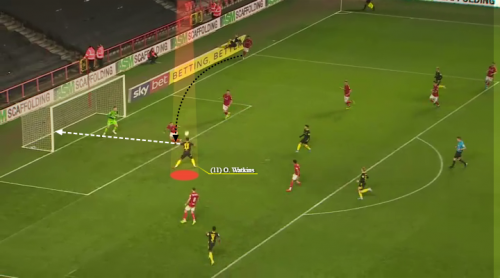 Watkins’ impressive statistics illustrate what an asset he’s been, for he’s second on the scoring charts, second for combined goals and assists on 20, is third for Expected Goals, first for percentage of shots on target on 47.89%, first for touches inside the box on 138 and is seventh for shots taken with 71.

Not one to rest on his laurels, Watkins recognises there’s still room for improvement in his game. “I feel like maybe my hold-up play isn’t as good as a target man because I don’t feel like I am that. I like to run in behind and that’s my strength, but I’m trying to work on my hold-up play and if I can do that, I think that’s something else I can add to the team.”

Having bagged eight goals in his last 12 appearances, there’s certainly no sign of the explosive Watkins slowing down anytime soon, as he’ll unquestionably be an integral figure towards Brentford’s chances of securing their long awaited return to the English top flight.