By scoring a hat-trick on his Champions League debut for Red Bull Salzburg, the gifted Norwegian Erling Braut Haaland emphatically announced himself on the big stage.

Putting Genk to the sword in Salzburg’s 6-2 demolition of the Belgian side, he amazingly became the third youngest player to bag a UCL triple behind only Raul and Wayne Rooney. Moving his tally to 17 goals from his 10 games in all competitions, the son of former Leeds United and Manchester City player, Alf-Inge Haaland, has certainly began the 2019/2020 in sensational fashion.

An incredibly gifted young centre-forward, Haaland’s such a nightmare for defenders to handle, for his multifaceted skill set ensures he can hurt opponents in many different ways.

Standing a towering 191 cm, the imposing Norwegian’s physicality is a huge weapon of his. So strong and well balanced, he relishes individual duels, where he uses his body and arms to unbalance, outmuscle and fend off his adversaries.

Accompanying this with his athleticism, the powerful 19-year-old’s pace, acceleration, leap and agility only enhance his threat.

To focus on his movement, and there’s plenty to admire about his work here. A huge threat with his crafty runs in behind, he’s quick to identify any openings within the opposition block. Once he sees a gap, he’ll immediately angle his run into the vacant space to be an outlet. It’s also important to note how well he exploits the gaps between defenders and their blindside, as he smartly gains separation to give himself an edge. 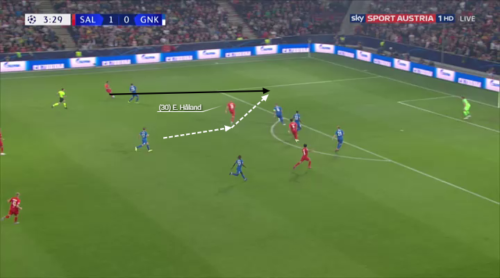 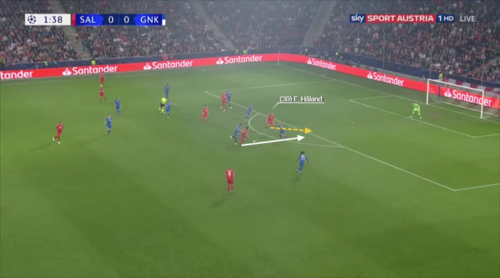 Erling’s crafty run in behind

In addition, his instinctive positioning inside the box means he gives his teammates a good target for crosses and cutbacks, as he can hold his run back or bomb forward to meet the ball ahead of a defender. 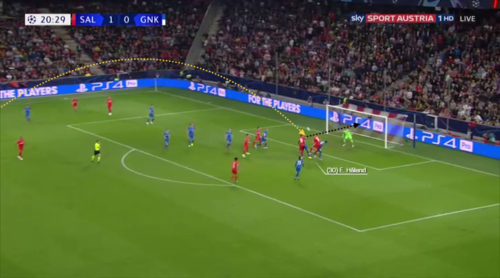 Haaland also drops deep effectively to link midfield and attack. Swift to spot when a passing lane is open for him to be able to receive a vertical pass, he times his checks towards the ball carrier well. Working cohesively with his fellow frontmen, he often gets into good positions to receive lay offs while facing forward so he can add momentum into upfield forays. 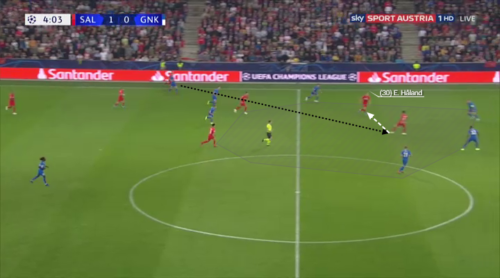 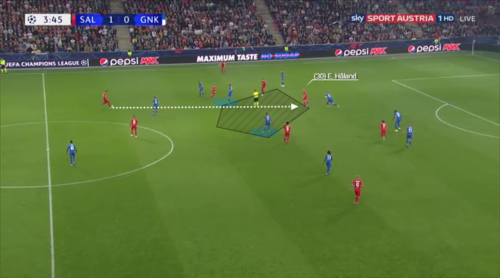 If support during any of Salzburg’s attacks is required, it’s been good to see him help out on his way to often creating 3v2 or 4v3 overloads. Lastly, his knowledge of where his teammates are located, means he’s been able to strategically pin and draw trackers to generate room for others to use. 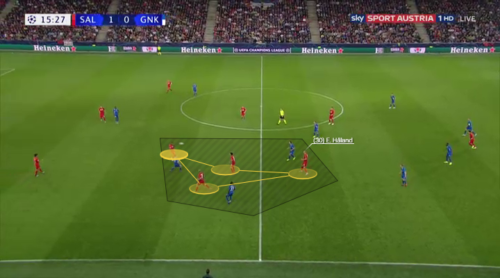 Erling’s helping to create a 4v3 out wide 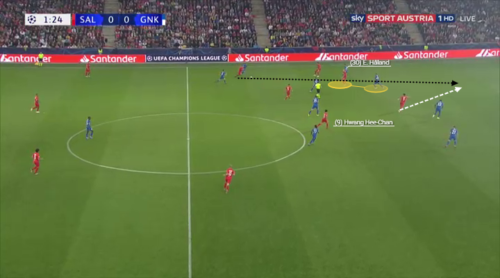 Erling’s drawing his man to make room for his colleague

Meanwhile, when it comes to his output with the ball at his feet, he’s proven he’s very competent. Possessing neat touch and control, the imposing figure’s demonstrated how he can emphatically beat markers on the dribble. Rapid off the mark and such a threat in transition, opponents struggle to combat him, as he can beat them with clever touches or searing changes of pace and direction.

Moreover, his passing is full of upside, for he can combine tidily with one and two touch passes and even play some incisive through balls in behind. Even though he’ll be keen to refine this aspect of his game further, Haaland has a solid base to build from. 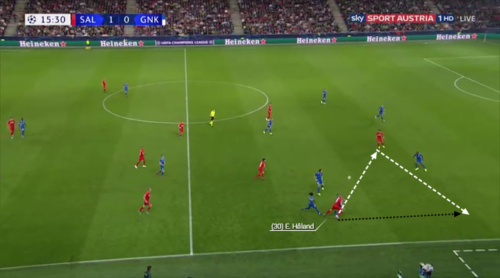 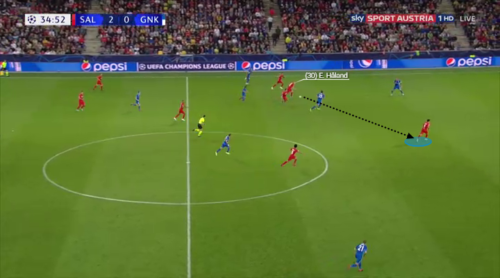 A clinical finisher to boot, he can crucially score a wide variety of goals, including cool finishes when 1v1 with the keeper, domineering headers, slick tap ins, calmly placed efforts or driven blasts. 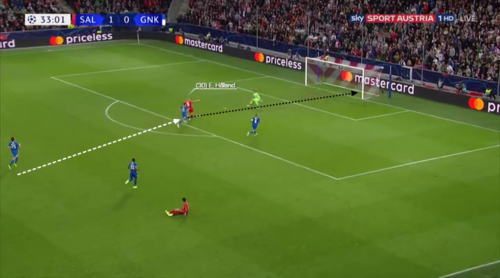 Teammate Maximilian Wober summed up what a special talent Haaland is by saying: “He is phenomenal. With his height, to be so nimble and have such command of the ball. It’s really hard to play against him in training – you just have to foul him. Once again he proved why he’s definitely going to become one of the best strikers in the world.”

Drawing attention from many of European football’s elite outfits, the man who’s already won his first senior cap for Norway will certainly have no shortage of suitors when the time’s right for him to leave Salzburg.

But until then, you can guarantee he’ll be doing everything in his power to keep developing his game so he can one day fulfil his ambition of becoming the world’s best player.