The league table lies. It purports to be the ultimate authority, but I’m not so sure. It gives out results of who the best and worst teams in the league are, but where is the thesis, where is the methodology, where are the error bars? Has it been subject to peer review? I think not, and I think it’s time we started calling it out on it.

I’m willing to believe it gets the top and bottom right, it’s the in-between I’m bothered about. I trust the league table to call a spade a spade and a wooden spoon a wooden spoon, but can it tell the difference between an asparagus fork and a granny fork?

This season, for example, Watford’s spring collapse will put them in the record books as a 17th placed side with Swansea, who for so long looked mired in a relegation fight, will benefit from the number 15 in the ‘finishing position’ column. Is it right that West Bromwich Albion, who at one point had Arsenal and 6th place in their sights, end up in 10th?

“Yes,” you may say, “That is the point of a league table.” Ah, you silly child. If we left the table at its word then what would we talk about all summer?

Instead of ordering the table by points gained throughout the system, a more accurate picture of the bottom two-thirds may emerge if we look at how long it took clubs to gain safety.

It may not surprise you to learn that Chelsea gained mathematical safety the earliest, 25 games into the season. The break-up of a regular fixture schedule around this point of the season complicates things slightly, but the rest of the top 6 all gained safety after either 27 or 28 games. Everton reached it after 30.

And then, there comes a stab through the heart of tabular propaganda. Here are league positions 8-13 and their corresponding ‘safety positions’.

Definitive proof then, in this quest for justice, that the league table (or Tony Pulis in the latter stages of the season) is not to be trusted. However, this still doesn’t solve the Swansea-Watford problem, given that both of these sides only became mathematically safe after 37 games.

But really, let’s be honest here. When has “it’s still mathematically possible” ever translated into “it’s actually happened”. Hull, the eventual 18th side, only won a point per game in the last 10 games of the season and jumping up to a rate of two points a game would get you top 4 football over a whole season.

Never has a Great Escape come from winning ever single game, but they have come from which, had it been carried through all 38 matches, would propel sides towards European football.

The top 7 is still somewhat predictable and boring. Chelsea becomes ‘realistically’ safe after 21 games, Tottenham and Manchester City after 24, Liverpool, Arsenal, and Manchester United after 25, and Everton after 28.

After Everton, as with the mathematical safety, it’s West Brom after 29 games, then Southampton after 31, but then – in what a league table spokesperson called ‘fake news’ when we called for comment – comes Watford, ‘realistically’ safe after 32 matches.

That middle-to-bottom of the table gets a bit messy in this measure, so here’s the table in its entirety. 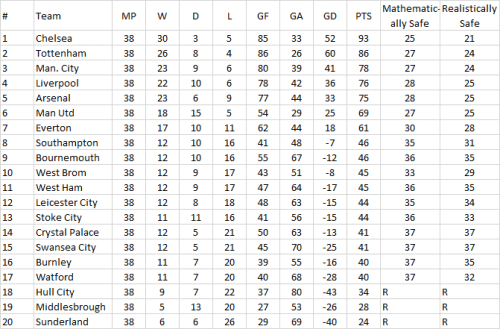 Bournemouth and West Ham are perhaps as equally interesting as Watford and West Brom. For part of the season, it looked as if Bournemouth were slipping towards a relegation battle, but two draws and wins against Middlesbrough, Sunderland, and Burnley in the last 5 games gave them a strong finish, taking advantage of other teams already being on the beach.

West Ham only became ‘realistically’ safe after 35 games, and then in their last 3 they picked up two further wins against Tottenham and Burnley. Both Bournemouth and West Ham’s victories over Burnley came after the point at which Burnley was ‘realistically’ safe.

The league table lies. I told you so.